2018 Hyundai Kona review: A smart buy with a wacky face

Don't let a polarizing appearance turn you away from what is one of the best cars in its segment.

There aren't many automakers out there willing to embrace the truly weird. Nissan did it with the Juke, but now that cute ute is heading off into the sunset. It's time for someone else to step in and assume that weird-but-lovable role. Enter the Hyundai Kona.

The Kona has serious get-up-and-go with the turbo engine, and you can get a metric tonne of great features for under $30,000.

It looks like one car birthing another, and it's pretty low on cargo space.

If you can dig the Kona's looks, I guarantee you'll dig the whole package.

The Hyundai Kona looks odd, but that weirdness is only skin deep. Underneath, it has great features at a great price, and it's pretty great to drive, too. Hyundai's usual bag of tricks helps vault this car to the top of its segment in short order.

The Kona's exterior is a hot mess, but one with a purpose. The Kona is just unusual enough to turn a head and have a random person quip, "What is that thing?" Sometimes, that's all it takes to start a person down a path to ownership.

Hyundai's newcomer packs some pretty aggressive angles, but my eyes keep landing at certain spots. Split headlights are nothing new -- the Jeep Cherokee comes to mind -- but Hyundai wraps the lower lights in gray cladding that makes the fascia look like it's trying to spawn another car. It's busy, but I like it. The back is messier, with most of the functional lights hanging out well below the beltline. There's also one of those "floating" D-pillars that seemingly every automaker is apparently determined to add to at least one car in their lineup.

But once you open a door, the weirdness disappears. The interior is pretty traditional, with sensibly located (and easy to operate) vents, comfortable seats and plenty of physical switchgear. I like that my Ultimate-trim tester comes with just the right amount of lime-green trim and stitching, bringing some of that exterior eccentricity inward. The front seats are plenty spacious, but the rear surprises me with enough space for a 6-foot-tall passenger to sit behind a 6-foot-tall driver without rubbing knees against seatbacks or heads against headliner.

The biggest problem with the Kona is its cargo space. Simply put, 19 cubic feet is lacking -- in its segment, only the Mazda CX-3 has less cargo space, and that car is about the size of my shoe. It doesn't get any better when you fold the rear seats flat, either.

The Kona's bottom two trims make do with a 2.0-liter, naturally aspirated I4 putting out an ample-enough 147 horsepower and 132 pound-feet of torque. But my tester sports the optional 1.6-liter turbocharged engine with 175 hp and 195 pound-feet. In conjunction with its optional all-wheel drive, this thing scoots. It's way more fun to drive around town or on the highway than almost anything else in this segment.

My only handling complaint is that it takes a surprising amount of effort to keep the Kona centered in its lane. That said, I find the steering on the pleasantly heavy side, and both throttle and brake are nicely weighted and easy to modulate.

Cheaper cars tend to have issues handling bad roads, but the Kona's suspension does a commendable job across Michigan's Martian landscape, conveying very little jostling into the cabin. But what it lacks in harshness, it more than makes up for in noise. Wind noise easily sneaks into the cabin, as does additional clamor from its 235/45R18 all-season tires. Turning up the stereo helps, but it doesn't eliminate the problem.

Thankfully, the Kona once again redeems itself with fuel economy. The EPA says the 1.6-liter, AWD Kona will achieve 26 mpg city and 29 mpg highway. I'm right about on par with city economy, but once I hit the highway, I see numbers in excess of 30 mpg with little conscious effort.

10 pounds of features in a 5-pound sack

Hyundai is really good at loading its cars with all manner of features not usually found in cheaper segments, and the Kona is no exception. This egalitarian nature is especially evident in my tester's range-topping Ultimate trim, which despite being fully loaded still lands under the $30,000 mark.

On the safety front, buyers can pick up automatic braking, forward collision warning, blind spot monitoring, lane-keep assist and rear parking sensors. It's a shame that adaptive cruise control is nowhere to be found, and that the most important safety systems are hidden behind expensive trims. The driver-assist systems work well for the most part, with the exception of the lane-keep assist, which is way too heavy-handed for my liking.

Other notable features include a Qi wireless phone charger, LED headlights, rain-sensing wipers, leather seats and a useful 4.2-inch screen nestled between the gauges, offering up plenty of pertinent information. There's also a head-up display that impresses with just how much stuff it can cram in there (speed limits, driver-aid status, blind-spot monitoring and so on), but it's positioned just above the dashboard on a retractable piece of glass that offers little benefit for tall drivers.

When it comes to infotainment, Hyundai's system is one of the easiest and most accessible, with fast response times and an easy-to-navigate layout. Lower Kona trims get a 7-inch touchscreen, but my tester rocks an 8-incher with embedded navigation; both include Apple CarPlay and Android Auto. It might have a little bit of a cartoony look to it, but its ease of use makes up for just about anything else. 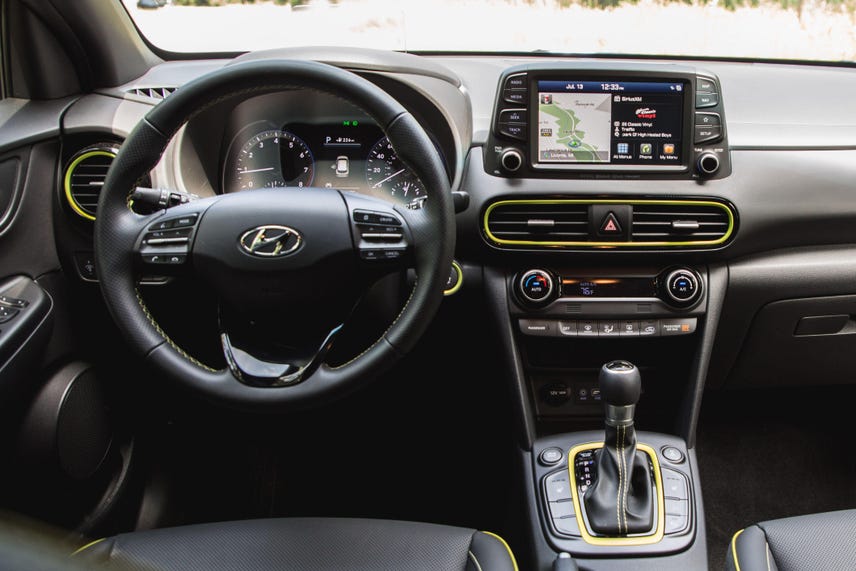 Honestly, I'd spec it exactly like my tester. Even with its $29,775 as-tested price, it's still a solid $6,000 below the average transaction price for a new car, but it's equipped with the superior engine, all-wheel drive and every single feature Hyundai offers -- there are no optional packages on the Kona Ultimate. If you don't want all-wheel drive, you can slice $1,300 off that window sticker. I might swap out the retina-searing neon green paint job in favor of something a little more demure, like red or metallic blue, though.

The Hyundai has a fair amount of competition in a segment that the Juke used to own. The Honda HR-V is fun to drive and offers more cargo space, plus, for the 2019 model year, its driver-assist systems are available on lower trims. The CX-3 is a good driver, but it's somehow even smaller than the Kona. The Ford EcoSport is... fine.

The Kona shines in its segment. Its ride quality is among the best, its features are hard to top and it's spacious from a passenger standpoint. Sure, it might look like one of the aliens from Space: Above and Beyond, and its cargo capacity won't accommodate whole-family cross-country road trips, but its affordable price tag and approachable tech make it absolutely worth your attention.