Ford finally joins the booming subcompact SUV party with the 2018 EcoSport. Is it dressed to impress, or just too little, too late?

Don't let Ford's heavy use of the meaningless "first-ever" marketing term fool you; the 2018 EcoSport is hardly a new vehicle. Based on the 2011 Fiesta, the current EcoSport has been sold abroad since 2012, and its predecessor, initially designed for the emerging Indian and South American markets, has been in existence since 2003.

Smaller than all of its competitors and no more economical. Many interior materials are sub-par, and that swing-out tailgate is a pain.

Ford’s rush job to Americanize its global EcoSport results in a vehicle that’s mid-pack at best.

So why is it just now arriving in America? The simple answer is, you guys really like small SUVs. These vehicles represent the fastest-growing segment in the automotive space right now, and for a mainstream automaker like Ford, it'd be a huge mistake not to offer something in this class.

The EcoSport gets a number of 2018 model year enhancements as part of a global mid-cycle refresh. Are they enough to make Ford's mini-SUV stand out in a rapidly growing segment, or is this all just too little, too late?

Is the 2018 Ford EcoSport too little, too late?

Because of its emerging market roots, where ultra-compact vehicles reign supreme, the EcoSport is small. Like, really small. It has the shortest wheelbase of any vehicle in the subcompact SUV class, and the majority of its competitors are six or more inches longer overall. That's great for tight parking situations or maneuvering through congested cities, but it comes at the expense of passenger and cargo space.

With a six-foot-tall driver or front passenger, someone of the same size will just barely be able to comfortably sit in the back seat. The EcoSport has an SAE-rated 91.1 cubic feet of passenger space, making it smaller inside than everything in is class, with the exception of the super-duper cramped Mazda CX-3. Individual rear head- and legroom numbers are about par for the course, but there's no denying the fact that the EcoSport genuinely feels cramped inside. Chunky pillars and huge swaths of cheap black plastic don't help the claustrophobia factor, either.

You really notice the EcoSport's age throughout most of the interior. Hard plastics line just about every surface, with some questionable cut lines and panel gaps on the dashboard and doors. The seats are narrow and not very supportive, covered in some chincy faux leather. Most of the buttons look and feel outdated, as does the design of the instrument cluster.

There are a number of clever storage solutions inside the EcoSport, with small cubbies for your phone or wallet in the doors and passenger-side dash. There's even a small slot where you can rest a phone horizontally, just ahead of the gear selector and, conveniently, right next to the EcoSport's two USB outlets.

The EcoSport's cargo measurements are simply average: 20.9 cubic feet of space with the rear seats raised, or 50 cubic feet with the back bench folded flat. But because the EcoSport was originally designed to have a spare tire mounted to its rear, the back door swings open to the side, rather than using a traditional roof-mounted hatchback design. The latch is hidden in the passenger-side taillight (thanks for laughing at me when I couldn't find it, LAX parking attendants), and the door itself is heavy to open and close. The swing-out design means you won't be able to open the door all the way in parallel-park or backed-in situations, either. Oh, and while you can get the spare tire carrier on the US-spec EcoSport, but only on the base S model, and a $185 option.

The EcoSport (pronounced "echo-sport") comes with a choice of two EcoBoost (pronounced "eek-o-boost") engines. Front-wheel-drive models come with Ford's 1.0-liter inline-three, with 123 horsepower, 125 pound-feet of torque and a 6-speed automatic transmission. All-wheel drive is only available with an upgraded 2.0-liter inline-four, with a more robust 166 horsepower and 149 pound-feet of torque, also with a 6-speed automatic. If you want the 2.0L/AWD upgrade, be prepared to pay an extra $1,450 for the privilege.

The 1.0-liter setup is mostly fine, most of the time. This engine struggles a bit on uphill climbs, where the transmission revs high, complemented by a cacophony of buzzing and coarse unpleasantness. But on flat surfaces, the EcoSport has enough power to get up and out of its own way, and you won't be flooring it to pass other drivers on the highway.

What I can't forgive, however, is the fuel economy. At its best, the 1.0-liter, front-wheel-drive EcoSport can't crack 30 mpg -- the EPA rates it at 27 mpg city and 29 mpg highway. Not only is that 29-mpg rating worse than every single one of the EcoSport's four-cylinder competitors, it's lower than the 30-mpg estimate for the larger, more powerful Ford Escape. During a week of mixed city and highway driving in Los Angeles, I only see about 26 mpg on average, which is pretty pitiful.

That said, the EcoSport's on-road manners are a pleasant surprise. Even with my Titanium tester's upgraded 17-inch wheels, the tiny Ford delivers a smooth, compliant ride. Small pavement imperfections are easily soaked up by the nicely tuned chassis, and the EcoSport's pothole suppression is probably the best in its class. Steering response is about average, and overall levels of feedback are pretty low, but none of that is unexpected in this size and price class. The dynamic doll of the group is still the Mazda CX-3, and you'll find more overall powertrain refinement in the Honda HR-V and Hyundai Kona, but I'd definitely rather drive an EcoSport over a Chevrolet Trax or Toyota C-HR.

Despite having a generally dumpy interior, I must say, the EcoSport's feature set is quite rich. This loaded Titanium model has automatic climate control, heated seats, a heated steering wheel, sunroof, Bluetooth, upgraded B&O Play audio and Ford's latest Sync 3 infotainment suite inside an 8-inch touchscreen.

Sync 3 works as well here as it does in any other Ford model, with a relatively simple menu structure and quick response to inputs. The voice controls work well, Apple CarPlay and Android Auto are standard, and upper trim levels have an onboard Wi-Fi hotspot. I even like the screen's housing in an upright flat screen on the top of the center stack. My only gripe is that Sync 3 could stand to have more visual appeal. With big, bold sans-serif fonts and limited colors, this thing sort of reads like a large-print greeting card. 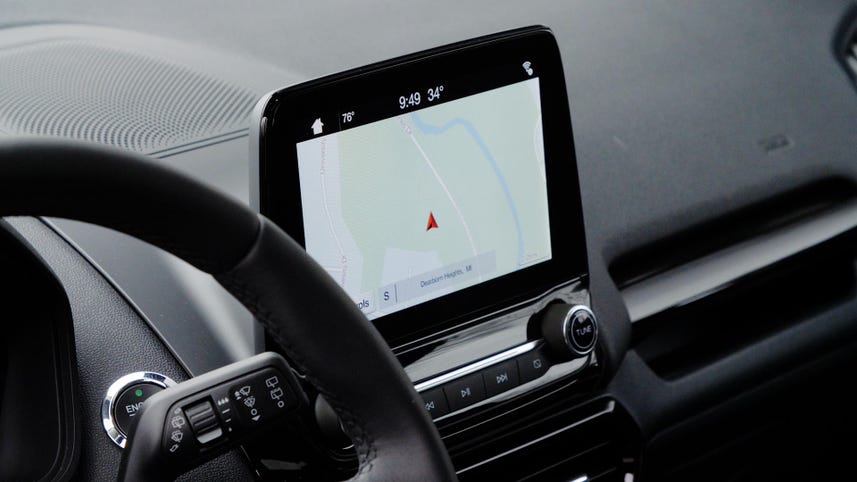 While the EcoSport starts at $19,995, the one you'll actually want costs a fair bit more. With all the aforementioned equipment, plus larger wheels and the $340 cold weather package, the front-wheel-drive EcoSport Titanium you see here stickers for $27,075, including $995 for destination. A fully loaded, front-drive Honda HR-V, meanwhile, costs $26,115 all-in. If you're thinking the EcoSport might be a value play, think again.

I really like the look of the EcoSport SES, with its blacked-out exterior trim and dark-finish wheels. The SES also comes standard with the 2.0-liter turbo engine and all-wheel drive, and the only optional add-on I'd want is the $500 cold weather package (yes, it's more on the SES than the Titanium). Then again, this build combination results in a $28,375 EcoSport, which is crazy.

Too little, too late?

The EcoSport isn't a bad car, but it's not the one I'd recommend. The Honda HR-V offers better quality, fuel economy and value. The Mazda CX-3 is a lot smaller inside, but its interior materials are superb, and it's way nicer to drive.

In the end, Ford's EcoSport delivers an experience that puts it at the middle of the subcompact pack, at best. Would I have it over a Chevy Trax, Jeep Renegade or Toyota C-HR? Yeah, but that's not exactly saying much. Alternatives from Honda, Hyundai and Mazda, not to mention oddball options like a Kia Soul or Subaru Crosstrek, offer better efficiency and nicer driving dynamics in a far more well-rounded package. With no real value benefit to speak of, not to mention obvious signs of age, the EcoSport is tough to recommend in this fiercely competitive class.