Lots of new games are being rolled out at E3 this year. Here's a look at the biggies.

E3 2018 is already in full swing, with boatloads of news from EA, Xbox, Bethesda, Square Enix, Ubisoft, Sony and Nintendo.

Here's a look at the most talked-about titles previewed at the show, some of which will be released this year. We'll continue updating our roundup as new games are announced.

The Witcher 3 is a legendary game and made CD Projekt Red one the most revered development teams in gaming. Cyberpunk 2077 is the Polish developer's next, er, projekt. It looks utterly incredible. There's no word yet on when it will be released, but a second trailer debuted at E3.

And yes, that mysterious necklace teased at the end of Gears of War 4 finds its way into the story. So where are the COGs headed next? "Back to where it all began," a place that it's safe to assume will feature Locusts, waist-high walls and plenty of chainsaw guns.

Plus, now they have iceboats!

In a nod to the monster success of Fortnite and PlayerUnknown's Battlegrounds, one of the biggest revels about EA's Battlefield 5 is that it will have a Battle Royale mode. That mode is supposed to be "completely reimagined" for the Battlefield universe.

The world has sorta moved on from the Halo series, but in a world where esports is perennially threatening to break into the mainstream, we're hoping 343 Industries' new Halo Infinite awakens the long-dormant competitive Halo scene.

"With Halo Infinite we will join Master Chief on his greatest adventure yet to save humanity," head of Xbox Phil Spencer said after the initial trailer was revealed during Microsoft's E3 2018 event. The game will be powered by the Slipspace Engine, a new graphics backbone for the game series. And the game will be coming to both Xbox One and Windows 10, via the Xbox Play Anywhere program.

"The team also heard feedback loud and clear on the amount of time spent playing as the Master Chief in Halo 5. In Halo Infinite, the game will focus on the Master Chief and continue his saga after the events of Halo 5," developer 343 Studios said in a blog post offering more details on the game.

The Division was a great game, but it always felt like a starting point for something more polished and broad. The Division 2 moves from a postapocalyptic New York to a plague-ridden Washington, DC.

Ever since the first teaser dropped, Fallout fans have been guessing that Fallout 76 would be the earliest game in the series' timeline, and would feature a less destroyed world than the desolate landscape the franchise has been known for.

Basically, the rumors are true: Fallout 76 is an online survival RPG akin to Rust or DayZ -- except it's not nearly as punishing. And Bethesda promises you'll be able to play solo, if you choose.

The Bethesda sequel no one really asked for, but then it was announced and everyone was sorta like, "Yeah, I could go for some of that."
Rage 2 is being developed by Avalanche, the team behind Just Cause and the last Mad Max game, which is good news because Rage 2 is basically Mad Max: Fury Road: The Video Game.

The creators of Titanfall are making a dark Star Wars game set after the fall of the Jedi Order.

Respawn Entertainment's Vince Zampella teased Star Wars Jedi: Fallen Order during Electronic Arts' E3 press conference Saturday, announcing that it "takes place during the dark times" in a period when "the Jedi are being hunted."

Ubisoft's next Assassin's Creed game is set in ancient Greece and is something of a sequel to Assassin's Creed Origins, which did a great job of revamping the series.
Odyssey will focus more heavily on the RPG elements introduced in Origins. This is a good thing.

Yes, there's another installment of FIFA coming, with a host of small graphical and gameplay improvements, as well as the addition of a Champions League license that EA has swiped from Konami and its rival soccer game PES. It will also feature the third and final chapter of Alex Hunter's story in The Journey.

Anthem marks a big departure for BioWare, a studio that made its name off the Knights of the Old Republic, Dragon Age and Mass Effect games. Instead of being a story-based single player RPG with occasional multiplayer elements, Anthem is more akin to Destiny or The Division.

All three games are set in large worlds full of combat opportunities, means for players to join up or fight each other and a keen focus on the accrual of loot above all else.

Do you like JRPGs with extremely convoluted plots? Boy, do we have the game for you!
Fans of the series, who've been waiting a long time for a proper Kingdom Hearts sequel, now can look forward to the officially announced Kingdom Hearts 3, which features characters from Frozen -- as well as a ton of other Disney properties.

Hideo Kojima set a high bar for weirdness with the twists and turns fans loved in the Metal Gear Solid series. Since departing the franchise, Kojima has been immersed in a new project: the PlayStation 4-exclusive Death Stranding.

The occasional interview and stunning trailer have offered some insight into how the game will play, but for now it just seems like a weird trip through horror, ecological concerns, parenting, invisible monsters and Norman Reedus.

Here's everything we know about Death Stranding, which still isn't all that much.

Spider-Man is one of those comic book properties that has a storied history of actually being pretty damn good as a video game. Spider-Man 2 was a stone-cold classic. Spider-Man 3 was extremely good as well.
This is something of a reboot. It's helmed by Insomniac Games, one of the most consistent development teams out there, and if the new trailer shown at E3 is an indication, the game looks amazing (Sorry, Xbox owners: This one is a PS4 exclusive.)

Here's our full preview of Spider-Man on PS4.

The Last of Us Part II

The Last of Us was a high water mark for video game storytelling.

Every single Smash Bros. character is headed to the Nintendo Switch with Super Smash Bros. Ultimate, coming to stores December 7, 2018. During its E3 2018 live stream, Nintendo not only revealed that Ultimate will bring together the series' entire roster to date, but that a multitude of new stages and old ones, along with character tweaks and updates, would be coming to the latest Smash Bros. entry.

Remedy Entertainment, the team behind classic sci-fi horror Alan Wakeand time-bending Quantum Break,showcased its latest game during Sony's E3 press conference. It's called Control and it's a "third-person supernatural action-adventure" that looks super slick, with a black-and-white aesthetic reminiscent of Alan Wake. This one won't be a PS4 exclusive.

Unveiled last October at Paris Games Week, Ghost of Tsushima is a big project from Sucker Punch Games, the studio behind the Infamous and Sly Cooper franchises. Imagine the Batman Arkham games, except with samurais during the Mongol invasion of Japan in the 1200s.

Read More
20 of 28 Capcom/Screenshot by CNET

Sony's E3 2018 press conference included a surprise reveal of two trailers for Resident Evil 2 Remake, along with gameplay footage and something even better: a confirmed release date. We'll see the game on January 25, 2019, on PS4, Xbox One and PC.

The rumors are true, battle royale fans: the hotly anticipated Fortnite is now available for the Nintendo Switch. Nintendo revealed Fortnite can be downloaded via the Nintendo eShop during its press conference. Go get it, Switch owners (yes, it's free).

The only issue is you can't play with your friends who play Fortnite on the PS4.

Shadow of the Tomb Raider

Daniel Chayer-Bisson, a senior game director at Eidos Montreal, promised greater depth in combat and underwater exploration. Lara will become one with the jungle, he says. This is all likely to mean Lara will have more inventive ways to brutally kill unsuspecting enemies.

The game will be playable on the PlayStation 4, Xbox One and PC.

Beyond Good and Evil 2

We've been waiting over 15 years for Beyond Good and Evil 2, the long-promised sequel to the fan-favorite tale of a civilization under occupation and the photojournalist who saves it. (Plus, a really awesome badass pig dude.)

The surprise reveal at E3: Former protagonist Jade is the villain, not the hero! 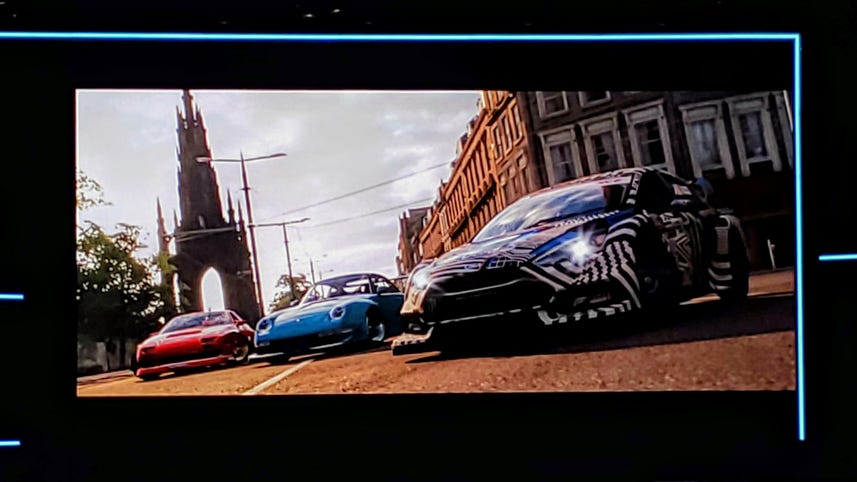 The next installment of Microsoft's graphically impressive arcade racer is set in Britain. New to the series: Dynamic seasons, which will impact racing conditions. The game will be available for Xbox One and PC and has been optimized for the Xbox One X with 4K output.

Yes, Super Mario Party is coming to the Switch, and it looks like a lot of fun. The wide assortment of mini games will take advantage of the Switch's Wii-like motion controls with up to four players getting in on the action (if you have two sets of controllers). The trailer even shows players combining two Switch consoles as part of the gameplay, which looks interesting.

You can view the E3 trailer for Nintendo Super Mario Party Switch here.

There are big sequels for Fallout, Doom, Quake and Elder Scrolls coming to PC, Xbox and PS4 in next few months -- and years -- but the game that caught a lot of people's attention was Elder Scrolls Blades, the upcoming free-to-play iOS and Android RPG from Bethesda.

Game Director Todd Howard called it a "massive first-person RPG with console-quality graphics" during its on-stage reveal at E3.

The game will be free and will arrive this fall on iOS and Android devices, with more platforms -- including VR modes -- promised in the future.

Read More
27 of 28 From Software/Activision

Sekiro: Shadows Die Twice is the latest game by From Software, the creators of Dark Souls and Bloodborne. It was long thought "Shadows Die Twice" was a codename for a possible Bloodborne sequel, but it turns out it's a brand-new game that will be published by Activision.

28 of 28 Screenshot by Lori Grunin/CNET

The next installment of the Metro series from 4A Games promises a more freeform survival experience in a more expansive post-nuclear-war Russia. Unlike Metro 2033 and Last Light, the action takes place mostly above ground instead of underneath it. It will be available for PlayStation 4, Xbox One and PC.

Read the full preview from our sister site, GameSpot, here.

93 Photos
Movies Coming in 2022 From Marvel, Netflix, DC and More