When Nissan killed the Juke last year, I'll admit it left a little hole in my heart. The ugly-cute crossover SUV was fun to drive and appealed to my emotions like few crossovers do. Now for 2018, Nissan has launched the Kicks. Yes, in a marketing move sure to upset my grade-school grammar teacher, the Kicks' name is oddly plural (not unlike the Armada and Maxima before it). And while the Kicks is not a flat-out replacement for my favorite Nissan crossover, it's certainly reaching for the same young and young-at-heart audience.

Underpowered engine. All-wheel drive is not on the menu.

The Nissan Kicks is a good combination of utility and efficiency, wrapped in a funky little package.
Watch this: 2018 Nissan Kicks: A quirky new crossover has some smooth moves
04:49 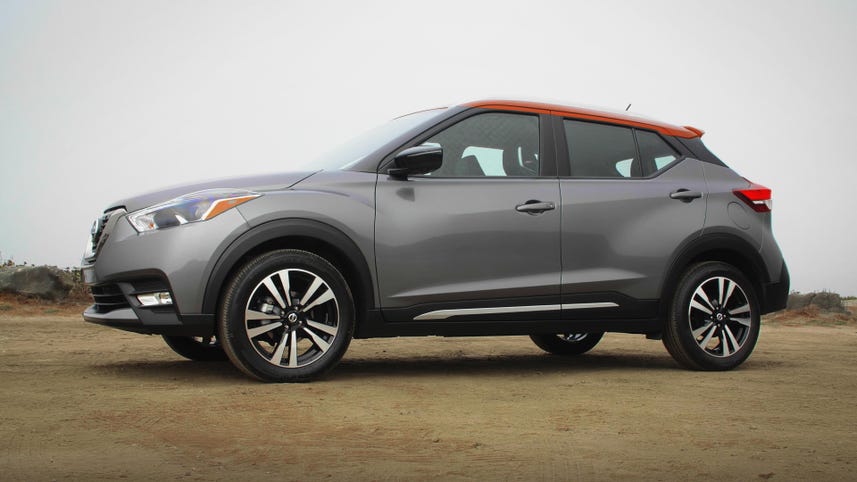 The Kicks, available in S, SV and SR trims, is technically classified as a hatchback by the EPA, but Nissan calls it an entry-level crossover SUV. It's a bit larger than the Versa Note, Nissan's more traditional, economy-minded hatchback, but is shorter in stature than the larger Rogue Sport. Whether you call it a crossover or a hatch, it starts at just a smidge over $18,000, making it one of the least-expensive vehicles out there.

We got our first glimpse of the Kicks way back in 2014 as a concept at the Sao Paulo Motor Show. While its design isn't as crazy-funky as the Juke, you can certainly see the latter's influence. A short wheelbase is capped by a sloping roof, heading into taillights that can only be described as asymmetrical. The Kicks is offered in seven colors, including groovy two-tone combinations, and you can even color-customize parts like door handles and mirror caps in the Nissan Color Studio.

As with most inexpensive crossovers, the Kicks' power is on the low side. A 1.6-liter naturally aspirated four-cylinder engine knocks out a mere 125 horsepower and 115 pound-feet of torque. The good news is the Kicks competes in the lightweight category. In base S trim, it tips the scales at a mere 2,672 pounds, giving it a reasonable power-to-weight ratio. It's no tire slayer, and steep hills require momentum and some planning, but this Nissan is not nearly as slow as I thought it was going to be.

As with most contemporary Nissans, power gets to the pavement through a continuously variable transmission. Upon full throttle, the transmission throws up a fair amount of noise, but it acts vaguely like a standard automatic, with simulated upshifts bringing the engine back to lower revs when just cruising along. If you're hoping for all-wheel drive, you're out of luck -- despite its could-be crossover classification, the Kicks is only available with front-wheel drive.

A small, flat-bottomed steering wheel has nice weight to its action, with a relatively quick ratio that allows for crisp turn-in. That said, my tester exhibits a weird quirk where the wheel seems to have a hard time returning to center -- the usual amount of back-to-center assist doesn't seem to be there. The Kicks is nowhere near as fun to drive as the late, more-powerful Juke or the more-expensive Mazda CX-3, but it provides a competent driving experience on back roads, in line with other vehicles at this price.

On the highway, there is more wind noise than road noise, but it's mitigated by a bumpin' optional Bose stereo with eight speakers, including two in the driver's headrest.

The Kicks gets an EPA-estimated fuel economy rating of 31 miles per gallon in the city, 36 mpg on the highway and 33 mpg combined. During my week with it I got a bit less than that combined rating thanks to my heavy right foot, netting 31 mpg overall. However, those EPA numbers pretty much kick butt compared to the competition. The Mazda CX-3, the best of the rest, returns only 29 mpg in the city, 34 on the highway and 31 combined.

Cabin technology is in surprisingly high supply, with three standard USB ports, and both Apple CarPlay and Android Auto in SV and SR trims. The Nissan Connect infotainment system runs on a 7-inch touchscreen that's standard across the board. The infotainment layout is a bit more streamlined, with a customizable home screen and menus that are easier to navigate. With smartphone mirroring, the system is much more user-friendly than in other Nissans I've driven. Let's hope the trend continues.

Driver's aids are a bit on the light side, although automatic emergency braking is standard on all Kicks (there's that weird plural again). Blind-spot monitoring and rear cross-traffic alert come in on the mid-trim SV, while the top-of-the-line SR gets a 360-degree camera. Adaptive cruise control and lane keeping assist are not available on any model, giving an edge to competitors like the Toyota C-HR.

As much as I like the outside of Nissan's runabout, there are a few interior features that feel really cheap. There is the expected amount of hard surfaces, which again, is forgivable at this low price point, but the door panel features an awkwardly proportioned design, resulting in a huge expanse of blank hard plastic. I understand that not everything can be soft and supple, but this just calls attention to the use of less expensive materials. At least there is some nice contrast stitching on the seats and dash. 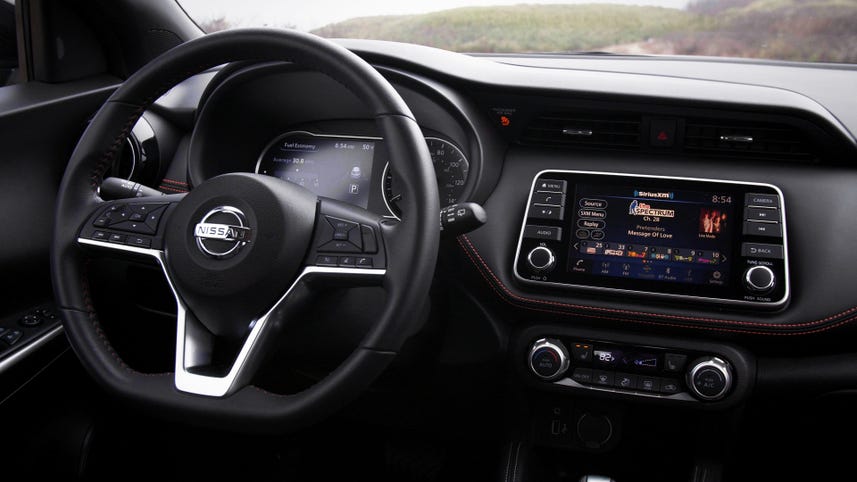 The good news is Nissan makes its super-comfy Zero Gravity Seats standard. I'm not sure what kind of voodoo magic is in these seats, but apart from luxury vehicles, I think these are the best hindquarter cradlers on the market.

Cargo space in the Kicks is solidly mid-class. You'll find 25.3 cubic feet behind the rear seats, a tad better than the Honda HR-V and Kia Soul -- enough to carry three huge bags of video gear. The available 53.1 cubes with the rear seats folded is less than the Soul and HR-V, but much better than the Toyota C-HR and Mazda CX-3. In terms of stashing items in the front, I would welcome a center storage box. Once my phone, sunglasses and soda are stored, there isn't any place for a wallet or house keys.

For my money I'd start with the SR trim, for $20,590, not only to get Apple CarPlay and Android Auto, but this is the only way to get the Premium Package with the Bose stereo and heated seats, an additional $1,000 well spent. I'd also splurge and spend $150 to get a two-toned paint job. My grand total for my dream Kicks is $22,785, including $1,045 for destination. The test car you see here has an as-tested price of $22,980 thanks to the addition of... floor mats.

Starting at $18,290, it's tough to find a subcompact crossover offered as inexpensively as the Nissan Kicks. It's less expensive than the Hyundai Kona, Ford EcoSport and Mitsubishi Eclipse Cross. In fact, only the Kia Soul, at a starting price of $16,490, bests the Kicks in price. Sure, most folks will spring for Apple CarPlay, Android Auto and blind spot monitoring, putting the price closer to $20,000, but the new Nissan is chock-full of value. It offers excellent gas mileage, a fun and funky design and good utility.