The new SVJ is the current world's fastest car around the benchmark Nurburgring, but it's so much more than a number.

If you're in a Lamborghini and you hear your tires squealing, chances are the next thing you'll hear is the sound of some corner of the car impacting a wall or another hard object. These cars are, historically, not the sorts of machines to reward over-driving. So, when I was handed the keys to the world's fastest production car around the Nurburgring, the Lamborghini Aventador SVJ, I expected a day full of forced restraint and pucker-inducing moments.

Shockingly, I would quickly learn, the SVJ not only enables a driver to push past its performance envelope, it seems to welcome playing around out there. Lamborghini's 759-horsepower supercar is so comfortable on the limit that within a few laps of the challenging Estoril circuit in Portugal I had all four tires squealing and squirming as I found, went past, and then came back to their limits of adhesion.

I'd need all the tricks the new Aventador has to offer to go quickly in these conditions. Thankfully, it has quite a few.

Watch this: Lamborghini's Aventador SVJ is more than a 'Ring monster
05:37 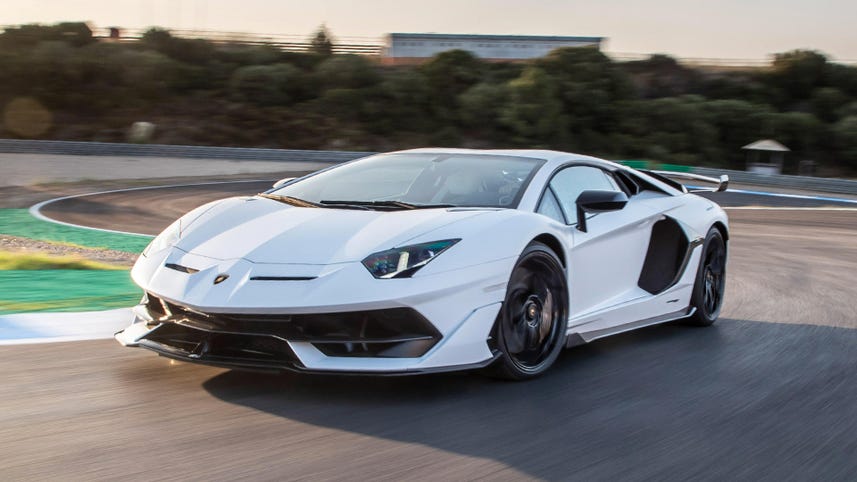 If you followed along to Italy last year for my first drive of the Lamborghini Huracan Performante you know that a lot of relatively minor tweaks made for a radical transformation. The Huracan went from a pulse-quickening road car to compelling track-day toy.

Much of that same thinking was applied to make the new Aventador SVJ a better car than its predecessor, the Aventador S -- which itself was a surprisingly big step up over the plain-Jane Aventador.

It's the new SVJ that recently grabbed the production car lap record at the Nurburgring, taking it away from the Porsche 911 GT2 RS with a time of six minutes and 44 seconds. That's about seven seconds faster than the Performante, which itself held the record for a little while, and 15 seconds lower than the old Aventador SV.

What's new? Well, we'll start with the tires, because while most attention will be focused on the new hardware, it's the sticky bits that make the most difference. The SVJ rolls on 255/30 ZR20 front Pirelli P Zero Trofeo tires and absolutely massive 355/25 ZR21 rears, all four of which were specifically developed for the car. Those hitting the track, however, can opt for Trofeo R tires, offering kevlar internals for greater sidewall strength. However, those will only work in a very specific temperature range, making them unsuitable for the street.

All that combines with the car's existing all-wheel drive and stability control systems under an umbrella Lamborghini calls LDVA 2.0, Lamborghini Active Vehicle Dynamics. This is the central "brain" that enables all those disparate systems to act in harmony, ultimately creating a car that is surprisingly confidence-inspiring. It even ties the rear-steering system in to the stability control, so if the back of the car starts to slide, it can automatically counter the skid for you. It's just a little like magic.

Estoril is a circuit that's such a staple on the calendar of various international motorsports series that, if you've ever played a racing game, you've almost certainly turned a virtual lap here. I certainly have, many of them, but there's nothing like doing it for real with the better part of 760 horses underneath your right foot.

And on this day things would be even more challenging than usual. Why? This great circuit of Estoril has recently been repaved, and by "recently" I mean just two weeks ago. Fresh asphalt is not only incredibly smooth but it also has a tendency to ooze all sorts of slippery compounds.

The lack of grip from the new surface was apparent almost immediately, with the tires complaining as soon as I got up to speed. The car was definitely unhappy -- but that certainly didn't mean that I was. Anyone who's ever raced in low-grip situations will tell you that it's a huge challenge. However, it's also a great time to learn the core dynamics of a car. Lower the limits and you'll hit them much more quickly.

It's for that reason I was pleased with the slippery track. Turning in aggressively caused the front end to lose grip every time, a tendency toward understeer that will keep novice drivers from spiraling into various hedges.

However, show a little more intent by continuing to turn the wheel while applying throttle, and the nose tucks in willingly, even if the rear of the car has already run out of grip. This is when you can get yourself into an oversteer situation, where the tail begins to slide, but modulating between the two is a (relatively) simple matter of managing throttle and steering.

In other words, the SVJ is positively playful in limited grip situations. This enabled me to quickly start pushing to the point where all four tires were squealing. That's a pretty thrilling thing in a car this quick, where on the front straight I was just knocking on the door of 280 kilometers per hour -- over 170 mph.

Lamborghini Aventador SVJ will make you green with envy

But there's one fly in this large tub of sweet-smelling ointment, and it's the transmission. The six-speed, single-clutch unit that's been a hallmark of this car since the beginning stands out as the single most track-unfriendly aspect of the package. Its brutal shifts are a big part of the character of the car, but they unsettle the whole thing so much mid-corner that, on some corners, you're forced to either upshift early and lose time or spend an uncomfortable amount of time flirting with the 8,500 RPM limiter.

And on the street? Sadly, I didn't get any time there, but again Lamborghini said the default suspension modes aren't any more punishing than they were before. What has taken a significant downgrade, however is the rearward visibility. The central support in the wing and the sizeable ALA intake do a good job of killing what was a pretty restricted view to begin with.

Wherever you drive the SVJ, there's one thing you will always appreciate, and that's the sound. This is surely one of the last hurrahs for unmolested V12s and boy does it sound sweet. Lamborghini tuned the exhaust to highlight the kind of high-frequency notes a turbocharger typically mutes. The effect will make a chill run down your spine. Driven in anger, the SVJ is a special thing to hear.

So the SVJ is still fundamentally an Aventador, a car that sings an unholy song and has a transmission that is likewise of the devil. However, like the Performante before, it is a car transformed by a small number of seemingly minor changes. The additional dynamics enabled by the four-wheel steering, the extra grip from the tires and those next-gen aerodynamics create a machine that is still brutally fast and yet somehow playful.

A friendly giant? Maybe not quite, but it certainly looks downright evil in its luscious green Verde Alceo color, and you'll need plenty of green to get into one. A starting price of $518,000 means this will be a toy for the few, and with only 900 being built, exclusivity is guaranteed.