The Kona Electric takes everything we like about the regular Kona and adds some electrons.

The 2019 Hyundai Kona Electric is easy to like. It offers a sense of conventionality that should ease the transition from gas to plug -- and rightfully so, because it's based on an already excellent subcompact crossover. Doing something new can feel scary, but if there's an element of familiarity to it, it's much easier to acclimate to change.

The 2019 Hyundai Kona Electric is efficient, fun and properly teched out.

Familiarity breeds comfort, so the Kona Electric is a good way to bring new EV buyers into the fold.

Future-forward design, but rooted in reality

At a glance, the Kona Electric looks pretty close to any other Hyundai Kona on the road -- depending on your opinion of the Kona's polarizing looks, that could be good or bad, but I like it. All the familiar elements are there, from the dark cladding on the lower body to the trademark squinting running lights up front. Yet, there are a few key differences.

Losing the internal combustion engine means the Kona Electric doesn't need a grille, so it's been ditched in favor of a dimpled front end. A panel on the driver's side of the "grille" hides the CCS Combo charging port, and there's a small battery-level gauge right there to let me know the battery's level at a quick glance.

The Kona Electric's battery doesn't eat into cargo space, which is great, because there wasn't much to begin with. With about 19 cubic feet available behind the second row, the Kona is already second to last in the subcompact crossover segment, out-stuffing only the Mazda CX-3. Don't expect a frunk, though -- the space formerly devoted to an internal combustion engine is now dedicated to EV hardware.

Thankfully, the ovoid shape of the Kona means there's ample room in the second row to throw even more stuff. Humans won't be bent out of shape back there, either -- at 6 feet tall, I still have a few inches of space before my head touches the headliner, and legroom is ample for a subcompact SUV. Visibility is sufficient, with pillars that aren't thick enough to make blind spots worse yet aren't thin enough to warrant glowing commendation. You won't have a problem seeing out of it.

Like the exterior, the interior has a few slight adjustments owing to the EV powertrain's unique packaging. Since there's no need for a conventional transmission tunnel, Hyundai redesigned the center console to make room for a large cubby just above the floor. Yet, above that, there's still enough space for a second deep cubby that contains my tester's optional wireless device charger. The usual shift lever has been kicked to the curb in favor of a push-button setup that works just fine, but even after a week of heavy use I'm still having trouble committing it to muscle memory, occasionally pushing for Reverse when I want Drive.

Nevertheless, the interior remains nice and spacious in every seat, with enough places to store just about anything in my pockets. My only major complaint is that, when specified with the white-and-blue interior motif, all that brightness lends a feeling of cheapness to the materials that a black interior would otherwise mask.

Charging down the road

Even though the Kona Electric isn't billed as a fun electric vehicle in the traditional sense, I think it's a hoot. A single electric motor on the front axle confers 201 horsepower and 291 pound-feet of torque -- an impressive 26 hp and 96 lb-ft more than the zippy 1.6-liter, turbocharged gas Kona -- even though the EV is still slower to 60 by almost a full second. The single-speed automatic transmission means there's never any gear changes to slow things down; pressing my foot to the firewall is always met with ample torque delivery, shoving the show forward.

While the friction brakes do a plenty fine job of stopping the Kona Electric, I barely use them. Instead, I rely on the car's multi-stage regenerative braking system, which uses resistance from a generator to slow the vehicle and add a bit of charge to the battery. The paddles behind the wheel allow me to ramp the regen braking's strength up or down, and holding the left paddle during deceleration allows for proper one-pedal driving, bringing the car to a complete stop. There's also a counter in the gauge cluster that tells you how much charge you added back to the battery, usually averaging between 0.2 and 0.4 miles per braking event.

The Kona Electric's 64-kilowatt-hour battery is good for an EPA-estimated range of 258 miles, or about 4 miles per kilowatt-hour. However, in Michigan's 40-degree weather, I never saw the topped-off range displaying higher than 228 miles, and the number dropped lower when I actually used the heat -- for the most part, I survived with seat and steering wheel heat, because even something as slight as adjusting the HVAC fan speed a single tick can drop estimated range by 5 or 10 miles. Driving the Kona Electric as I would any other car, I'm impressed with the economy, which translates to between 3.8 and 4.6 miles per kilowatt-hour, right on track with EPA estimates. Of course, everything from weather to driving style can have an effect on range, so your mileage will vary, not may.

Living a few blocks from a 50-kW DC Fast Charger is a huge benefit, giving me about 80 percent battery in the time it takes to catch up on email and grab a cup of coffee. Using more traditional Level 2 chargers slows things down, requiring about nine hours to go from E to F, but if you have a home charger, it's as simple as leaving it plugged in overnight.

While the Kona Electric might handle and accelerate well, the driving experience isn't perfect. The ride quality feels a bit worse than the gas Kona, riding roughshod over bumps and dips in a way that the gas Kona never did. It appears that Hyundai didn't make any NVH adjustments to the Kona Electric, despite losing the gas engine, so road and wind noise is more prevalent than on the gas Kona. The car's Nexen N'Priz AH8 215/55R17 all-season tires grip well but have a little trouble managing wheelspin, although chilly temps are also partially to blame in this instance.

The Kona Electric carries the same infotainment tech as the gas-powered Kona, which is very much a good thing. My Ultimate-trim tester has all the bells and whistles, starting with an 8-inch touchscreen that packs embedded navigation, Apple CarPlay, Android Auto and satellite radio. The system, which also appears in Kia vehicles as Uvo, is a little on the old side, but it's laid out in a straightforward manner and it packs all the capabilities a driver needs these days, so it remains one of my favorites. Lesser trims make do with 7-inch screens, but the system is still excellent even with the smaller wrapper.

Other creature comforts abound, as well. Ventilated seats make it easier to cool down the driver without relying on an entire HVAC system, which can further whittle away at the car's range. There's also a head-up display, but it requires a retractable display that's situated too low to the dashboard for taller drivers, so I keep it disabled for most of my time with the car. 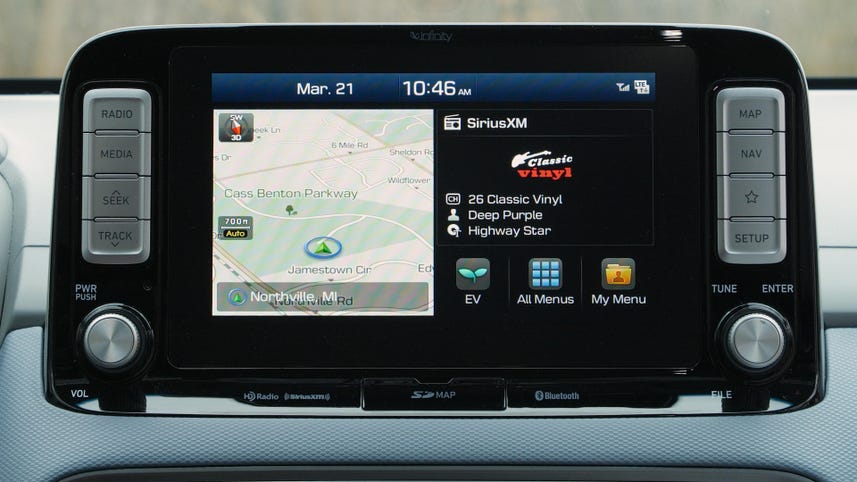 Checking the tech in the 2019 Hyundai Kona Electric
3:28
Watch Now

On the safety front, the Kona Electric is about as loaded as can be. Even the base trim gets goodies like automatic emergency braking, lane-keep assist and blind spot monitoring, while my Ultimate-trim variant adds benefits like pedestrian detection and adaptive cruise control with stop-and-go functionality. Like the gas Kona, I find the lane-keep assist to be a little heavy-handed on the road, but otherwise, the system is a welcome addition on long highway slogs.

There are three trims of Kona Electric available, and they don't have any major options packages, so this will be straightforward. I'll keep my tester's slick ceramic blue paint job, but as I mentioned earlier, I'd stick with a black interior, since it feels less cheap than the white-and-light-blue interior of my tester. My Ultimate-trim tester costs a lofty $45,695 including destination, but I think the sweet spot is the $42,195 midlevel Limited trim. It loses the HUD and ventilated seats, but it still has the wireless device charger, LED headlights and leather seats. The $37,495 SEL base trim is just a bit too basic for my tastes.

While the Kona Electric might seem expensive in a bubble, it's actually a bit ahead of the competition, which struggles to offer the same experience for the same price. The Nissan Leaf Plus starts at $37,445 and tops out at $43,445. While ProPilot Assist is an excellent driver's aid, the base trim's 226-mile range is the lineup's best, dropping to 215 miles when higher trims are selected.

The Chevy Bolt EV's range is better, but its options are packaged in a stingier manner, with many safety systems tucked away under higher trims and added-cost options packages. In fact, the Kona Electric's best competitor is its kissin' cousin, the Kia Niro EV, which packs 239 miles of range using the same powertrain as the Kona Electric and isn't as… polarizing in the looks department.

I truly believe that cars like the Hyundai Kona Electric are pivotal in helping the average Joes and Janes of the world into electric vehicles. It takes everything I like about the gas-powered Kona and gives it a dose of futurism that doesn't dominate the conversation.