Designed to blend in, the Kia Niro doesn't turn heads. However, the dull exterior hides quite good fuel economy, performance and technology for safety and entertainment.

The Kia Niro hybrid didn't make a very good first impression when it arrived at Roadshow HQ. That's partially because our tester was a base-model Niro FE with the very base level of amenities, technologies and trim available. That it sported generic silver paint with gray trim and plastic wheel covers didn't help keep this car from looking like a throwback to the cheap cars that Kia built in the early 2000s.

The 2017 Kia Niro is good for up to 50 mpg combined. There's plenty of room for cargo in the spacious cabin and it has a solid suite of optional driver aid tech. Even without options, the UVO dashboard tech is fully-featured and boasts Android Auto and Apple CarPlay.

Trim levels with access to better amenities and safety tech get lower fuel economy than the base model. The USB port doesn't supply enough electricity to charge a phone while using Android Auto. The hybrid system experienced an odd hesitation in stop-and-go traffic.

Don't judge this book by its dull cover; the 2017 Kia Niro quietly boasts very respectable hybrid performance. Stick to the midtier trim levels for the best blend of economy, technology and price.

But then I spent a week with the Niro and learned that maybe I shouldn't have judged this book by its cover. Get to know the Niro and it reveals itself as a thrifty, capable and easy-to-live-with car. The fuel economy is actually quite good;  the spacious cabin makes short work of Ikea and Costco-sized loads; and the tech, even at the base FE level, is surprisingly well-sorted.

Power for the e-motor is stored in a 1.56 kWh (6.4Ah) lithium-ion polymer battery. For now, the Niro is not a plug-in hybrid, so it recharges its battery from a combination of regenerative braking and surplus energy generated by the gasoline engine.

Also like the Ioniq, the Niro makes use of a six-speed dual clutch gearbox to send power to the front wheels, rather than the continuously variable transmission that most hybrids use. The automaker claims this novel configuration yields benefits for drivability and economy. However, I think it's also to blame for some awkward hesitation I experienced in stop-and-go traffic; my theory being that the gas-electric transition of the engine doesn't always mesh with the clutch-actuated shifts when creeping at very low speeds. I experienced a similar phenomenon when testing the Ioniq.

Watch this: Thrifty but plain: 5 things to know about the Kia Niro
01:10 Thrifty but plain: 5 things to know about the Kia Niro
1:10
Watch Now

Aside from the occasional stutter, the Niro's hybrid engines and quick gearbox made smooth and mostly responsive work of city speed driving. The default drive mode is an Eco program, so it quickly upshifts when approaching highway speed to preserve fuel, which makes it feel a bit less lively on the interstate.

Near the end of my testing, I found a setting tucked in the instrument cluster's menu that allowed me to select a Sport program that really wakes the hybrid system up. In this mode, the throttle becomes significantly more responsive and the Niro starts to feel downright quick when accelerating from a stop. However, using this mode cost me a few miles per gallon.

Speaking of mpg, the EPA estimates the Kia Niro FE at 52 city, 49 highway and 50 combined mpg. That 50 mpg magic number puts the Niro just short of the 56 mpg Toyota Prius Eco and the 58 mpg Hyundai Ioniq Blue. It's still an impressive showing considering the Niro is basically a small SUV with a less uber-aerodynamic design than these two hatchbacks. In fact, the Niro was penned to look as un-hybrid-like as possible.

For the slight eco trade-off, the Niro does have the advantage of more overall cargo capacity -- it's downright cavernous with the rear seats folded -- and a higher, more commanding ride height and view of the road. During my week of testing, which included lots of highway miles loaded up with cargo while helping a friend move, I averaged 48.1 mpg.

The aforementioned numbers are, I should note, specific to the FE, since it's lighter than the more fully equipped trim levels. Step up to the EX model and the economy drops to 49 mpg combined while the fully loaded (and, honestly, much better-looking) Touring model drops to just 43 combined mpg. So, I can sort of see why Kia sent us the stripped-down model. Still, it's a bit annoying to know that potential buyers who want a bit more creature comfort will not only pay more up front, but also more in fuel over the life of the vehicle.

Though the Niro just barely loses to the Prius at the pump, its UVO cabin tech blows the Toyota's offerings out of the water.

Even at the base level, the Niro FE hybrid comes packing a 7-inch UVO touchscreen infotainment system with a thoroughly modern list of digital media options and sources. There's satellite radio (subscription required), USB and iPod connectivity, Bluetooth for hands-free calling and audio streaming and more. 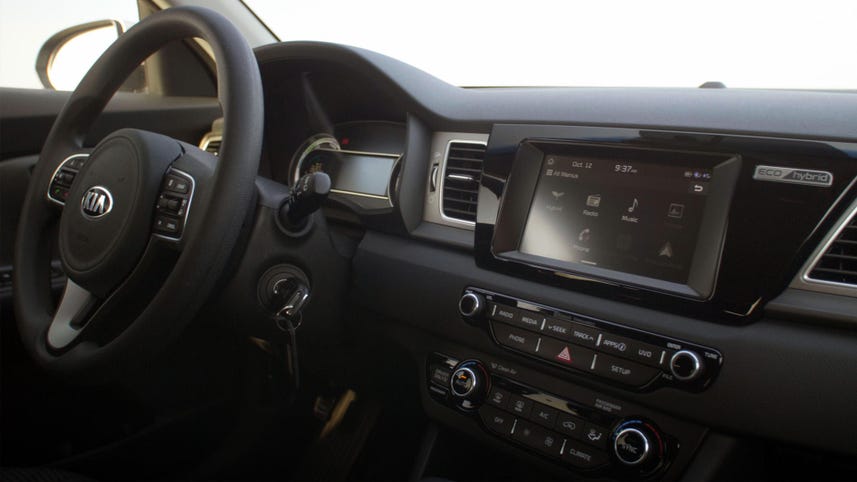 If that's not enough, the base system also features standard Android Auto and Apple CarPlay connectivity, so you can bring your Google or Apple Maps on the road along with dozens of audio streaming apps for music, news, podcasts, audiobooks and other digital options. Just plug your compatible smartphone into the USB port and follow the onscreen prompts.

That USB port is the source of one minor tech annoyance for me. When connected to my Google Pixel XL, it didn't provide enough power to the phone to positively charge the device while connected and using navigation. So, I'd end every trip with a lower battery level than I'd started with. I tested with a Nexus 6P and got the same results. This has been a known thing with Hyundai/Kia receivers among Android Auto enthusiasts for some time now, so it's disappointing to see that it's still an issue.

Though not available on the base FE model, there is an optional navigation system available to buyers of the top Touring trim level using the same UVO mapping and voice command software we've seen throughout the rest of Kia's line.

The most advanced driver safety system on our base FE model was the standard rear camera and the six advanced airbags. Like the dashboard tech, this is about as basic as it comes.

All said, the list of available features is well-sorted and satisfactory. However, the tiered organization of Kia's options list, requiring a step up to heavier trim levels and a step down to lower fuel economy, seems to force drivers to choose whether to be as thrifty as possible or as safe as possible.

The 2017 Kia Niro FE starts at $22,890 (before an $895 destination charge) which is actually a surprisingly affordable sticker for a 50-mpg compact SUV with a solid suite of dashboard technology.

The sweet spot of the lineup includes the LX and EX trims, gaining a healthy dose of amenities and creature comforts and unlocking the optional driver aid suites while only dropping down to 49 combined mpg. My personal recommendation is EX with Advanced Technology Package with its MSRP of $29,290 including options and destination charges.

And for goodness sake, no matter what trim level you pick, make sure to get it in any color but that dull "Rental Car Silver" that our tester wore.

The Toyota Prius and the Hyundai Ioniq are the Niro's main competitors, both boasting much better fuel economy, but a bit less cargo space. Ford's C-Max Hybrid model also competes in this space, nearly matching the Kia on cargo capacity, price and fuel economy.