With a class-leading 58 mpg, the Hyundai Ioniq Hybrid looks like a Prius killer. We hit the road to find out if the rest of the car lives up to the mpgs.

All hail the new hybrid king. Meet the new 2017 Hyundai Ioniq Hybrid: the car that took on Toyota for the title of most fuel efficient car in America without a plug… and won. At a maximum combined estimate of 58 mpg, the Ioniq has effectively out-Priused the previous king of the hybrids.

At a class-leading 58 mpg combined (55 mpg for SEL and Limited models), the Hyundai Ioniq is currently the most fuel-efficient car without a plug. The Blue Link tech is easy to use, boasts standard Android Auto and Apple CarPlay, and integrates with a range of smart home and mobile devices. Driver aid technology is on par with the competition.

The dual-clutch transmission feels hesitant in stop-and-go traffic. The smartphone USB port doesn't provide enough juice to both charge a device and use Android Auto or Apple CarPlay.

The 2017 Hyundai Ioniq Hybrid may not be a Prius-killer -- even with its excellent mpg -- but it's certainly a solid competitor worthy of consideration for eco-minded and budget-conscious buyers.

But those are just numbers and test cycles. I wanted to know how the rest of the Ioniq measured up, so I hit the road recently in a shiny, new Limited model to find out.

I should note that the Ioniq Hybrid is not alone. It's actually one-third of a trio of green vehicles that all use this hatchback chassis, but have different electrified power trains. In addition, there's the Ioniq Electric and a Plug-in Hybrid. I've included my driving impressions for those models, as well, taken from a Hyundai driving event earlier this year.

Hitting the road in all three 2017 Hyundai Ioniq models

Interestingly, the Ioniq's hybrid power train uses a six-speed dual-clutch transmission (DCT) rather than the more-conventional continuously variable setup. This makes the hybrid feel more like a regular gasoline car on the road.

Though there is a neat sport mode that livens up the throttle response, there are no paddle shifters, so you're at the mercy of the computer to choose the DCT's ratios. Also, the DCT feels awkward at low speeds. It's fine when you're wailing on it on a country road or the interstate, but when driven like a hybrid, it's not as smooth or immediate as Toyota's CVT. In stop-and-go traffic, the Hyundai's gearbox feels very hesitant to engage, which created a noticeable lag between throttle input and actual motivation. This is odd, because stop-and-go is typically where electrified cars excel and feel best.

The Blue trim-level base sips fuel at a seriously impressive 58 combined mpg -- that's 57 mpg in the city and 59 mpg on the highway. Hyundai claims that weight savings, improved efficiency of the gasoline engine, and a slippery low-drag body design help it to achieve this Prius-hunting fuel economy. The Blue is the lightweight of the lineup, but the SEL and Limited trim levels feature more equipment and, as a result, more mass and a slightly lower 55 combined mpg estimate.

2017 Hyundai Ioniq Hybrid: 5 things you should know about this 'Prius killer'
1:38
Watch Now

On the road, I averaged around 52 mpg, with a week's best of 54.1 mpg. That is in line with the EPA's numbers and is still impressive, but I should point out that I averaged 60 real-world mpg on an identical driving route with very similar traffic and driving techniques in the Prius when I tested it last year. What does that tell you? Well, not much more than the old adage that your mileage may vary, but I've got a hunch that the Prius may be a tad more efficient in the real world. I'll be keeping an eye on other real-world reports as the Ioniq makes its way into more driveways.

The Hybrid features a multilink rear suspension and MacPherson front setup that makes for decent handling. The steering reminds me of the Elantra -- that's not a huge surprise and no bad thing. I'm a fan of the Hyundai's responsive and nonfatiguing handling.

All Ioniq models feature the same Blue Link infotainment system in the dashboard with standard Android Auto and Apple CarPlay connectivity. The display is either a 7- or 8-inch touchscreen, depending on whether the optional onboard navigation has been spec'ed.

Overall, the Blue Link software is quite good. It's simple and easy to understand, features smooth minimal animations and crisp graphics, and generally stays out of its own way. If I have one complaint, it's that the USB port doesn't put out enough amperage to charge my phone when using Android Auto. I ended every trip with my phone's battery 10 to 20 percent lower than I'd started at. I know, that's like the most millennial complaint ever.

This generation of the Blue Link hardware can be had with an always-on data connection subscription that allows the status of the vehicle to be remotely monitored. Hyundai also uses this connection for in-car Wi-Fi hotspot and for the bi-direction integration with Amazon Alexa and, soon, Google Home systems. Owners can ask Alexa if they remembered to lock their doors when leaving the car or tell the service to turn off their web-connected appliances and lights while on the road. And if you don't have Alexa, you can always use Hyundai's apps for Android, Android Wear, iOS devices or Apple Watch remotely control and monitor the Ioniq.

The Ioniq is also available with a modest range of standard and optional driver aid technologies. Base models include a basic standard rear camera, but the SEL and Limited models gain standard blind-spot monitoring, rear cross-traffic alerts and optional packages that add automatic emergency braking, adaptive cruise control and lane-departure warning. However, the Ioniq lacks available semi-autonomous parking-assist tech, which you can get on the Prius.

Other tech treats at the Limited with Ultimate Package trim level include a Qi wireless smartphone charging pad on the center console -- which is nice to have but will probably go unused, since the USB connection is required for Android Auto or Apple CarPlay -- and an 8-speaker Infinity audio system.

Watch this: A close look at the BlueLink tech in Hyundai's new Ioniq Hybrid
02:10 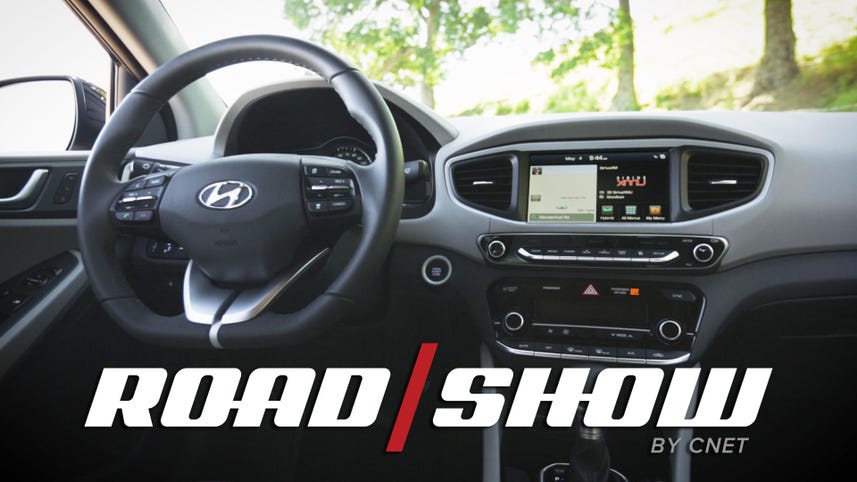 Joining the lineup in the fourth quarter of 2017 will be the Ioniq Plug-In Hybrid. The Plug-in takes the 1.6-liter gasoline engine and gearbox, but steps up to a significantly larger 8.9-kWh battery pack and a slightly more powerful 44.5-kW (60-horsepower) electric motor. The PHEV also gains a J1772 port that, when connected to a level 2 charger, allows the battery pack to be charged in just 2.25 hours. Hyundai claims that the bigger battery gives the PHEV an estimated full-electric range of 27 miles on a full charge, but I only managed 22.1 miles of cruising before the gasoline engine kicked in at a preview event earlier this year.

There's not much difference in the on-road feel of the two hybrid models, likely due to the slightly more powerful e-motor on the Plug-in making up for its additional curb weight and keeping that extra mass nice and low to the ground.

The third member of the Ioniq family is the fully electric Ioniq Electric. This model completely ditches the gasoline engine in favor of an 88 kW e-motor -- at 217 pound-feet of torque, it's the most powerful e-motor of the three Ioniq models. It's also got the biggest lithium-ion battery pack at 28.0 kWh.

Hyundai says that the Ioniq Electric will cruise for 124 miles on a single charge of that battery pack, which will take 4 hours on a standard level 2 EV charger. (The automaker wouldn't give a charge time for 110V level 1 charging, stating that the included wall outlet trickle charger should only be used for emergencies.) The 124-mile range would be more impressive if Chevrolet hadn't just hit the road last month with the Bolt claiming 240 miles, but Hyundai's numbers are still respectable considering its car is a bit more affordable.

DC fast charging is a standard feature on the Ioniq Electric -- and a paid option on competitors like the Leaf and Bolt -- which allows the EV to rapidly juice to an 80-percent charge in just 30 minutes at a compatible station. Also interesting is the use of a compact combo charging port, which Hyundai says saves space relative to the CHAdeMO DC fast-charging port.

The EV boasted very good amounts of instant torque when I needed to pass as well as smooth acceleration, thanks to its single-speed transfer case -- the power is never interrupted by shifting. The larger battery pack takes up more room beneath the Ioniq's body, so Hyundai chose to equip the EV with a more compact, but less sophisticated, torsion beam rear suspension rather than the same multilink that underpins the hybrids. Somehow, the EV managed to still feel composed enough on the twisty bit of wet road that I was able to test it on. Overall, I enjoyed my time behind the wheel of the Ioniq Electric.

Perhaps the weirdest element of the Ioniq Electric's on-road performance is the use of paddle shifters on the steering wheel to adjust the amount of regenerative braking. There are four levels, ranging from Level 0, which is almost none when lifting from the throttle pedal, to Level 3, which kicks in so much regenerative braking that you can practically drive the Ioniq with one pedal. In practice, it's actually very easy to get used to and feels more natural than the Chevrolet Bolt's weird full-regen paddle pull.

I finished my 30-mile leg in the Ioniq Electric with the trip computer reading an average of 5.2 miles per kilowatt-hour. Doing the math, that works out to about 175 miles per gasoline equivalent (mpge). That's significantly higher than the automaker's own estimate of 136 mpge, so I'm taking that estimate with a huge grain of salt until I can do further testing.

Though prototypes were available for me to drive, the Ioniq Plug-In Hybrid won't actually be available to buy until the fourth quarter of 2017. Pricing, packaging and even final fuel efficiency numbers have yet to be announced.

And the Electric model came online in April 2017, but only in California for the foreseeable future. It is offered in two trim levels: A base Electric trim for $29,500 and a better equipped Limited model for $32,500 before its optional $3,500 Ultimate package.

Add $835 to all Ioniq models to get the drive-away bottom line, but don't forget that the EV is eligible for up to $7,500 in Federal tax credits and a $2,500 California Clean Vehicle Rebate. With these credits, the Ioniq Electric could roll off of the lot for as low as $20,335. Not bad at all.

Finally, two interesting tidbits to consider are the warranty and Hyundai's experimental EV leasing program. All Ioniq models feature a lifetime warranty (non-transferable) on their lithium-ion battery packs, which lives alongside the 10-year powertrain warranty. Secondly, the automaker is experimenting with an "Ioniq Unlimited" leasing program that includes all maintenance and reimbursement for charging costs for 36 months and up to 50,000 miles. Final pricing for this program starts at around $275 per month.