2017 Prius Prime review: ​Plug-in Prime is a better Prius, but at what cost?

The new plug-in hybrid is more efficient and flexible than the standard model, but the eco gains come with a few compromises.

Believe it or not, I'm actually a fan of the standard Toyota Prius -- but don't go telling everyone that, I've got an image to maintain. Over four generations, Toyota has continued to refine and improve its signature hybrid into one of the most fuel-efficient cars that you can buy without a plug. (It's second only to the new Hyundai Ioniq Hybrid.) Of course, adding a plug to the equation -- and all of the advantages that come with a plug-in hybrid -- should only make the Prius more desirable.

The Toyota Prius Prime's plug-in hybrid power train is more flexible and efficient than the standard model. It boasts 25 miles of electric range per charge and up to 133 mpge.

The 2017 Toyota Prius Prime adds much flexibility and efficiency to the Prius's eco package with its electric range, but its compromises can make it more frustrating to live with.

Only, Toyota didn't just add a plug and a bigger battery to the 2017 Prius Prime and call it a day. The automaker also made a host of changes to the cabin tech, visual style and features, some good and some very bad.

In the end, the Prius Prime is, in some ways, worse at being a car than the standard Prius liftback while also being a much better Prius. I'm sure that sounds confusing, so allow me to explain.

Beneath the Prius' hood is a mostly familiar version of Toyota's Hybrid Synergy Drive (HSD) power train. The system pairs a 1.8-liter Atkinson cycle four-cylinder engine with a 53 kW electric motor. The gasoline engine supplies 95 horsepower and 105 pound-feet of torque and the electric motor adds 71 horsepower and 120 pound-feet of torque to the mix. Peak system power is stated at 121 horsepower, because hybrid math is never as simple as addition; total system torque is not stated.

Being the plug-in version of Toyota's signature hybrid means that the Prime also needs more electric capacity to take advantage of its ability to plug-in and recharge. So, Toyota has outfitted the PHEV with a larger 8.8 kilowatt-hour lithium ion battery pack. (For comparison, the standard Prius is only packing 0.75 kWh. Now, all of that extra battery hardware has to go somewhere and, in the Prime's case, it ends up significantly eating into the trunk's capacity. Plug-in drivers only have about 19.8 cubic feet of cargo space (down from 24.8) behind the second row seats and even less if they want to use the privacy cover to hide their belongings from view.

For the trouble, each recharge of the larger battery pack grants the Prime driver an EPA estimated 25 miles of gasoline-free, full-electric motoring. From flat, the Prime's battery charges at Level 2 speeds in about 2 hours.

The EPA reckons a combined fuel economy estimate of about to 133 mpge for those first full EV miles and 54 mpg for each gasoline-fueled mile beyond. With daily recharges and about 50 miles driven per day, I averaged at between 80-90 mpge for the week though, with more consistent charging or a commute with fewer highway miles, I could probably do much better.

I may be wrong, but it feels like the PHEV is less stingy with its electrons when it knows there's a reasonable reservoir at its disposal. In EV mode, the Prime feels fairly confident with strong acceleration and that immediate electric car torque that makes the throttle feel very responsive.

The extra efficiency is sweet, but I also appreciated the flexibility that the PHEV afforded. For example, I didn't have to use the 25 miles of EV range first. With the touch of a button, I was able to toggle manually between hybrid, electric and automatic drive modes to conserving the electric range for an urban segment at the end of a highway commute where it can have more impact on overall efficiency. Or, I could just let the computer figure it all of that out for me.

In its regular, gasoline-electric hybrid operation mode, the Prime starts to feel like exactly what it is: a heavier Prius. Despite increased use of lightweight composites in its construction, the extra batteries add a bunch of weight to the equation -- about 300 pounds for those counting. In its hybrid mode, the electric torque is less apparent, so I could feel the weight when trying to maintain speed uphill, pass on the highway or round a bend.

Besides the whole plug-and-battery bits, the biggest change for the Prius Prime happen in the dashboard, which is a bit of a mess. Toyota has equipped the plug-in hybrid with a massive vertically oriented 11-inch color display. It's a flashy unit with bright colors that are sure to evoke oohs and aahs from passengers, but the interface itself leaves much to be desired.

The physical display is easily washed out by the sun and reflects much glare; so I've got this massive screen and half the time I can't see it. And at night, even in its darkest setting, the mega-screen is still too bright.

The user interface is all over the place. There's a massive map that serves as both the home screen and the backdrop for widgets that slide in from the bottom and sides of the display, giving access to other functions such as audio source, climate controls and destination input. In the city, that map can get very cluttered with streets adding a lot of visual noise to the interface and, ironically, making it hard to find my position on the map, which tends to move around depending on what elements are being displayed.

Beneath the visual clutter are many of the same complaints that I had about the standard Toyota Entune setup, including a menu system that makes complex work of simple tasks like changing the radio station.

No, the learning curve is not insurmountable and by the end of the week I was at a point where I could use it without fear of crashing, but I never grew to love the setup and honestly would have preferred the smaller screen of the standard Prius. At least it wouldn't be constantly distracting me with movement on my periphery. And it's not that I hate large screens; Volvo's Sensus setup does more with a similar configured display but it's just easier to live with thanks to better design. 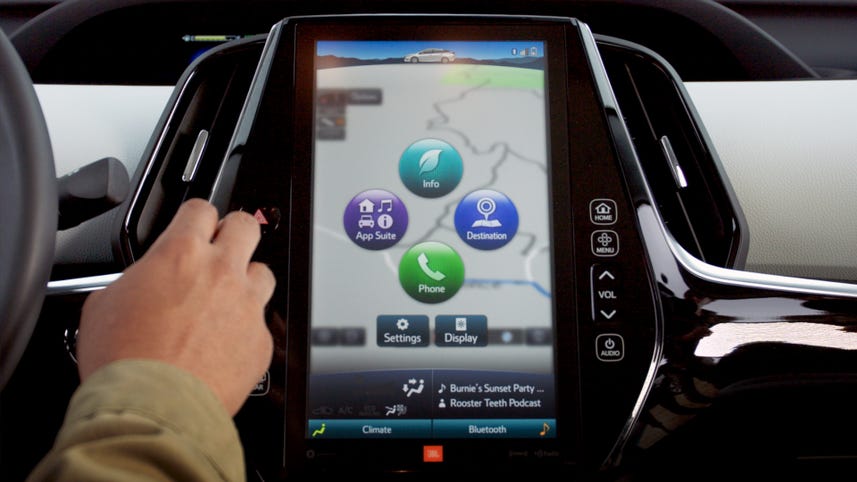 Behind the dashboard tech, the Prius Prime's onslaught of audible alerts is next on my list of pet peeves. I can understand when the car beeps for a blind spot or for a rear cross-traffic alert. I can even understand a beep for lane departure warning. I don't understand why the Prime needs to beep constantly every time I put the car into reverse and, unlike the other alerts, I could not find a way to defeat the reversing beeps, which made parking way more obnoxious than it needed to be.

In the positive column, the driver aid suite does include some desirable features like adaptive cruise that works in stop-and-go traffic and lane departure preventive steering assist -- both come in handy while being distracted by that terrible dashboard display. Additionally, the Prime can be had with semiautomatic parallel parking. I'm usually a fan of this feature, but the one time I tested it, the Prius curbed its own wheel. It may have been a fluke, but I've never seen that happen before and did my own parking for the remainder of the testing.

Better Prius, but not a better car

Mechanically, the 2017 Prius Prime lived up to my expectations. The extra overall fuel economy is better and the silent EV range is nice. I also like the way the Prime accelerates and responds to throttle inputs in its electric mode. Toyota had a good foundation on which to build its plug-in hybrid and ended up with a good PHEV.

If only it had stopped there. Instead, Toyota added a lot of unnecessary compromises and small frustrations with the dashboard tech that, when combined with the physical compromises like weight and storage space, make the Prime harder to live with on a daily basis.

The 2017 Prius Prime starts at $27,100 for the entry Plus trim level and ranges up to $33,100 for our loaded-up Advanced model. Add an $885 destination charge to reach our as-tested price of $33,985 before incentives. However, with up to $4,500 in tax credits and incentives available to Prime buyers, the PHEV could end up with a lower bottom line than the HEV. For example, the base Prime Plus is up to $2,085 less expensive than the standard Prius' starting point. So, if you can live with the tech, it's hard not to recommend the base plug-in model for eco drivers on a budget.

However, the 2017 Chevrolet Volt, with its 50-plus mile EV range and significantly better MyLink tech. is worth a cross-shop for those looking for more potential for long-term savings and fewer frustrations.