Amazfit Bip review: Why can’t more smartwatches be like the Amazfit Bip?

I've come to a realization about wearable tech: more smartwatches need to be a bit more like the Amazfit Bip. As in: easy, cheap, and with excellent battery life.

The Amazfit Bip is a complete fitness smartwatch that's a remarkable bargain. It has an always-on display, weeks-long battery life, plus extras like heart rate, GPS and water resistance. Works with Android and iOS. Gets notifications.

Plastic design and limited watch faces aren't as flashy as premium smartwatches. Mi Fit app isn't as refined as Fitbit for fitness or health tracking. No installable apps. Onboard features like stopwatch/timer can't run in background.

The Amazfit Bip is affordable, has fantastic battery life, and is the best low-key casual smartwatch around. It's a fine replacement for your old-school Pebble, minus the apps.

After spending a few weeks living with the Amazfit Bip smartwatch, I'm still struck by how great this thing is, given its rock-bottom price: $80. In the UK it can be had for £70, or AU$99 in Australia, and it's often on sale for a bit less in all three locales. This is a watch that crept out of nowhere, surfaced through online sales: it's made by Huami, a company that also makes all of Chinese electronics giant Xiaomi's wearable devices, like the Mi Band 2. Huami's own wearable brand is Amazfit, and the company's low-priced Amazfit Bip is widely available to US customers on Amazon. By great, I mean fine and basic and functional. And, maybe, for some, that's what matters most.

"What's the catch?" you're thinking. Because there's no way this budget smartwatch can be as good as the Fitbit Versa and Apple Watch Series 1, which cost more than two and three times as much, respectively. And, yes, the Amazfit software is a bit rough around the edges, and syncing with Android phones and iPhones can sometimes be frustrating. But, this is the truest spiritual follow-up to the old Pebble 2 watch that exists. Fitbit may own Pebble's sofware, but Amazfit owns the Pebble hardware feel.

In terms of basic convenience, the Amazfit Bip actually surpasses some important basic aspects of those models. It's got an always-on display that's easy to read in direct sunlight, and its battery can go for weeks between charges. (Yes, you read that correctly.) And yet it still packs heart rate tracking, GPS and basic notifications from your phone. It's water resistant, too.

Other Bip devotees at CNET have been wearing the watch even longer than I have: Rick Broida has been singing its praises for months, and now Jeff Bakalar, who sits across from me at the office, is a convert. (Jeff bought a Fitbit Versa, hated it, returned it, bought a Bip, and has been thrilled.)

So, no, the Amazfit Bip isn't as slick or as polished as the Versa or the Apple Watch. But if you're looking for a full-on smartwatch for less than the cost of most basic fitness trackers, the Amazfit Bip delivers. At $80 or less, it's an easy choice for the best smartwatch bargain out there.

After coming from most everyday smartwatches like the Apple Watch and Fitbit Versa, the Bip's battery life is stunning: think weeks, not days. Its display is always-on, like the Pebble watch. I've gotten to around two weeks on a single charge with always-on heart rate and a bunch of notifications, and a watch face that updates the seconds, so it's always in motion. You could do even better by adjusting heart-rate ping in settings, or changing watch faces. Amazfit promises 45 days (yes, you read that right) of battery if you don't keep heart rate always-on.

Honestly, the battery life's already so long that I keep forgetting where the charger is. The Bip uses a weird proprietary charger like all wearables do. The Amazfit Bip charger's cradle design is big but similar to the Fitbit Versa charger design.

But I love that I can wander around and not worry that my watch's battery is about to die.

The always-on display has already spoiled me

Much like the old Pebble watches, the Amazfit Bip uses a transflective color display that's like an old color Game Boy (before the backlit ones). It gets better the more direct light is on it. In bright sun, it's wonderful. In dimmer light, it's a little tougher to read, but there is a backlight that kicks in when you raise the watch up or press the side button.

Having an always-on display, of course, means I'm not doing some weird wrist-raise or tap to see what the time is or how many steps I've walked. 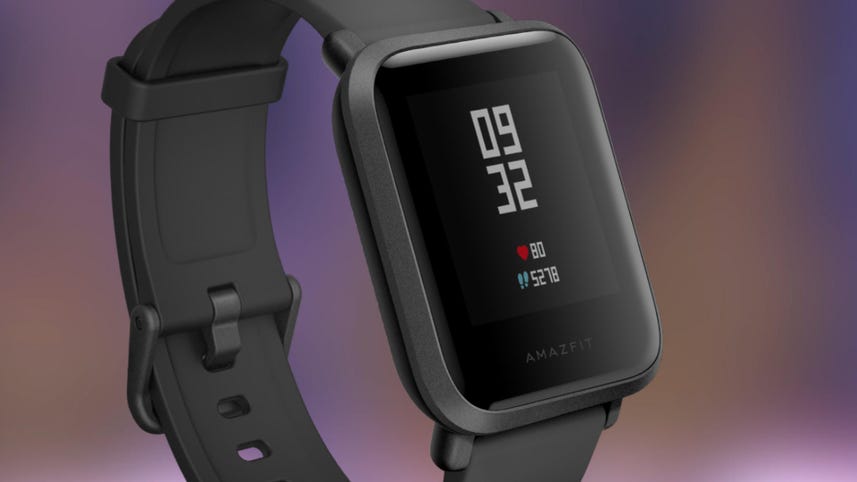 Small, but studded with specs

It's rated as water resistant (IP68), which is shower-friendly but technically not swim-friendly. But I've used it in the pool for hours and it was fine (your mileage may vary). It has heart-rate tracking. It can get phone notifications. It has onboard GPS.

All of that in a little plastic budget watch is pretty nice.

It's kinda ugly, but totally comfy

I no longer feel like I'm wearing a "cool" watch, but that's exactly how I felt when I wore that original Pebble around. It's nicely utilitarian, and its Casio feel might make it a nice counter-fashion look to a super sleek smartwatch. I've gotten compliments on the orange-rimmed model I've been wearing.

It feels really comfortable, too. The rubber band feels soft, the watch is small and lightweight, and it starts to just have that invisible wrist-feel that small watches have and large smartwatches lack.

A Gorilla Glass (2.5)-covered display has lasted decently so far, with no scratches or scuffs I can see.

It gets notifications on iOS and Android

Two clear vibrating pings, and I know I've gotten a Twitter notification. Messages come through clearly, with small text, but totally readable. Another nice touch is that notifications can be toggled by app, so you can get Twitter but not Instagram, text messages but not LinkedIn. I can't respond to messages, but that's fine. Swiping up shows old notifications I might have missed.

Amazfit Bip is amazingly good for the price

So, where does it fall short?

It's not fancy, and it doesn't have a lot of other features. The Bip has swappable watch faces via a Mi Fit app, and a handful on the watch itself. A few mini-features built into the watch show weather (which sometimes doesn't sync on my iPhone), a summary of fitness stats, a timer and stopwatch, a compass (which hasn't ever worked for me) and a QR code-based mini-app for AliPay payments, which I am not going to use here in the US.

But there are downsides to these features: the stopwatch and timer can't be run in the background, making them useless for long-term use. The watch is also sometimes slow to sync, entering a funky type of disconnect state that perhaps is why it's so good at conserving battery. The watch disables the swipeable touchscreen in everyday use, which is good for workouts, but annoying for quick daily use. You have to press the side button to unlock the screen before swiping again each time you use it.

The Mi Fit app, which the watch syncs with on iPhone and Android, is a better-than-expected fitness hub for tracking and showing graphs for steps, sleep, and heart rate, and it even draws a fair number of insights against other users. I'm not wild about using a relatively unknown app for all my fitness data, though. The Mi Fit app lets you add friends and share activity data, but the app feels more isolated than the buzzier Fitbit universe. Fitbit's app and social community is far more geared towards developing fitness plans. But Mi Fit syncs with Apple Health, at least, which Fitbit still doesn't.

I also find other things weird: sometimes the watch's A-GPS settings will update and take over the watch display, syncing when I don't want it to (and taking a while). The phone app settings aren't always easy to navigate.

Watch this: Amazfit Bip vs. Fitbit Versa: Which is more like Pebble?
04:00 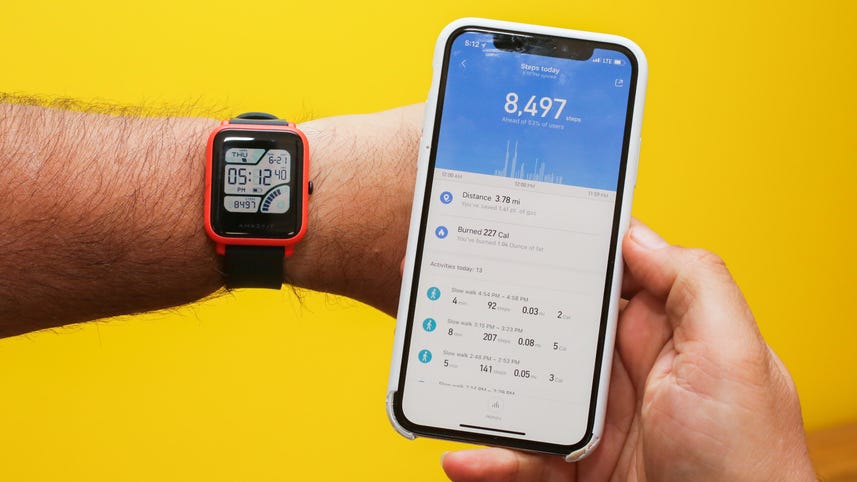 Amazfit Bip vs. Fitbit Versa: Which is more like Pebble?
4:00
Watch Now

For its crazy price, the Amazfit Bip is hard to beat

So, yes: I'm less wild about the app and software than the watch hardware. But at this price -- who cares? You're getting a functional smartwatch for less than the cost of taking a family of four to the movies. The Amazfit Bip just might be the perfect "I don't care about smartwatches" smartwatch. It's the Basic Casio. It works, it's fine, and it's surprisingly hassle-free. And in a landscape of ever-more-premium smartwatches that seem laser-focused on high-end features at the expense of battery life, this low-cost, high-battery watch is what more companies should copy.

Now I just need to find that watch charger.