It doesn't have GPS and you can't swim with it, but that's okay: Series 1 might be the way to go for anyone who doesn't need those top-end fitness options.

Lacks swim-ready water resistance and onboard GPS found in Series 3 models. Only comes in aluminum. Doesn't have the Wi-Fi music streaming and Radio app of Series 3 models.

If you're not a runner or a swimmer, the entry-level Apple Watch has most of what you'll need at a more affordable price.

You don't need a smartwatch. And if you think you do, paying more than a couple of hundred dollars feels pretty hard to swallow.

The Apple Watch is in Year Three now, and there are three choices: the fancy Apple Watch Series 3 that's also a phone, the Series 3 without cellular, and the entry-level Series 1.

The Apple Watch Series 1 is frequently offered on sale throughout the year, and especially over the holidays. Should you buy it?

The Series 1 name is confusing because it's actually newer than the original Apple Watch -- now dubbed "Series Zero" which launched in 2015. In fact, the Series 1 debuted in 2016 alongside the now-discontinued Series 2, but both of them shared the identical second-generation speed and smarts. But if you're looking to get a basic smartwatch and you're not a runner or swimmer, the Series 1 is still probably your best budget bet.

Watch this: Apple Watch as phone: living off the Watch Series 3
03:06 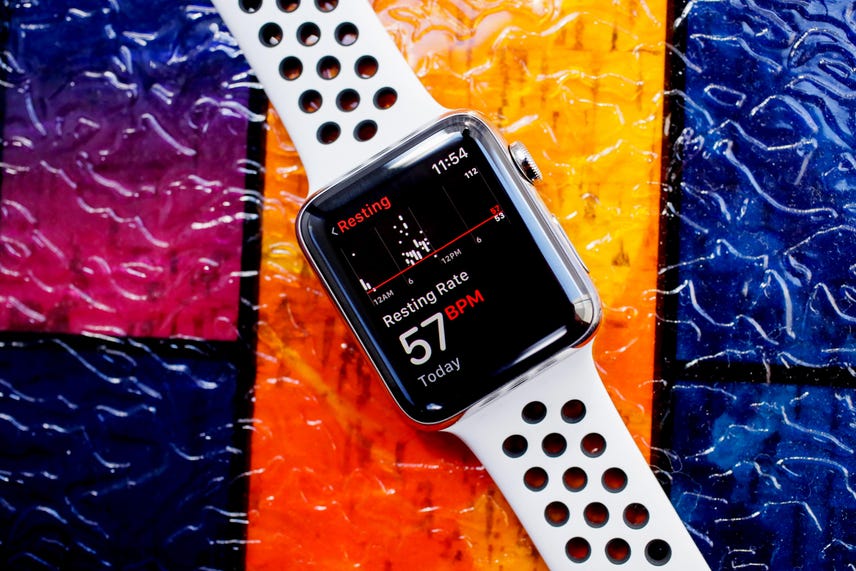 But, keep in mind that the Series 3, for a little more, has battery life, speed, and extras like GPS and added water resistance that are welcome adds for serious everyday fitness users.

The best part about this year's Apple Watch is the new WatchOS 4 software. Like the previous version, it offers a bunch of new features: more heart rate-tracking functions, an improved Music app that now syncs albums and playlists in Apple Music more easily, and better fitness and workout features. And, in addition, a few new watch faces.

Apple Watch Series 1 can use all these features. And, a year later, it still handles well. I wore one on my wrist again, and it's still good -- in fact, for everyday use, it's everything you'd need. It also costs less than the Apple Watch Series 3. But it also feels like less of a great deal this year than it was last year. It's slower, and the price gap between it and the non-cellular Series 3 is smaller than last year's jump from Series 1 to Series 2.

Here's what you're missing out on if you get a Series 1 over a Series 1: GPS, swim-proofing, a brighter outdoor display, slightly faster speeds, slightly better battery life, and access to a few Wi-Fi-streaming features on the Music app and Radio app.

This year, if you can get an Apple Watch Series 1 for half the price of the Series 3 on a sale (it happens, sometimes), it's definitely worth considering. If not, your better bet is the Series 3.

Here's a more detailed look at the differences mentioned above.

Editors' note: This review has been extensively updated since its original publication on November 19, 2016 to account for the new features of WatchOS 4, a lower price and comparisons to the Apple Watch Series 3. The rating has dipped slightly, from 4 stars (8.0 out of 10) to 3.5 stars (7.8).

No GPS, but fine for workouts, step-counting and heart rate

The built-in GPS in Apple Watch Series 3 and Series 2 tracks run data when running without a phone, and maps the route afterwards when you're back at your phone. You can't do that on Series 1, but you can still track runs with it and use it for workouts without your phone. If you're not a hardcore runner, the loss of GPS isn't a big deal. One thing Series 1 does get is the improved heart rate tracking features of WatchOS 4: resting heart rate and walking heart rate averages are calculated automatically.

No cellular option, either (but it works over Wi-Fi)

You have to pay up to get the Series 3 with cellular, and pay an extra monthly cost for data usage with your carrier. But doing so allows the Series 3 to stay connected, use GPS for maps, make calls, stream music, get messages, and get information like weather and news. If you're considering any sort of cellular watch, the Series 1 won't help you. But: if you're on a recognized Wi-Fi network, the Series 1 will connect away from your iPhone. It's best used in places like a home or office.

Not swim-proof, but reasonably splash-proof

I can't swim with Series 1, but I don't swim often anyway. It's splash resistant (IPX7 rated), so it'll survive hand-washing, accidental showers with it on and maybe even a brief dunk. But, in comparison, the Series 3 can be used for swimming in salt or fresh water up to 50 meters.

It won't stream music over Wi-Fi

There's a small key difference between Series 1 and Series 3: Series 3 has some clever ways of streaming Apple Music over cellular or Wi-Fi, and also has a new Radio app that streams Beats One, curated stations, and a few radio stations (NPR, CBS Radio and ESPN). Apple Watch Series 1 doesn't have these. Instead, you'll only play music by pairing to your iPhone, or syncing playlists and albums onto the watch. Syncing music requires the Apple Watch to be charging, so it's not instant gratification. But WatchOS 4's improvements help the Series 1 feel more like an iPod, too, just like the Series 3.

Less onboard storage than Series 3 with cellular, but still enough

The Series 3 cellular model has 16GB total storage, which isn't all user-accessible. The Series 1 has 8GB. Realistically, you're looking at about 2GB of space for music storage. But that's more than enough for a basic collection of tracks to listen and work out with.

Apple Watch Series 1 only comes in aluminum, with too-easy-to-scratch curved IonX glass covering the display -- not the more scratch-resistant sapphire on step-up steel Apple Watch models like the steel one seen in the photos here. Keep in mind, though, the entry-level Series 3 models have the same aluminum-and-glass construction. I prefer the lighter-weight aluminum feel, but I've picked up some scratches on the screen over time. Not a ton, but it's annoying. The more scratch-resistant sapphire only comes in more expensive steel and ceramic models, and you'll be paying a lot for the privilege.

Battery doesn't last quite as long as Series 3 (without cellular)

One minor but noticeable difference is battery life. With WatchOS 4, Series 1 lasts me a full day and a little more. Series 3, with cellular turned off, lasted me about two full days on a charge. But, if you use cellular, expect that to drop down to a day of use at best. The Series 1, in that sense, splits the difference. However, in both cases, I charge the Apple Watch every day as a daily habit, so it doesn't change things much.

Not as fast as Series 3, but it's fine

The Series 3 dual-core processor has speed increases this year, and yes, that means speedier app-opening and a generally zippier performance. The Series 1's older dual processors are still fine, though. Would you notice the difference? Maybe. The Series 3 feels fast, and the Series 1 feels perfectly fine...but slower for doing multiple things like swapping watch faces, or loading fitness apps. That being said, if you don't care about GPS, cellular, or swimming with it, I'd go for the Series 1's budget proposition...if it's on sale.

Apple Watches are ephemeral things: they're not family heirlooms. Pick a model that will work for you now. In time, expect that it will, like all electronics, be outdated. I like spending as little as possible for a smartwatch. The Series 1 is that more budget pick. And it's fine.

The Series 3 is the better smartwatch, though, and at full retail I'd pick it over Series 1. But the Series 1 goes on sale a lot. And, a year later, it still works well.