After a month with the Fitbit Versa, we're looking past its limitations and finding there's still a lot to love.

I wake up to a buzzing on my wrist, in gentle pulses. It's my Fitbit Versa's alarm clock. I'm able to use the silent alarm because I'm wearing my Fitbit smartwatch to bed. I'm able to wear it to bed because Fitbit's new watch lasts several days on a charge. I love that. It's a nice flashback to my days of wearing watches by Pebble -- the upstart smartwatch pioneer that Fitbit acquired in the closing days of 2016. In fact, the Versa is literally, as a coworker said, like the Apple Watch and Pebble had a little baby.

The Fitbit Versa is a compact, lightweight smartwatch and fitness tracker with an improved interface for easier fitness stat readouts. It’s water-resistant to 50 meters, and works with iOS and Android. Many of the apps and watch faces are useful and fun. Multiday battery life beats the Apple Watch.

Its battery life falls short of other Fitbit fitness trackers. The apps and watch faces aren’t always easy to load. Music transfer to the watch is complicated and limited. There's no on-board GPS and the charger is bulky. Tap-to-pay model costs a bit more in the US.

The Fitbit Versa is the best fusion of smartwatch and general fitness tracker under $200, if you can live with its limitations.

I wore the Fitbit Versa while paired to an iPhone X during a week I spent in San Francisco, running around all day at meetings, getting tons of messages and doing three workouts. It's been comfortable, low-key and useful. It gets messages from my phone -- iPhone or Android. The Versa is fully water-resistant for swimming, and it's easy to track my steps, heart rate or start a workout. It's pretty great! And so far, when using the Versa, I miss absolutely none of the features of the more expensive Fitbit Ionic.

And it's affordable, too: It starts at $199 in the US, with a $229 Special Edition that adds an NFC tap-to-pay option and an extra woven wristband. That latter model is also available internationally for £199 or AU$299.

The earlier version of this review was based on a week of living with the Versa. Since then, I've spent more than a month living with the Versa on my wrist, including a vacation with my family in the UK and back at work in New York. It's stayed on my wrist past the review, and I've left the Apple Watch I was wearing behind. The Versa has continued to be a really good daily watch.

Mostly, it's been great from a comfort, notifications and daily fitness tracking standpoint. The improved music remote has come in handy, too. I average two watch charges a week, which is a lot better than the daily Apple Watch charging (or every other day) I was doing.

I also got addicted to using the Versa to track my sleep, something I like doing (and my new daily fitness challenge app I'm using with my wife counts sleep logging as one of its goals, so it's helpful). And the silent alarms on-wrist are great, with good, solid vibrational haptics.

While the Versa lacks the Apple Watch's deep hook-ins to your phone -- and built-in GPS and cellular options -- it's far more affordable, too. Ultimately, I love how Fitbit has chopped away all of the Ionic's unnecessary extras, and focused on the basics. If you can embrace its limitations -- and the Apple Watch Series 1 isn't on sale -- the Versa is the best fitness-friendly casual smartwatch in its price range.

The Versa feels small to me. But that compactness is a positive. It feels less bulky than the 42mm Apple Watch Series 3. But it's also wide -- wider than the Apple Watch -- and the square screen has a lot of bezel around it. Still, I like the design a lot.

The touchscreen is also much more responsive than the Ionic's. Three buttons handle shortcuts for music controls, notifications, exercise start times and alarms. Clicks and click-and-holds can be customized to do other things. You'll have options.

Watch this: Unboxing the Fitbit Versa
02:24 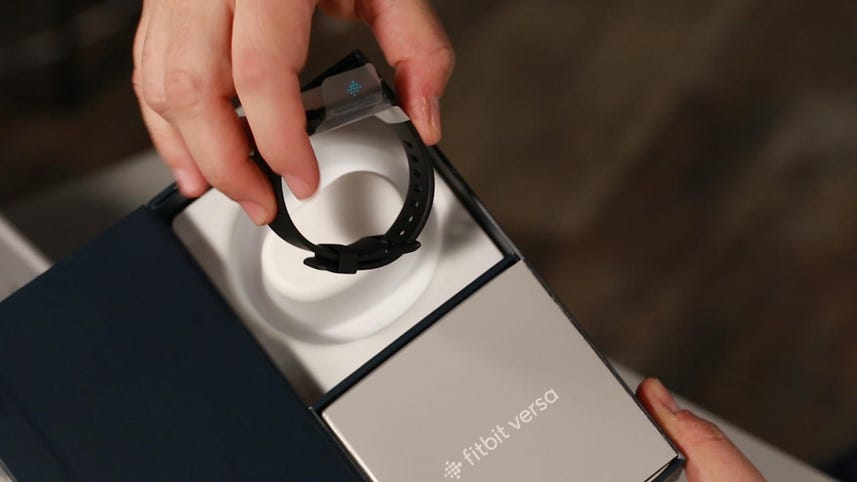 I can get what I need pretty quickly on the Versa, as a smartwatch and as a fitness tracker, and that's what matters most.

The battery life is enough that I can wear the watch to bed. I like wearing watches to bed: I can check the time, I can set alarms, I can track sleep -- all of which Fitbit does a decent job of. It keeps me aware of my terrible bedtime habits.

This Fitbit is also waterproof to 50 meters, like the Ionic and the tiny Flex 2. I wore it in the shower all week, but didn't get a chance to swim with it.

Fitbit's updated on-watch OS has a better design in small ways. (Ionic users are getting the same update, too.) The remote for controlling phone-connected music actually makes sense now, with controls all on one screen. A swipe-up dashboard for fitness tracking stats includes more data. Not as much as I'd like, but the best it's been on a Fitbit: I can scan weekly progress, see recent workouts and look at my resting heart rate.

I compared steps and heartrate tracking against an Apple Watch Series 3 on my other wrist, and against handgrip heart-rate readings on hotel gym elliptical machines. It offered similar readings and accuracy.

A little world of apps

Watch faces: The good, the bad, the ugly

Fitbit has an app store now, called the App Gallery, that launches from within the Fitbit app. Last year's Fitbit Ionic got these apps back in December, though there will be fewer Versa-compatible apps until they're optimized for the newer watch.

Still, there are more than 50 to try already, including some quirky offerings and watch faces that recall the glory days of the classic Pebble Watch -- everything from tip calculators, apps for Nest and Philips Hue light controls, a Starbucks pay-by-barcode app, Flipboard news headlines and Strava. Others include Yelp, the NY Times and E-Trade.

For watch faces, it's a different story: There are already dozens of options from a host of developers, ranging from quirky and nerdy to absolutely ugly. The variety is great, but the quality varies widely, to put it mildly.

Admittedly, developers are making these fast, and mostly for free. (Some are free trials that eventually require payment beyond Fitbit's app, which gets weird.) It's a hobbyist or grassroots developer landscape, much like Pebble was. But it does mean a lot of sifting through the Fitbit app for nuggets.

The Apple Watch doesn't have a watch face store, something that feels ridiculously overdue (and could be coming this year, based on early WatchOS 4.3.1 reports). But Fitbit's mixed bag of watch faces shows the importance of good curation: a ton of bad-looking watch faces could be seen as worse than a few really good ones. I have, however, decided I like the variety.

Here's what made me miss my Apple Watch

Yes, the Apple Watch -- even the "affordable" Series 1 model -- is more expensive than the Fitbit Versa. But with that comes tighter integration with the iPhone (my preferred phone platform), plus the benefit of more mature features, which Apple has been polishing and refining since the first model debuted in 2015.

To that end, here's where the Versa fell short compared to Apple:

Subpar music experience: There's only 2.5GB of onboard music storage on the Versa, and tracks have to be loaded from a computer, unless you subscribe to Pandora or Deezer and sync playlists with those services. None of these options are as good or convenient as the Apple Watch's dead-simple auto syncing from Apple Music  Google's newly rebranded Wear OS watches and Samsung Gear watches are better on this point, too.

Fitbit Pay isn't as big as Apple Pay: Overseas, contactless payment options are much more ubiquitous than in the US, and it's a great travel convenience. Fitbit Pay on-wrist payments exist for global Versa watches (which is the one that costs $30 more in the US). But thus far, Fitbit's payment service doesn't support my bank, so it's a moot point.

Phone calls and responding to messages: At home, it's helpful to have the Apple Watch to field phone calls via speakerphone, Dick Tracy-style. Apple Watch also makes it easy to choose simple responses to text messages. (Android phone owners can do quick canned responses from the Versa.) Now, I'm running around to find my phone again.

No more "Find my phone" pings: I had used the Find My iPhone feature on the Apple Watch daily. Now, I have to make sure I don't actually lose my phone.

No Siri: Ah yes: everyone ridicules Siri, but you'll miss her when she's gone. With Versa, I can't use a voice assistant for quick-action things like setting timers.

Adrift without maps: No more looking to my wrist (or waiting for the taps) for quick directional hints.

Paying for apps and loading them is easier on Apple Watch: The Versa's store is clunky, and doesn't catalog watch faces I've used or gotten. Paying for them is even worse, requiring steps like direct PayPal payments to developers or KiezelPay to get codes that activate these after trial versions expire.

Recording workouts is easy on the Versa, but I don't find the readouts as good as what the Apple Watch offers -- I can't see as many lines of stats and I can't tell the time while working out -- and music controls aren't easy to juggle. Fitbit Coach, a subscription service for workouts, costs extra per month (I haven't used it yet with the Versa), and I'd prefer not to pay for a service for my watch.

Battery life depends on what you're measuring against. The first time I used it, I lasted three days on a single charge, while Fitbit advertises four. Other Fitbits have done better -- some last a full week. Fitbit says that music playback battery life is only 7 hours, but I haven't tested that claim.

The Versa's battery life beats the Apple Watch, but not as much as I expected. And those old Pebble watches I loved lasted five days or more. The included charger is yet another new proprietary Fitbit charger, incompatible with anything but the Versa. The clip-on charge cradle is bedside-friendly, but bulkier to pack.

And, the Versa lacks onboard GPS, which the Ionic and Apple Watch Series 3 have. Runners might miss that, but they should be buying one of those aforementioned models, or something from Garmin. I don't think the vast majority of users will miss GPS, and the tradeoff for the Versa's smaller size was worth it. (You can link to your phone for GPS, however.)

I love it despite its shortcomings

If you're OK with those shortfalls, the Versa is really comfortable, surprisingly nice-looking and fun to wear. The shorter-than-most-Fitbits battery life, still slow-to-download apps and clunky main interface hold it back.

Sometimes I even like that it's a little less deeply hooked in to my phone, because that means I am, too. It's a good companion, with just enough connected smarts.

If you're looking for a general everyday fitness watch right now, I think this is the best option if you're not interested in an Apple Watch.