Though it's largely the same as it ever was, a new Heritage Edition gives us more reasons to get excited about the Toyota Land Cruiser. 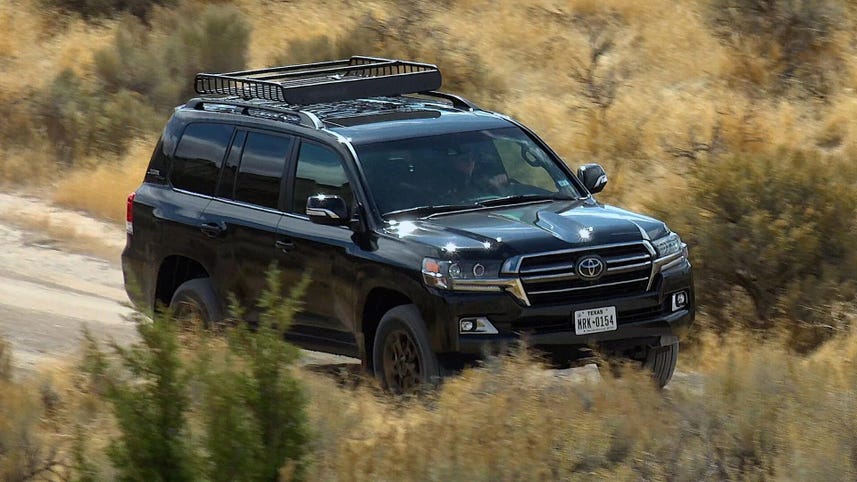 The Toyota is firmly embedded in the off-road cultural zeitgeist. Since it first graced our shores in 1958, it's been a perennial favorite of go-anywhere adventure-seekers, and while the Land Cruiser has indeed grown more luxurious in its current, sixth-gen form, it's still every bit as capable when the going gets tough.

For the 2020 model year, the biggest news on the Land Cruiser front is this new Heritage Edition model, which features some welcome additions and deletes. For starters, the Cruiser's third row of seats has been removed to increase cargo space, which now swells from 16.1 cubic feet to 53.5 -- perfect for a travel fridge or large cooler.

Outside, the Land Cruiser's side steps have been removed for better ground clearance, and the chrome lower body side moldings have been nixed because, let's face it, they're just going to get scratched to hell anyway. A Yakima Megawarrior roof basket comes standard on the Heritage Edition, and I totally dig the bronze, 18-inch, forged aluminum wheels from BBS. A vintage Land Cruiser badge on the D-pillar rounds out the slightly updated look.

No, none of these upgrades are mechanical, but the Land Cruiser still packs plenty of brawn. Its stout, 5.7-liter V8 engine knocks out 381 horsepower and 401 pound-feet of torque. Mated to an eight-speed automatic transmission, the engine gets the job done with minimal fuss, even if it's not the most sophisticated powertrain out there. Lots of low-end torque combined with full-time four-wheel drive and a locking center differential means the Land Cruiser can make quick work of steep, rocky hills. The 285/60-series Dunlop AT23 Grandtrek tires help with off-road traction, as well.

In addition to its strong, simple powerplant, the Land Cruiser has a two-speed transfer case with a terrain management system to better navigate rocks, dirt, mud and sand. The Toyota's ladder frame makes it super strong and tough as nails, and skid plates protect all the important bits, like the front suspension, radiator, gas tank and transfer case. I especially like the Off-Road Turn Assist feature, which brakes a rear wheel and pivots this big SUV around a tight corner. Super cool.

On pavement, the Land Cruiser soaks up highway miles with ease. The steering is relatively precise and a bit heavy, and while it's not exactly graceful, the Land Cruiser isn't nearly as roly-poly as you might think, given its size and shape. Should you want to tow, the Land Cruiser can pull 8,100 pounds thanks to its standard towing package.

Still, in many areas, it's painfully obvious that the Land Cruiser hasn't had a real update in more than 10 years. The interior design is functional, and nicely appointed with heated and cooled leather seats, as well as a heated steering wheel. But the infotainment screen has poor resolution, and the cabin lacks USB ports and power outlets. The 9-inch touchscreen runs laggy Entune software, and don't even get me started on the lack of both Android Auto and Apple CarPlay.

The good news is that Toyota's Safety Sense P suite of driver-assistance tech is standard. Yes, the Land Cruiser may only have one USB port, but at least it comes with lane-departure warning, adaptive cruise control, blind-spot monitoring and rear cross-traffic alert, all of which make commuting a little less stressful.

That said, all of this comes at quite a price. There's no other way to say it, friends: the Land Cruiser is really spendy. The standard 2020 Land Cruiser starts at $85,315, and the Heritage Edition ups that MSRP to $87,645, excluding $1,325 for delivery. That's a tough price to justify when you're competing with things like the Land Rover Range Rover Sport. For my money, I'd probably get the smaller (but every bit as capable) 4Runner TRD Pro and spend the nearly $40,000 in savings on some kick-ass off-road upgrades. But that's just me.

As for the Land Cruiser's traditional competition, you're looking at SUVs like the Infiniti QX80 and Lincoln Navigator not to mention the Toyota's fraternal twin, the Lexus LX 570. The Lincoln offers the best all-around luxury and on-road manners, but if heading off the beaten path is your top priority, nothing will handle it quite like the stalwart Land Cruiser.

Editors' note: Travel costs related to this story were covered by the manufacturer, which is common in the auto industry. The judgments and opinions of Roadshow's staff are our own and we do not accept paid editorial content.