The Infiniti QX80 gets a revamp for 2018, but it’s not quite enough to make it stand out in the full-size luxury SUV segment.

Sitting inside the huge, full-size Infiniti QX80, I'm eye-level with bus drivers. I'm used to small, nimble cars that can dart through traffic and mark just about anywhere -- cars like my daily-driver Mazda MX-5 Miata. What am I supposed to do with this beast in downtown San Francisco?

Plenty of driver's aids and a new digital rear view camera mirror means the QX80 is a comfortable and easy ride. The new look is an improvement over last year.

The InTouch infotainment system is out of date and needs a complete redesign.

The latest full-size SUV is improved, but struggles to keep up with a healthy group of competitors.

Thankfully, its size is purely deceiving. With easy driving dynamics, not to mention a robust suite of active driver's aids, the QX80 proves a quiet, luxurious steed for city and highway driving alike. Unfortunately, despite receiving a big update for 2018, its age really shows in a number of key areas. 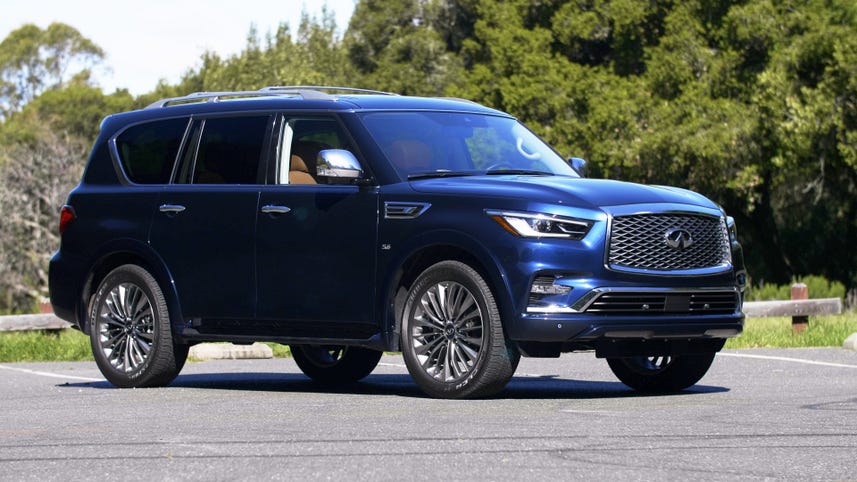 In the past, the QX80 has been rightly accused of having a face only a mother could love. The 2018 redesign is a welcome update, and while it's still not pretty, it's much more attractive than before.

The front fascia has a more streamlined look with LED running lights and headlights. The rear end also gets a nip/tuck, with redesigned taillamps and turn signals that are placed low on the bumper.

Aside from these changes, there isn't much different about the QX80. It still comes with an outdated but smooth 5.6-liter V8, putting out the same 400 horsepower and 413 pound-feet of torque as before, mated to the same seven-speed automatic transmission, coupled with either rear- or all-wheel drive.

The QX80 can tow up to 8,500 pounds, which is comparable to both the Cadillac Escalade and Lincoln Navigator. In terms of hauling, the QX80 has 16.6 cubic feet of space behind the third row, 49.6 behind the second row and 95.1 with all seats folded. The Lincoln Navigator bests the Infiniti slightly, and while the Cadillac Escalade and Mercedes-Benz GLS have more room behind the second row, the QX80 bests them on all-seats-flat space.

The EPA rates the QX80 at just 13 mpg city, 19 mpg highway and 15 mpg combined, and the all-wheel drive blue beast returned an average of 14.6 mpg during my week. Opt for rear-wheel drive and the EPA says you might see 1-mpg improvements in each category.

Because the 2018 QX80 uses the same powertrain as before, its driving dynamics are essentially unchanged. The ride quality is generally comfortable, with light steering and enough power to quickly merge onto the highway with ease.

My tester has the optional Hydraulic Body Motion Control that's packed into the $5,700 Deluxe Technology Package. Considering the 6,000-pound curb weight and sheer size of the QX80, I like this option in theory, but in practice, body roll is still largely present. The technology mitigates this a little bit, I guess, but you can still really feel the heft of the big Infiniti while cornering.

The QX80 has a great set of driver's aids. Blind-spot and lane-departure warnings are on hand, with both active and passive interventions. I can set the systems to only give me an audio or visual warning if I start to drift off-track, or I can ask the QX80 to intervene and bring me back in line.

Adaptive cruise control is also available, and it'll accelerate and brake on its own, keeping a set distance behind the car in front. That's nothing new, but the QX80 also gets Distance Control Assist, which is like adaptive cruise control, but only focuses on slowing you down if it senses you're too close to a lead car. This essentially allows for one-pedal driving, but best used in stop-and-go traffic.

Infiniti does add a bit of convenience tech for 2018, by way of a digital rear-view mirror. It uses a rear-facing camera to show what's going on behind the SUV's big rear end, with a wide scope. Distance depth is hard to decipher, however -- a car that looks like it's about to touch the rear bumper is actually several feet away.

InTouch is out of touch

Infiniti's InTouch infotainment system is housed in an 8-inch touchscreen that can also be controlled via dashboard-mounted dial. I was really hoping for a revamp of this tech in the QX80's 2018 model year refresh, but alas, it's still the same, outdated system as before.

First, there's the frustrating process of having to pair phones via Bluetooth once to make calls, and a second time to listen to music. If I want to listen to podcasts, it's a Bluetooth-only affair. And while it'd be easy to work around that by using Apple CarPlay or Android Auto, neither are available. Great.

The navigation system is mostly fine, albeit with aging graphics. One glaring problem is that you can't search for destinations by category, so when searching for "food" because it's dinner time, InTouch only returns destinations with "food" in the name. Guess I'm not getting to Souplantation tonight.

Wireless smartphone charging isn't available, but first and second rows get two USB ports each, and the QX80 has Wi-Fi connectivity.

For my money, I'd spend the $3,100 to get all-wheel drive. I'd nix the $2,400 rear-seat theater package (a pair of iPads will do the same thing for less money), and would save $2,800 by eschewing the 22-inch wheels in favor of the standard 20s. The Driver Assistance Package adds all the useful safety tech, and feels well worth the $2,900. A tougher decision is whether or not to get the Deluxe Technology Package, with the smart rear-view mirror and Hydraulic Body Motion Control. It's pricey, at $7,500, though also includes a 15-speaker Bose audio system and adaptive front lighting. Infiniti even offers a fun 10x10 tent that attaches to the hatch, and since I like to camp, I'd probably spring the $350 on that accessory.

2018 Infiniti QX80 looks better, but is the same under the skin

The swanky new Lincoln Navigator can be had with niceties like an adaptive suspension and panoramic sunroof. The Cadillac Escalade is a bit outdated, but with Magnetic Ride Control, it's still nicer to drive. Both of these competitors offer Apple CarPlay and Android Auto, and much more modern technology overall. The Mercedes-Benz GLS is arguably the best to drive of the whole set, and comes with that shiny Three-Pointed Star on its nose for added cachet.

As it stands, the huge QX80 is easy to drive and plenty comfortable, but falls behind the competition. The engine is nothing to write home about, and its InTouch infotainment system is really bad. It may be fresh-faced for 2018, but until it gets a full redo, it'll always be a step behind other full-size luxury SUVs.