This isn't the freshest compact crossover around, but it has a surprisingly versatile interior and offers some welcome technology.

Craig brings 15 years of automotive journalism experience to the Cars team. A lifelong resident of Michigan, he's as happy with a wrench or welding gun in hand as he is in front of the camera or behind a keyboard. When not hosting videos or cranking out features and reviews, he's probably out in the garage working on one of his project cars. To date, he's fully restored a 1936 Ford V8 sedan and is currently resurrecting another flathead-powered relic, a '51 Ford Crestliner. Craig is a proud member of the Automotive Press Association (APA) and the Midwest Automotive Media Association (MAMA).

Despite more than a few noticeable gray hairs, Nissan's trusty Rogue SUV keeps on chuggin' along. For several years now, it's been the automaker's best-selling model in America, outpacing even the brand's traditional chart-topper, the Altima midsize sedan, by a wide margin. Sure, the Rogue could certainly benefit from a redesign or at least a healthy refresh, but age doesn't automatically translate into awfulness.

That maturity does, however, mean Nissan dealers probably have to work a little harder these days to move metal, as the competition hasn't been in park sitting on the shoulder. Given this segment's near-pandemic popularity, there's a horde of much fresher compact crossovers out there, models like the excellent Honda CR-V, the redesigned Volkswagen Tiguan, Toyota's fresh-faced RAV4 and the brand-new Ford Escape to name a few. 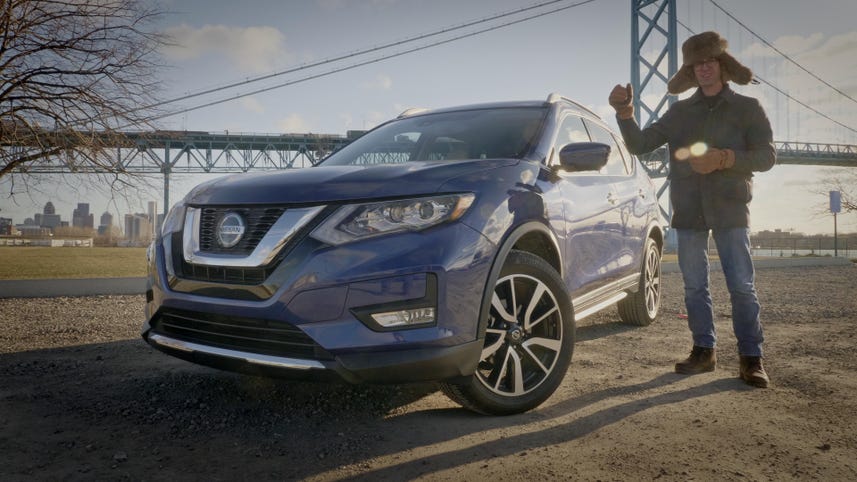 Still, there's a reason people buy the Nissan over other models. Perhaps it's due to the vehicle's relatively simple trim structure, which makes the shopping process a little easier. The Rogue is offered in just three grades: S, SV and SL. Each of those trims can be had with either front- or all-wheel drive. Further cleaning things up, the slow-selling hybrid model has been discontinued for 2020.

Highfalutin' SL models, like the tester I have here, come with a range of amenities including leather seating surfaces, 19-inch wheels and a "premium" Bose audio system that, regrettably, sounds about as nice an antique phonograph. The SL is also equipped with remote start, an eight-way power-adjustable driver's seat and an auto-dimming rear-view mirror.

One clever feature that's standard across the Rogue range is Nissan's Divide-N-Hide cargo-storage system, which allows nearly any driver access his or her inner Marie Kondo. With folding rear-seat backrests and two repositionable floor panels, this smart bit of engineering allows the cargo hold to transform in 18 different ways, enabling you to hide sensitive items, carry taller things, stash soiled articles and much more.

The Nissan Rogue is getting old but it's still worth considering

Fold that second-row flat and the Rogue opens wide, serving up 70 cubic feet of junk-hauling storage space. Keep it upright and there's still more than 39 cubes in the rear. With a little rejiggering, the front passenger seat tips rearward, allowing you to schlepp eight-foot-long items with relative ease.

When it's time to haul passengers, the back bench's lower cushion is mounted unexpectedly high off the floor. This theater-style positioning gives riders commanding views of the road ahead.

Nissan's "NASA-inspired" Zero-Gravity seats are almost always supremely comfortable, offering plenty of support with just the right amount of suppleness. Unfortunately, this application is a rare miss. For me at least, the leading edges of the bottom cushions are a little too low and they won't tilt up enough to properly support my things for long-haul comfort. No, they're not terrible, but they could be improved.

The rest of this vehicle's interior is serviceable. Some of the plastics are starting to look a little dated and there's evidence of pinched pennies here and there but nothing feels insultingly cheap or like it's going to break two months after driving home from the dealership.

In-cabin technology is another area where the Rogue trails some of its rivals. Front and center on the dashboard is a relatively small 7-inch color screen. A navigation system is integrated, as are Apple CarPlay and Android Auto.

This display is home to a Nissan Connect infotainment system, which looks ancient, however, it's relatively easy to figure out. It's also unexpectedly snappy. Pinch-to-zoom on the map, for instance, responds with the zippiness of a modern phone.

One other important bit of technology is Nissan's ProPilot Assist. This adaptive cruise control system with lane-centering tech is standard on SV and SL models. It's a snap to use and extremely effective. In fact, it's probably one of the best of its breed available on the market today, at least at the price point. It seamlessly controls acceleration and braking, automatically adjusting to traffic conditions, plus it offers steering assist, keeping the vehicle in the middle of its lane with none of the back-and-forth ping-ponging you get with some rival systems.

That surfeit of driver-assistance equipment helps the aging Rogue keep pace with more-modern rivals. But as soon as you start driving this vehicle, its dynamics betray its advancing years.

Nissan's trusty 2.5-liter inline-four still motivates this crossover and is the only engine offered. This time-tested workhorse is not particularly pleasant. It sounds haggard under load and feels a touch gritty, but at least it gets the job done with reasonable haste.

With 170 horsepower and 175 pound-feet of torque on tap, this vehicle's performance is perfectly fine. Don't expect the Rogue to outrun some of its turbocharged rivals, but acceleration is still adequate for normal use. Putting it in Sport mode noticeably livens up the throttle response, though remember, this is not a sporty SUV.

I've made my peace with Nissan's continuously variable transmissions. They do a good job of maximizing performance and efficiency, plus they simulate gear changes under heavy acceleration, so the engine doesn't drone… well, it doesn't drone too much.

One major reason automakers love CVTs is because they can help improve fuel economy. The all-wheel-drive Rogue SL tested here is rated at 25 miles per gallon city, 32 mpg highway and 27 mpg combined. These scores compare favorably to similar versions of the CR-V, Escape and RAV4.

When it's time to carve corners, the Rogue's stylish, flat-bottom steering wheel fits nicely in your hands. It's meatier than a side of beef and, unfortunately, it feels just as dead. This crossover's steering ratio seems quite slow and that tiller telegraphs basically nothing to your hands about what the front tires are doing. Like waiting in line at the post office, this is a no-fun zone.

The Rogue is offered with Nissan's so-called Intelligent All-Wheel Drive system, and it does something clever, if not earth-shattering. When taking off, it sends torque to both the front and rear wheels, but as vehicle speed increases, it routes 100% of available twist to just the front axle for improved efficiency. This system can split torque up to 50:50 front to rear as required by driving conditions.

The Rogue starts at $26,000 and change, a figure that, despite its age, is in lock step with the base pricing of major rivals. That outlay gets you an entry-level S model with front-wheel drive. As for the SL all-wheel-drive version I evaluated, it checks out for $36,095, a figure that includes $1,045 in destination charges.

Not to continue bludgeoning a deceased equine, but the Rogue is getting old, and it's probably outclassed by most competitors. Still, there's still a lot to like. It's reasonably stylish, offers a host of helpful technology including ProPilot Assist and is both spacious inside and unexpectedly versatile. I can totally see why Nissan delivers so many of them each year.