2019 Honda CR-V review: Still one of the best small SUVs around

Attractive looks, balanced handling and a comfy cabin keep the CR-V at the head of its class.

Having debuted just two years ago, the current Honda CR-V rolled into the 2019 model year without any noteworthy updates. Besides a simplified model range and a new shade of white paint (woo-hoo!), Honda's fifth-generation small SUV is the same as it ever was. But it's still really darn good. Even as fresher competition like the 2019 Subaru Forester and 2019 Toyota RAV4 have hit the scene, the slightly holder Honda is still more than up to the task of fighting for top honors in a very competitive space.

The Display Audio infotainment system can be laggy when switching between menus and isn’t available with a Wi-Fi hotspot.

For starters, the fifth-generation CR-V's design is still fresh and sharp. Look closely at the exterior and you'll notice numerous character lines sprinkled throughout the bumpers, hood, fenders and door panels. The taillights are molded for a three-dimensional appearance, and there's a healthy assortment of trim finishes including chrome, grey, and black plastic cladding. It sounds like a lot on paper, but the result is a cohesive, attractive appearance. Add in the curvy-spoke, 18-inch wheels, and the CR-V is one of the best-looking CUVs in its class. 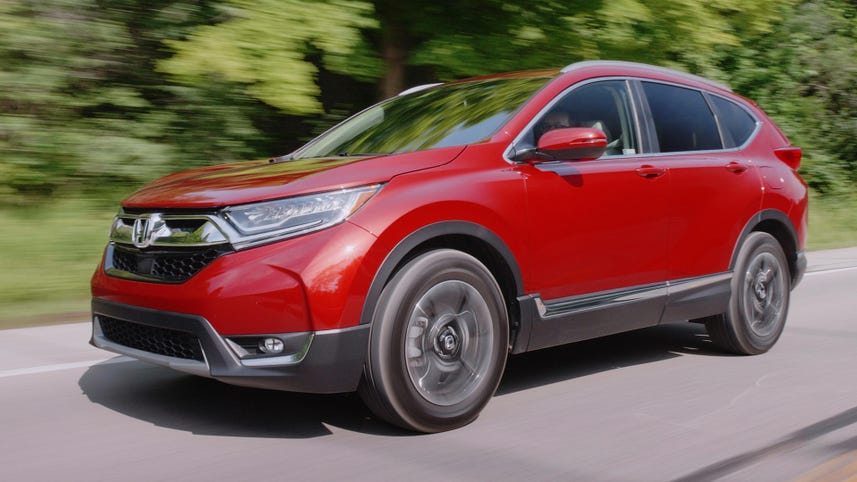 Things are also far from drab inside the CR-V; the cabin has an attractive layout and lots of soft-touch surfaces. I'm not quite on board with the wood trim, but that's the only nitpick I have about the surroundings. The seats offer an ideal amount of side support, there's ample space for adult passengers in both rows and there are plenty of areas to stash items of all sizes.

When it's time to haul stuff, the Honda doesn't disappoint, either, with 39.2 cubic feet of space on offer behind the rear seats. If that's not enough, folding the second-row opens up 75.8 cubic feet -- which came in handy, swallowing goods from a weekly Wong family restaurant supply run which included six cases of foam containers, a big box of Tide commercial cleaner and other various odds and ends.

On the infotainment front, the CR-V gets Honda's Display Audio system that uses a fairly responsive 7-inch touchscreen with not great, but acceptable image resolution. Touring models get onboard navigation, a nine-speaker audio setup, satellite radio and Bluetooth. Apple CarPlay and Android Auto are also part of the deal. Overall, the Display Audio system is pretty easy to learn.

The tech isn't perfect, though. Display Audio doesn't offer Wi-Fi hotspot capabilities, it can be slow to swap between different menus and a wireless charging pad isn't available on any trim level. There are, however, many traditional charging options at your disposal, including two USB ports and a pair of 12-volt outlets upfront. Rear-seat passengers have access to a pair of 2.5-amp USBs on the back of the center console.

With the exception of the base CR-V LX model, which gets a 2.4-liter naturally aspirated four-cylinder engine, the rest of the CR-V lineup is powered by a 1.5-liter turbo-four. It makes 190 horsepower and 179 pound-feet of torque, working with a continuously variable transmission. All-wheel-drive cars return an EPA-estimated 27 miles per gallon in the city and 33 mpg on the highway, which are numbers supported by the 28.8 mpg I observed during a week of mixed driving. 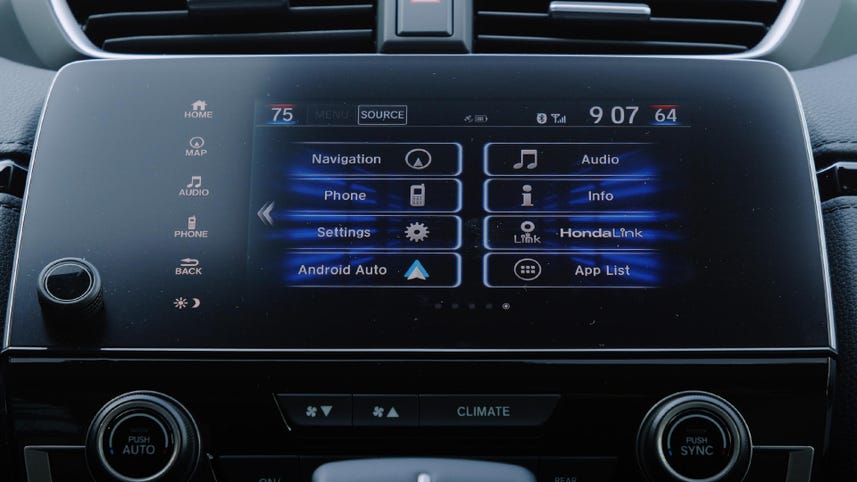 On the road, you can't really call the CR-V quick or slow. Getting onto expressways does require a heavy right foot to extract serviceable muscle, and the CVT tends to drone while hanging out at higher revs. Thankfully, when you aren't going hard on the throttle, the CVT is nicely behaved and quiet. Thank goodness.

Chassis tuning is likely the CR-V's most impressive feat. Honda's compact SUV is remarkably comfortable, riding on 235/60R18 tires with a good amount of sidewall. Combined with a forgiving suspension, the Honda has an excellent ride quality overall but the biggest potholes and ruts get in the way. The well-damped ride is a great asset, especially on Michigan's mostly subpar pavement.

That smooth ride doesn't translate into the CR-V being a pushover in corners, either. In fact, it's decently fun to toss around. Cranks on the steering wheel result in near-immediate turn-in and small amounts of body roll. The CR-V confidently hangs on around corners and changes directions well enough. While it's not as sporty as the Mazda CX-5, it's among one of the tighter-handling small crossovers out there.

Call me a tightwad, but the loaded CR-V Touring's $34,250 sticker price, not including $1,095 for destination, feels a little steep. That's not to say it's overpriced, though -- the CR-V's pricing is right in line with the segment's best.

When setting out to build my CR-V, I would begin with an EX model that begins at a more palatable $27,350. That gets me the turbo engine, Honda Sensing equipment, Display Audio, and blind-spot monitoring. To cope with winter, the EX also includes remote engine start and heated front seats. I'll add all-wheel drive for $1,400 to help cut through snow and get it painted Obsidian Blue. All in, my nicely equipped CR-V comes in at an easier-to-digest price of $29,845.

The 2019 Honda CR-V starts at $24,350 and competes in a segment flush with solid competitors. On top of the aforementioned RAV4, CX-5, and Forester, there's the Chevrolet Equinox, GMC Terrain, Hyundai Tucson, Jeep Compass, Kia Sportage, Mitsubishi Outlander Sport, Nissan Rogue and Volkswagen Tiguan to consider. A new 2020 Ford Escape is on the horizon and likely will definitely be of the conversation, as well.

From that list, the best-rounded choices, to me, are the Honda and Toyota. Both are comfortable, efficient, handle well and aren't boring to look at. Between the two, it's a toss-up for me. At times I favor the RAV4's blockier, more rugged appearance and torque-converter transmission, while on other occasions I prefer the CR-V's sleeker sheet metal and tighter reflexes. Really, I don't think you can go wrong with either. It might be older than some of its competitors, but the CR-V is still a standout in its segment.