Appealing to tens of thousands of people each month isn't easy, but the new Ford Escape pulls it off with aplomb.

Remember the scene in Mrs. Doubtfire where Robin Williams is going back and forth between two restaurant tables, changing clothes with each dash to and fro? That's what I imagine trying to build a mass-market crossover in a hot segment is like -- just a constant blitz in order to try and please every party in sight. With 20,000 to 30,000 Escapes leaving dealerships every month, Ford needs to make sure its crossover can be everything to everyone.

The 2020 Ford Escape is comfortable, efficient and pretty well stocked with new tech.

The inline-3 engine is coarse, rear cargo capacity is a little low and there's no rear-seat USB.

The new Escape has just about everything its segment is looking for.

In that vein, the 2020 Ford Escape is very much a utilitarian product, attempting to appeal to as wide a swath of the buying public as possible. And, in my opinion, it's succeeding more in its latest iteration than ever before.

Space for everyone, and (mostly) everything

Everything might be turning into an SUV, but Ford's latest ute is more carlike than ever before. Now that the Focus is but a glimmer of nostalgia in the automaker's eye, there's space to bring the Escape a little closer to earth and better embody the original idea of what a crossover was supposed to be.

I am a huge fan of the way it looks now. Being lower and sleeker than before helps separate it from the high-sided, high-riding crowd. The front end does carry some piscine aesthetics, sure, but I still think it's an improvement. The only real drawback from its sultrier shape is found in the cargo area, where its 34-to-38-cubic-foot capacity lags behind competitors such as the Honda CR-V and the Toyota RAV4. It's not the most noticeable amount unless you're constantly filling it to the brim, but it's worth pointing out.

The cargo area's net capacity is adjustable because the Escape packs a clever trick -- sliding and reclining rear seats, which not only boosts comfort for rear-seat passengers, but it can ever so slightly expand trunk space in a pinch, too. Even with the seat slid forward a bit, there's plenty of space in the second row for kids and adults alike.

No matter where you're seated, though, the Escape delights. The cloth seats in my SE-trim tester not only have an interesting pattern, but they're are also mighty comfortable and the heated ones up front get toasty in a hurry. The interior design isn't going to break the internet, but everything is laid out sensibly, and I appreciate the flat dashboard, which prioritizes usable room for the driver and passenger. The sort of textured feel of the center console adds a surprisingly premium touch for a car with a starting price well below what buyers are paying on average for a new car these days.

Since families love to shove a bunch of stuff in random places, there's plenty of stock-away storage in the Escape, from its ample glove compartment to deep cubbies in the center console and lower door panels.

Efficient, but rough around the edges

It's safe to assume that buyers in the Escape's segment care more about fuel efficiency and ride comfort than, say, engine note. Those desires are definitely reflected in the 2020 Escape.

The majority of Escapes will likely end up with the engine in my tester. S, SE and SEL trims come standard with a 1.5-liter turbocharged inline-3 producing 181 horsepower and 190 pound-feet of torque. It's a mighty fine engine, offering way more power than the three-pot in the EcoSport. The throttle doesn't do much with a light application from a stop, but with any additional pressure on the pedal, the Escape will hustle forward with authority, whether it's shooting onto the highway or leaving a parking lot. The eight-speed automatic transmission is only really felt on the 1-2 shift, blending into the background otherwise.

This tiny little guy confers some big fuel economy benefits. The EPA estimates my all-wheel-drive SE tester at 26 miles per gallon city and 31 mpg highway, numbers that I have no problem achieving in clear weather. The only real downsides of this engine are the fact that it shakes a bit at idle and the fact that it sounds like a piece of farm equipment, but life is full of tradeoffs.

Speaking of weather, the Escape performs admirably no matter how good or bad it is outside. Halfway through my loan, Mother Nature decides to dump about 10 inches of snow on the Detroit metro area. The Escape's lower stance makes cleaning the roof (a mandatory part of the snow-removal process) a breeze, and the wipers are easy to fold up and out of the way. When it comes to driving in the white stuff, the Escape's all-wheel-drive system works in conjunction with my tester's 225/65R17 Continental ProContact all-season tires to plow through snow with ease. The heater kicks in quickly, and the wiper-fluid nozzles hit every corner of the windshield, ensuring visibility (and safety) when the going gets cold.

Ride comfort is big with buyers, and no matter what's on the ground, the Escape is a softie at heart. The suitably meaty tires on my tester make for a cushy ride, transferring only the harshest of bumps into noise and feel that permeates the cabin. It feels a little stiffer than previous iterations, but that's on purpose, and it leads me to believe that family-laden enthusiasts out there should have no problem squeezing some fun out of the Escape on curvy roads.

The 190-hp I3 might not suit everybody's need for speed (or extreme fuel thrift), but that's okay, because it's not the only game in town. Opt for higher trims, and the Escape picks up a 2.0-liter turbocharged I4 that sends output way up to 250 hp and 280 lb-ft. There are also two hybrid models on offer -- a traditional gas-electric hybrid, and a plug-in hybrid that'll go on sale in the spring.

2020 Ford Escape offers something for everyone

Quality tech, and plenty of it

My tester's SE trim is the first tier above the base S, but it's loaded with a solid complement of standard technology that should give competitors pause. Sync 3 is standard on all but the base Escape S, living on an 8-inch touchscreen in the center of the dashboard.

Sync 3 is attractive, responsive and well laid out, requiring just a couple taps to get to what you need. And there's plenty of features in here, including Apple CarPlay, Android Auto, Amazon Alexa integration, Waze integration and a Wi-Fi hotspot. You need Waze running on your phone to have it work through Sync 3, which I find a little clunky, so I'd recommend just using it through CarPlay or Android Auto instead. Embedded navigation is part of a $695 package that also includes adaptive cruise control, which feels like a screaming deal in this segment, and it's nice that it's not just reserved for the most expensive trims.

Adaptive cruise control is merely the cherry on top of a sundae of standard safety systems across the Escape lineup. No matter your place on Ford's trim spectrum, you'll scoop up an Escape that comes equipped with automatic emergency braking, blind-spot monitoring, lane-keeping assist and automatic high beams. The mandatory backup camera's resolution isn't as good as the one in my four-year-old VW Golf, but it's better than what Ford's used in the past.

My primary technological grievance rears its head when it's time to charge a device. There's a newfangled USB-C port in the center console, and a USB-A port for front-row occupants hidden in the armrest cubby, but out back? Bupkus. Some trims get a 12-volt (cigarette-lighter-style) port in the back, while others make do with a three-prong outlet, but there's no option to put USB ports back there. It's a missed opportunity, albeit one that Ford is likely to remedy in a future update to its bread-and-butter crossover. 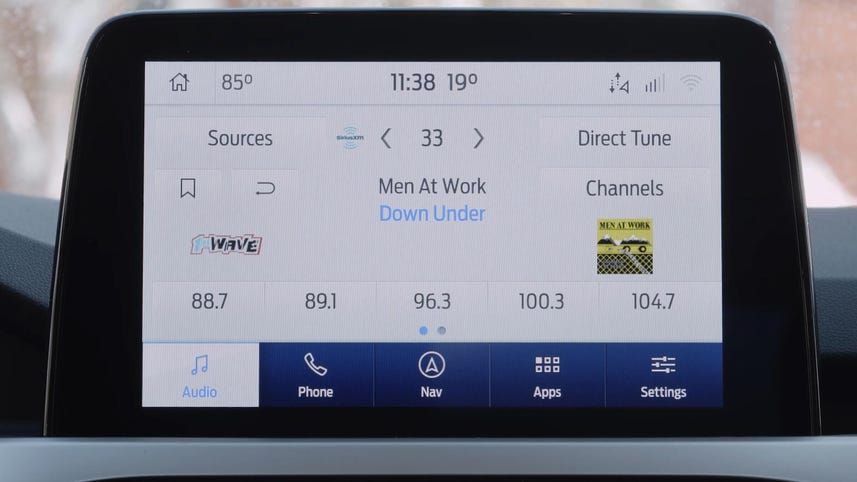 My Escape SE AWD tester is rather sensibly priced, packing all the aforementioned standard tech into a $28,595 window sticker (before destination). Throw in the $695 tech upgrade and $1,095 for destination, and it arrives at $30,385, which is several thousand dollars below the average new-car transaction price in 2019.

I think the SE AWD really is the sweet spot, so this is exactly how I'd equip it, including its attractive Sedona Orange Metallic paint job. Moving up to the SEL adds a handsfree liftgate, leatherette seats and rear parking sensors, none of which I think are necessary, nor do I need the better sound system or additional creature comforts present in the top-tier Titanium trim, but your needs and wants may vary.

The compact crossover segment is a hot one. As comfortably equipped as the Escape is, it has a mountain to climb because it's pitted against other sales champs such as the Honda CR-V, Hyundai Tucson, Nissan Rogue and Toyota RAV4, all of which bring their own benefits (and drawbacks) to the table. The addition of a hybrid trim will keep things interesting, but then again, most of the Escape's competitors have gas-electric variants on offer, too.

Nevertheless, I think the 2020 Ford Escape is well positioned to siphon sales from its rivals. Its well-executed blend of on-road comfort and in-car tech should appeal to a very wide cut of the American public, especially those who might bemoan the everything's-an-SUV-now zeitgeist.