The $315,000 McLaren 720S Spider is the ultimate automotive indulgence.

Driving a McLaren 720S Spider along the canyon roads of Southern California on a Tuesday afternoon feels like playing hooky -- there's no way this is work. The springtime sun warms the leather-wrapped cabin while the 4.0-liter, twin-turbocharged V8 sings the sweet, sonorous song of its people. The whole experience is absolutely indulgent, right down to the sparkles in my test car's flamboyant Aztec Gold paint.

The 2020 McLaren 720S Spider offers all the thrills and sensations of its hardtop counterpart, with the added benefit of a wonderful, open-top drive.

The infotainment system lacks features and, with the top down, sunlight washes out the screen.

This is a car that should feel like the epitome of excess. From its 710 horsepower to its $315,000 price tag, McLaren's 720S Spider is a superlative supercar, and folding the roof back only heightens the experience.

Under that curvaceous skin, the Spider is barely different than its hardtop sibling. The cars share their single-piece, carbon-fiber chassis tub, and no additional bracing was needed to keep the 720S super stiff after cutting off its roof. That means the Spider is only 108 pounds heavier than the Coupe, all of which can be attributed to the electronic roof mechanism.

That's not a huge weight discrepancy, so the two models have the exact same performance specs. There's 568 pound-feet of torque to complement the V8 engine's 710 horsepower, and the Spider will accelerate to 60 miles per hour in a don't-blink-or-you'll-miss-it 2.8 seconds -- just like the coupe. Both cars can reach 212 mph flat out, the caveat being the Spider can only achieve this impressive v-max with the top up. With the roof down, you're limited to just 202 mph. I know, I know -- it's a sacrifice you'll have to make.

Driving the 720S Spider with the top up, there's no discernible difference between it and the Coupe. The Spider's reflexes are just as sharp; steering response is immediate, and met with a generous helping of feedback. This car is so easy to place on the road, largely thanks to the great visibility out the front, the flat cornering characteristics and the seemingly endless grip from the staggered, 245/35R19 front and 305/30R20 rear Pirelli P Zero tires. The huge, carbon-ceramic stoppers offer ample force to slow the 720S from high speeds with a quickness, though I agree with reviews editor Jon Wong's earlier sentiment that the pedal has a little too much travel before those big brakes really bite.

The 720S' full-width active rear spoiler has been reprogrammed for Spider duty, and its aerodynamically optimized movement takes into account the position of the retractable hardtop. Stomp on the brakes, and like on other 720S models, the big wing acts as an airbrake for added stopping force.

It's all very sublime, this 720S, and that's before you get to the tremendous power on offer. I actually like that the 710 horsepower and 568 pound-feet of torque aren't delivered until 7,500 rpm and 6,500 rpm, respectively; you have to keep the engine revving high to really make the most of its power. This makes the whole experience a lot more involving, and more exciting. There's a real jolt of power that hits you after the initial turbo lag, and the engine happily hangs on near its 8,000-rpm redline before you give the big, carbon-fiber paddle shifter a pull to command an instantaneous upshift.

As with McLaren's other cars, the powertrain and chassis have three different settings -- Comfort, Sport and Track -- adjusted by great-looking dials on the center stack. Buttons in the middle of these dials allow you to completely disable the stability control and put the sequential transmission into a manual mode, though I recommend only doing the latter on public roads.

Another fantastic trait of all McLaren cars is how amicable the suspension is. When you're on full attack, it won't allow for an inch of body roll, but the four-wheel adaptive dampers don't translate every asphalt nook and cranny through the chassis or steering. The 720S is as lovely to drive on smooth ribbons of pavement as it is on crummy, pockmarked streets. Even Roadshow's Detroit-based editors find the 720S to be a surprisingly supple affair as they dodge crater-sized potholes on Michigan's notoriously horrific roads.

The roof takes 11 seconds to stow and can be operated at speeds up to 31 mph. A glass deflector can be raised or lowered electronically, so you can control just how much wind you want whisking through your hair. Even with the side windows and rear deflector completely lowered, McLaren has done an excellent job of controlling the way wind flows around the car. Driving at 70 mph with a passenger, you can hold a conversation without having to shout, though it only takes a flap of the downshift paddle and a heavy right foot to drown out your blah-blah-blahs with the roar from the V8 nestled just behind the cockpit.

There's just one little problem. When the top is down on a bright day, sunlight completely washes out the 720S' infotainment screen, making it super hard to use -- especially while driving. Not that McLaren's 8-inch multimedia display is a real joy to use even in ideal conditions, mind you. Yes, there's a lot of functionality built into McLaren's software, and the 720S will show you performance driving data and track telemetry pages. But the menus and controls are often illogically organized and difficult to navigate, and simple commands seem to take extra steps to perform. Don't count on Apple CarPlay or Android Auto for infotainment serenity, either, as McLaren doesn't offer this smartphone-mirroring tech.

The rest of the cabin is nicely appointed, with soft leather on the seats, doors and dashboard, as well as attractive metal accents and tasteful bits of carbon fiber trim. The switchgear all feels great in my fingertips; there's a satisfying weight as I click the drive mode controls left or right. If I'm nitpicking, the sculpted leather seats lack a little support, though they're far more comfortable than the optional carbon fiber buckets over long distances. There's also a shortage of storage space, too -- the center console is only barely big enough for a smartphone, and the front trunk will carry just 5.3 cubic feet of cargo. Pack light, y'all. 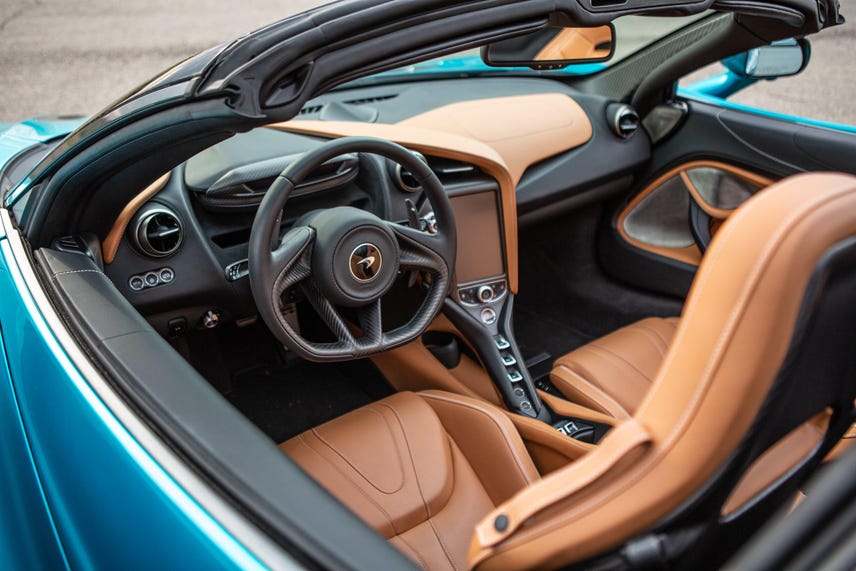 Still, these are very small concessions to make for a car as unrelentingly enjoyable as the 720S Spider. This is one of the finest supercars in the world, and opening the roof delivers a rush of endorphins, better connecting you to the visceral experience of fast motoring with one of the best-driving cars you can buy today.