Gorgeous to behold, impeccably crafted and a smooth operator, this lovely three-row crossover is not necessarily the best option available today.

Craig brings 15 years of automotive journalism experience to the Cars team. A lifelong resident of Michigan, he's as happy with a wrench or welding gun in hand as he is in front of the camera or behind a keyboard. When not hosting videos or cranking out features and reviews, he's probably out in the garage working on one of his project cars. To date, he's fully restored a 1936 Ford V8 sedan and is currently resurrecting another flathead-powered relic, a '51 Ford Crestliner. Craig is a proud member of the Automotive Press Association (APA) and the Midwest Automotive Media Association (MAMA).

This may be the best-looking three-row crossover on sale today. Even though it's getting on in years, the Mazda CX-9 is still an exemplar of good taste, beautiful to behold both inside and out.

But should style really matter when it's time to purchase a family-schlepping utility vehicle, one that will be packed with kids and their associated paraphernalia, camping gear, pieces of furniture and outsized hauls from monthly Costco runs? Probably not. Things like fuel economy, pricing and especially capaciousness are far more important factors to consider. And in some of these areas, the CX-9's beauty is truly only skin deep. 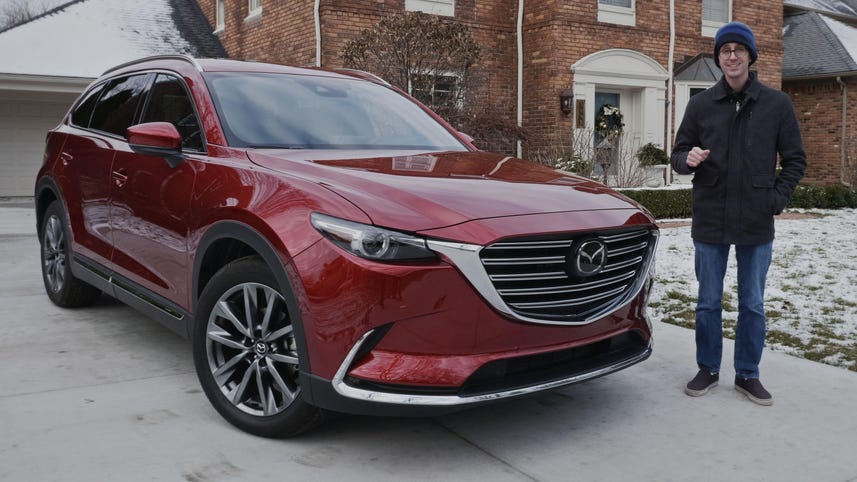 The CX-9 competes in a crowded field, one rife with excellent options. It squares off directly with vehicles like the Honda Pilot, Kia Telluride, Toyota's redesigned Highlander and the new Hyundai Palisade as well as the Chevy Traverse and the Ford Explorer. Those two Korean offerings are probably its strongest competitors, having won critical praise, though the Highlander will certainly siphon off risk-averse drivers who want long-haul reliability above all else, while the Explorer will probably draw in the patriotic sort who want something a little more red, white and Blue Oval.

Providing buyers with a nice menu of choices, the CX-9 is offered in four models: Sport, Touring, Grand Touring and Signature. As in competitive models, front- and all-wheel drive are available, though four-corner traction is standard on the top-shelf variant, which is what I'm reviewing here.

Pretty but slightly impractical sums up the 2020 Mazda CX-9

Making even the base version worthy of consideration, the CX-9's list of no-extra-charge equipment is long and includes things like rain-sensing wipers, heated front seats, automatic high beams, LED head- and taillights plus three-zone climate control. In addition to all that, Mazda's i-Activesense suite of driver aids is included, with stuff like adaptive cruise control, automatic emergency braking, lane-keeping assist and blind-spot monitoring with rear cross-traffic alert -- a veritable smorgasbord of driver-assistance tech.

As you'd probably expect, capping off the CX-9 range, Signature models are fitted with the most goodies. In addition to all those standard fripperies, Nappa leather, aluminum accents and Santos rosewood trim propel this model's interior to luxury-car heights. Beyond that, my tester is also fitted with heated, second-row captain's chairs, 20-inch wheels and a Bose sound system with 12 speakers, which in today's world really isn't that many sound emitters, but it will still tickle even the most jaundiced audiophile's ears.

A dashboard-mounted screen spanning 7 inches is standard, but Touring models and higher gain a 9-inch display. They also benefit from Apple CarPlay and Android Auto. Thank goodness, because the infotainment system is a mess. Not only is its user interface confounding, but many of the icons look ridiculous. Did Mazda design this, or was it done by the folks at Playskool?

This utility vehicle's front buckets are reasonably comfortable, though they're not my favorite chairs in the business. Still, great news for drivers in colder climates: The vehicle's seat heaters are so scorching that gentlemen motorists are sure to fear for their ability to have children. On high, they're real giblet roasters.

Regrettably, the CX-9's second-row buckets, which are also heated, are not particularly comfortable, either, though a handy center console divides them, housing a pair of all-important USB ports and enough room to store plenty of stuff.

As for the third-row bench, it's tight on both head- and legroom. At 6 feet tall, my noggin gets jammed right into the ceiling if I try to sit back there. As I always say, the third-row seat in vehicles like this is best left to kids. At least Mazda provides another pair of USB ports as a consolation prize. You may end up with a few dislocated neck vertebrae, but at least your phone will be charged so you can call a chiropractor.

The CX-9's interior may be prodigiously premium, but even though in size it's similar to its major rivals, it offers significantly less storage capacity behind each row of seats. For instance, the Volkswagen Atlas, which is about as unexciting a three-row crossover as you can get, is more than an inch shorter overall, but it has nearly 26 additional cubic feet of maximum cargo volume. Space efficiency is not this Mazda's forte.

Fortunately, refinement is. Even at highway speeds, the CX-9 remains hushed, with very little wind or road noise penetrating its NVH defenses. This crossover's ride is also dialed in; it carries itself better than some "luxury" vehicles. Impacts are effortlessly absorbed and digested, which, in a word, makes the entire chassis feel slick. When hitting bumps or potholes, there's no grittiness or vibration to this Mazda's responses.

There's a certain precision to this cabin, and you get the impression every little detail was agonized over by entire teams of designers and engineers. The general design is elegant and clean, plus the materials used are impressively premium. Assembly quality is flawless.

There's  lot of kit and caboodle to keep track of here, but things are much simpler ahead of the firewall because just a single powertrain is offered in the CX-9. This one-and-done strategy is welcome because it keeps things simple, though some buyers might appreciate a little more choice under the hood.

Pushing the CX-9 and its contents around is a 2.5-liter turbocharged I4. This forced-induction four-cylinder has been tuned for greater responsiveness instead of whopping peak numbers. It delivers a Kilimanjaro's worth of low- and midrange torque, exactly what you want in a midsize crossover like this.

Fattening up this part of its powerband is a restricted exhaust outlet that helps increase the velocity of exiting gasses, to spin the turbo faster. At higher engine rpm, a secondary valve opens to allow greater flow and help generate more boost. With direct fuel injection onboard, that gets you 250 horsepower and 320 pound-feet of torque if you put 93-octane fuel in the tank. Cheap out and fill 'er up with 87 and you can expect 227 hp and 310 lb-ft.

Bolted to that engine is a six-speed automatic transmission. In a world where eight-, nine- and 10-ratio gearboxes are the norm, only having half a dozen gears seems downright old-fashioned, like churning your own butter or darning socks. On paper, this transmission may be outmoded, but in practice it works pretty much flawlessly, shifting smoothly and intelligently, dropping ratios as needed, though there's so much torque downshifts often aren't necessary.

This vehicle's turbocharged engine is pleasant enough, delivering a wallop of low- and midrange torque as advertised. Still, the CX-9 doesn't feel all that fast. Acceleration is quick enough, but it still leaves me wanting more. The vehicle seems a step or two behind the pace set by some rivals, and I'm not even talking about outright performance models, like Ford's 400-hp Explorer ST.

Another downside is that this Mazda's powerplant feels a bit gritty. The CX-9's ride quality may be creamy-smooth, but its engine vibrates more than expected. It won't shake your dentures out or make your palms go numb, but it certainly could be better isolated.

As for fuel economy, with standard all-wheel drive, this model stickers at 20 miles per gallon city and 26 highway. Those scores result in a combined rating of 23 mpg, which shouldn't blow your budget.

But you know something? The base price just might. A bare-bones CX-9 Sport starts at about 35 grand. That makes it thousands of dollars more expensive than many major competitors, though an entry-level Highlander does come close to that and the new Explorer is a bit more.

The luxurious Signature version I tested checked out for a whisker less than $48,000, including destination charges. Is it worth that much? Well, you have to decide if style, a premium interior and fancy features are more important than versatility. This Mazda is definitely an emotional option in the three-row-crossover segment, but it is by no means the most practical.