With more amenities and driver's aids than other crossovers in its class, Kia's new Telluride deserves your attention.

Don't be fooled by the Kia Telluride's big, boxy shape and available seating for eight passengers. Kia's latest and greatest plays in the highly competitive midsize crossover class, with the Chevrolet Traverse, Honda Pilot, Subaru Ascent and other mainstream SUVs squarely in its sights.

Kia is going all in on the boxy look. You'll only find a few curves across the SUV's sheetmetal. A wide grille, broad hood, vertically stacked headlights and an upright windshield lend to this large-and-in-charge stance, while more rakish details like the curved taillights with LED elements strike a distinctive signature out on the road. 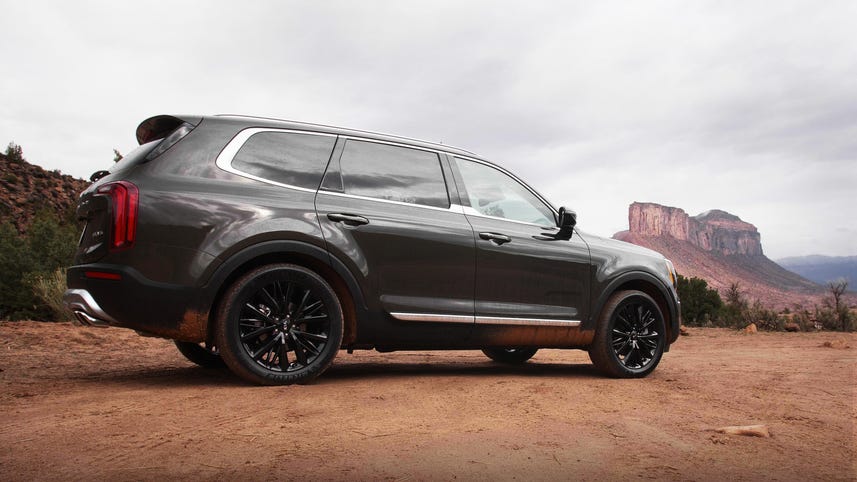 Available in LX, EX, S and SX trims, every Telluride is powered by a naturally aspirated, 3.8-liter V6 engine, with 291 horsepower and 262 pound-feet of torque. An eight-speed automatic transmission handles shifting duties, and while front-wheel drive is standard, all-wheel drive can be added to any model for an extra $2,000.

The V6 might seem unremarkable on paper, but it does a great job of getting the Telluride up to speed quickly, and there's plenty of midrange punch for passing -- though the engine is rather loud at full throttle. The automatic transmission works well, largely fading into the background. Downshifts could stand to be a little snappier, but most drivers won't find the transmission's action too off-putting most of the time.

At a relaxed pace through the mountains of Colorado (where else would Kia launch the Telluride?), this SUV is a solid performer. All Tellurides come with adjustable drive modes: Comfort, Sport, Eco and Smart (think: adaptive) are found on every model, but if you have all-wheel drive, Snow and Lock settings are added. Like a lot of Kias I've driven, there's a noticeable uptick in throttle and transmission response when I change to Sport mode, while the Telluride is a pretty cool-and-collected affair in the other settings. The steering doesn't offer much feedback but it's fairly direct and nicely weighted, while the SUV's overall ride quality is cool and calm, soaking up uneven pavement with aplomb.

All-wheel-drive Tellurides actually act as front-wheel-drive models most of the time, with torque being sent rearward when demanded. Sport mode adjusts the driveline to a standard 65/35 front/rear torque split, and if you go for Lock mode, the Telluride will hold a 50/50 power distribution.

Kia says the Telluride should achieve 21 miles per gallon combined with all-wheel drive, which puts it ever so slightly behind competitors like the Honda Pilot, Subaru Ascent and Toyota Highlander. Stick with front-wheel drive, and Kia says you should see 23 mpg combined.

The Telluride comes with a huge list of standard driver's aids, including blind-spot monitoring, forward collision warning with pedestrian detection, lane-departure mitigation, rear cross-traffic alert and adaptive cruise control with stop-and-go functionality. Step up to higher trim levels and you'll add a head-up display, as well as a nifty blind-spot view monitor that projects a digital display of what's beside you in the gauge cluster.

A new bit of driver assistance tech comes in the form of Kia's Highway Driving Assistant, which is a partially automated, hands-on-the-wheel system, similar to Nissan's ProPilot feature. My test route on Colorado's mountain roads doesn't allow for a thorough test of this tech -- it's meant to help you while commuting in stop-and-go traffic on the highway -- but it performs well enough during the short instances where I can activate the system.

There's a lot more tech inside, where an 8-inch touchscreen infotainment system is standard. Personally, I'd upgrade to the optional 10.2-inch infotainment suite with Apple CarPlay and Android Auto. Kia's UVO infotainment system works as well here as it does in any other model, with clearly labeled icons and quick responses to inputs.

Parents will appreciate the Telluride's cabin tech, which includes a microphone to project your voice rearward, and the option to mute the speakers in the second and third rows, to let sleeping kids snooze. Kia also fits the Telluride with standard rear-seat alert, so you don't leave part of your brood in the back of the car on accident, as well as safe-exit alert, so the little darlings don't try to open the rear doors into the path of an oncoming car or bicycle.

The Telluride is nicely appointed and stylish overall, with big, comfortable seats and optional heating and cooling in the first and second row. Cargo room is ample, with 21 cubic feet of storage space behind the third row, which expands to 46 cubic feet with the way-back bench folded. With both rows folded flat, the Telluride offers 87 cubic feet of space, which is about equal with the Subaru Ascent. Only the Volkswagen Atlas offers more cargo room -- a whopping 97 cubic feet.

The best thing about the Telluride is that all of this comes at a very competitive price: $31,690 to start. My fully loaded SX AWD tester with the optional Prestige pack comes in at $48,860, including $1,045 for destination. That's a small bargain compared to the VW Atlas, which doesn't offer nearly as many features and can easily crest $50,000. Even the well-liked, slightly cheaper Subaru Ascent can't match the Telluride's list of standard and available equipment, even if it tries to make up for it with a bevy of cup holders.

Kia's Telluride offers big, bold style and excellent value across all trims. I don't think it'll have any trouble finding its way toward the top of the midsize SUV class.