With gobs of standard safety features, improved fuel economy and a more aggressive design, Toyota is ready to tackle the Honda CR-V and Nissan Rogue.

Note: If you're looking for 2019 Toyota RAV4 information after seeing the automaker's new Super Bowl commercial featuring Antoinette "Toni" Harris, you've come to the right place. We've gotten behind the wheel of this new version of America's best-selling SUV, and have a first drive story below. If you're looking for info on the more efficient gas-electric hybrid version, Roadshow by CNET has you covered there, too. Check out our full review of the 2019 Toyota RAV4 Hybrid.

When you make America's best-selling crossover, the pressure is high to ensure its replacement doesn't lose any of its customer appeal. After an early media drive event around Monterey, California, it's clear that the 2019 Toyota RAV4 improves on its predecessor in almost every way -- even if it still probably isn't my first pick in the compact-crossover class. 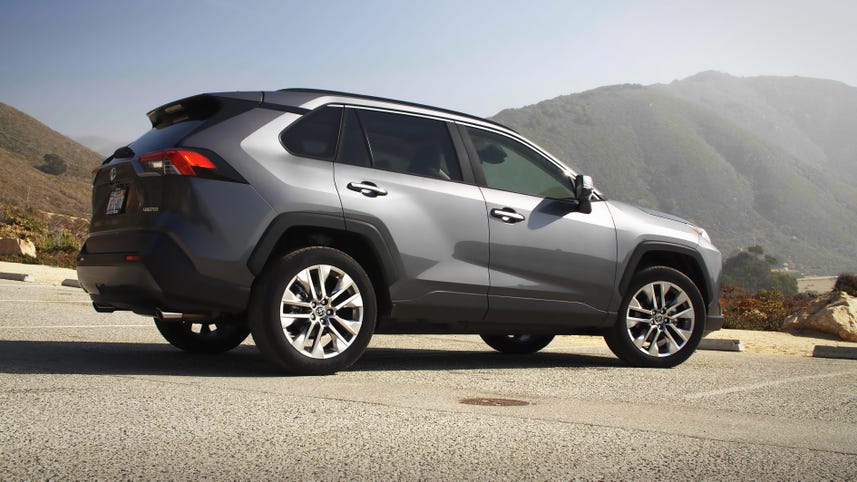 New from the ground up, the 2019 Toyota RAV4 rides on a version of the TNGA-K platform used for the newest Camry and Avalon. Briefly, Toyota promises the new platform has 57 percent better rigidity than the old RAV4's chassis, while also allowing the drivetrain to be mounted lower and thus keeping the center of gravity low.

Compared with its predecessor, the new crossover has more ground clearance but is lower in height, and has a longer wheelbase but a shorter overall length. That helps give the model tougher, more SUV-like proportions. The styling follows suit, with almost 4Runner-like cues, including a brasher grille and fascia and squared-off fender openings.

Fresher designs inside and out

In every trim level, the RAV4 looks less forgettable and a whole lot smarter than before. Nineteen-inch wheels are offered for the first time, and the color palette has more interesting shades, including various two-tone options for the Adventure grade.

The inside of the RAV4 is also a nicer place to spend time, with plenty of soft-touch materials and thoughtfully arranged controls. In typical Toyota fashion, the secondary controls are big, chunky and legible, so figuring them out is intuitive and using them with just a glance while driving is simple. My Limited tester has plush options like a panoramic sunroof, heated and cooled seats, a heated steering wheel and even a button to electrically heat and deice the windshield wipers.

The RAV4 also has five 2.1-amp USB ports and eight cupholders. A wider center console means the two front cupholders can be side by side; Toyota says customers complained about the previous arrangement, which had the cupholders separated. The center-console compartment, door pockets and glove box are only modestly sized, though there is a small shelf built into the dash above the glove box that might hold small, light items. A space ahead of the shifter can optionally be equipped with a wireless phone charging pad.

Relocated mirrors and larger rear quarter mirrors are intended to improve outward visibility. For the first time for this model, there are climate-control vents aimed at the back seat.

Back-seat space is generous enough for adults; with the driver's seat adjusted for how I sit, I've got plentiful legroom and headroom in the second row. There's very little intrusion from the center exhaust tunnel, too, so middle-seat passengers should manage OK on longer journeys.

Disappointingly, cargo volume actually declines slightly compared to previous models, even though Toyota notes the load floor is 2.5 inches longer than before. Models with a panoramic sunroof now have 37 cubic feet of space behind the back seat. Still, that's a very good figure that compares well with rivals like the Honda CR-V (37.6-39.2 cubic feet, depending on trim) and Nissan Rogue (39.3 cubic feet). The cargo floor is reversible, with one side carpeted and the other rubberized for when you're carrying dirty gear. It can be set into a lower position that provides an extra 2.2 inches of height if you need more space.

The 2019 Toyota RAV4 is a big improvement over its predecessor

Under the hood of the 2019 RAV4 is a 2.5-liter inline-four engine, using both direct and port injection. It's rated for 203 horsepower and 184 pound-feet of torque, big improvements over the prior RAV4 and among the most powerful engines in its class. An eight-speed automatic transmission is standard.

Being naturally aspirated, the four-cylinder engine delivers predictable and deliberate power across its rev range, with no hesitation and great in-gear passing performance. It lives up to chief engineer Yoshikazu Saeki's promise that he strove for natural-feeling acceleration. Actual acceleration is about on par with rival crossovers: plenty to bomb past slow-moving traffic or hustle up a hill.

Most of the time the eight-speed automatic's smooth shifts allow it to fade into the background, which is a good thing. It's not hugely amenable to sporty driving, though, and occasionally it downshifts harshly when I ask for more power. It also hunts badly when driving up a moderately steep grade of switchbacks.

The engine and transmission are actually very satisfying to drive overall, but the former is loud. It sounds rough and gravelly under even moderate acceleration, and is definitely louder and harsher on the ear than the hushed nature of some rival crossovers' engines.

Fuel economy figures have vastly improved though they don't eclipse the best in the segment. Front-wheel-drive RAV4 XLE and XLE Premium models return EPA ratings of 27 miles per gallon city and 34 mpg city, while the LE and Limited deliver 26/34 mpg. Compare that with the Honda CR-V, which returns 28/34 mpg in most trims. Still, the thriftiest 2018 RAV4 you could buy posted EPA ratings of just 23/30 mpg, so this is a big improvement.

A RAV4 Hybrid will also be offered, once again with standard electrically powered all-wheel drive. It offers ratings of 41 miles per gallon city and 37 mpg highway. We're looking forward to driving the new hybrid at a later date.

Rides better than it sounds

The new RAV4 also drives very well in other respects, displaying all the maturity and poise of other vehicles on this platform, like the new Camry. Natural-feeling steering is perfectly simple to use everywhere from city parking lots to winding coastal roads, with none of the vagueness that has afflicted some older RAV4s. The suspension settles easily after crests, dips or quick lane-change maneuvers. All told, it's a driving experience that offers a lot of confidence.

Ride quality is also very good, with the chassis dispatching bumps before I feel them -- even my tester's 19-inch wheels have relatively generous sidewalls, with 275/55-series tires (get an explanation of what those sidewall numbers mean here). Unfortunately the cabin doesn't do as good a job of muting the sound of those impacts. Every little suspension ping and knock makes itself audible, and there's abundant tire noise on every road surface. Pair that with prominent wind noise -- even at just 55-60 miles per hour on the Pacific Coast Highway -- and the RAV4 seems a couple of ticks louder than its competition. We'll want to drive the crossover on our local roads, and back-to-back with rivals, to make a full judgment, but initial impressions are this crossover could use a bit more sound deadening.

The Toyota RAV4 offers 7- or 8-inch touchscreen infotainment systems. The feature set varies wildly depending on trim level. Base models, for instance, lack HD Radio and SiriusXM satellite, while built-in navigation and an upgraded JBL sound system are available as options.

Toyota's Entune 3.0 software works just fine for phone calling, music selection and more, with prompt responses to onscreen pushes. Physical buttons around the touchscreen and real volume/tuning knobs ease operation. But the onscreen graphics are plain and the displays aren't particularly bright or crisp. The navigation maps especially look dated, though they do offer pinch-to-zoom functionality.

Standard connectivity features include Apple CarPlay, a Wi-Fi hotspot (with six months/2GB of free access before you need to pay for your own data plan) and Amazon Alexa integration. As ever, Toyota does not offer Android Auto, though says it's "investigating" adding it.

A 4.2-inch color trip computer is standard, though you can also opt for an 7-inch color version that replaces the speedometer, while the tachometer, fuel and temperature gauges remain analog. The display offers lots of information and you can swap between a digital and virtually rendered analog speedometer, but its matte-finish display washes out easily in bright sunlight.

The most interesting new safety feature is an optional camera-based rearview mirror, which works similarly to the systems we've seen in Cadillac and Nissan models. Flip the mirror down and it shows video output from a camera mounted at the top of the rear window. It allows a much wider field of view and avoids obstruction by passengers' heads or bulky cargo.

The 2019 RAV4 has only about half as many orderable configurations as the last version, which Toyota says simplifies things for customers and dealers. Still, there are six trim levels for the non-hybrid model, running from the $26,545 (with destination) LE up to the $34,545 Limited. Adding all-wheel drive to any of those options costs $1,400.

The new 2019 Adventure trim appears to be a play for the hearts and dollars of Subaru and Jeep buyers. Aesthetic improvements include a new front fascia that modestly improves the approach angle, unique 19-inch wheels, raised roof rails, chunkier overfenders, orange interior accents and rubber all-weather cargo liners. Mechanically, it uses a torque-vectoring all-wheel-drive system (also featured on the RAV4 Limited) that can shuffle torque side-to-side at the rear axle, or disconnect the rear driveshaft in low-load situations for fuel economy. Special drive modes allow the car's computers to combine that rear differential with brake application to improve snow and off-road traction. But most of all, it just looks cool. It'll cost $33,945, or a smidge less than a Limited AWD.

With its lackluster infotainment, louder-than-expected cabin and not-class-leading fuel economy, the 2019 Toyota RAV4 doesn't immediately leap to the top of what is an increasingly competitive class. A Honda CR-V feels more well-rounded and a Mazda CX-5 is livelier to drive, for instance. Nonetheless, the RAV4 is a marked improvement over last year's model and a genuinely satisfying crossover. Remarkably pleasant to drive, very functional for everyday life and generously equipped with safety technology, the 2019 Toyota RAV4 would make a great addition to anybody's garage.

Editors' note:Travel costs related to this feature were covered by the manufacturer. This is common in the auto industry, as it's far more economical to ship journalists to cars than to ship cars to journalists. While Roadshow accepts multiday vehicle loans from manufacturers in order to provide scored editorial reviews, all scored vehicle reviews are completed on our turf and on our terms.