The Toyota Highlander in showrooms today has essentially been around since 2014. Sure, it received a midcycle update a couple years ago, but it's still largely the same ol' Highlander. Against fresher competitors like the Chevrolet Traverse, Honda Pilot, Subaru Ascent and Volkswagen Atlas, Toyota's three-row stalwart has a hard time standing out.

The Highlander offers supreme ride comfort, a smooth and punchy V6 drivetrain and spacious interior accommodations for people in the first two rows.

Third-row space is only sufficient for small kids and the Entune infotainment system lacks features.

Toyota's three-row crossover still has plenty to offer, but is in need of an update.

But that doesn't mean you should overlook the Highlander. Toyota's midsize SUV has had impressive staying power in its current generation. In fact, the Highlander had its best-ever sales year in 2018, with more than 244,000 of them finding homes. It might not be the freshest three-row offering, but I can certainly see why it has appeal.

Watch this: 2019 Toyota Highlander is an old, but still solid crossover SUV
04:02 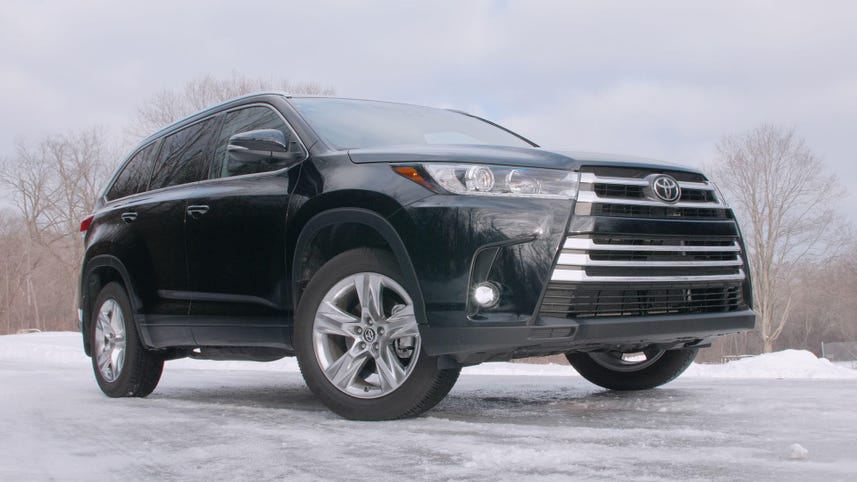 Same as it ever was

The Highlander soldiers on into 2019 with no styling tweaks, save the new LED foglights on my Limited-spec test car. Still, Toyota's midsizer wears fairly bland sheetmetal and styling. It doesn't look bad, but it certainly doesn't have much curb appeal.

Like the outside, the interior carries over unchanged and is free of visual sizzle. Instead, you get a straightforward and functional layout that's easy to work through, with large climate controls, lots of nooks and crannies to stash things and roomy accommodations for folks in the first and second rows of seats. There's also quite a bit of cargo space at your disposal, with 42 cubic feet of real estate behind the middle captain's seats that grows to nearly 83 with them flipped down.

In addition to a staid design, the interior materials are kind of meh. Likely the biggest strike against the Highlander inside is the laughable third-row accommodations. Small kids will be able to wedge themselves back there, but teenagers or shorter adults are out of the question because of the lack of legroom.

To quarterback infotainment functions, the Highlander has Toyota's familiar Entune interface in the center stack. Operation-wise, it's a solid system, with a responsive, 8-inch touchscreen that quickly swaps between all the different menus. It's intuitive to work through thanks to large, clearly labeled icons. Entering destinations into the Limited's standard navigation system is easy with route calculations getting completed in a flash. Entune also features a good, but not great 12-speaker JBL audio setup, Bluetooth, satellite radio and real-time weather information.

Sadly missing from Entune's feature menu are things like Apple CarPlay, Android Auto and a Wi-Fi hotspot -- things that all are pretty much commonplace among the Highlander's competitive set. That, along with the not very fresh and vibrant screen imagery, causes the infotainment system to really show its age.

One thing that is up to snuff is the Highlander's power port game, consisting of two 2.1-amp USB ports, a standard USB and two 12-volt outlets that are easily accessible up front. Rear passengers get another pair of 2.1-amp USBs and a two-prong 120-volt plug on the back of the center console. No phone or tablet should ever go dead onboard this Toyota.

For safety, every Highlander gets the Toyota Safety Sense suite of features that adds adaptive cruise control, forward collision warning with automatic emergency braking, lane-departure warning with lane-keep assist and automatic high beams. The Limited's safety tech list also gets bulked-up with blind-spot monitoring and rear cross-traffic alert, which are both handy features to have.

While you can get four-cylinder and hybrid-powered Highlanders, my tester is equipped with a smooth 3.5-liter V6, making a stout 295 horsepower and 263 pound-feet of torque. That works with an also-slick eight-speed automatic gearbox that sends power to all four wheels. The drivetrain combo is refined, with linear power delivery and well-timed up- and downshifts. The only small annoyance is muted throttle response at tip-in, but after that it just goes to make easy work of expressway merging and passing.

With all-wheel drive, the EPA estimates the V6-powered Highlander will return 20 miles per gallon in the city, 26 mpg on the highway and 22 mpg combined. After a week of mixed winter driving, I saw 20.2 mpg. Considering the long idle times during cold-morning start-ups, not to mention my heavier right foot, that's not too bad. But the Highlander does fall behind much of its more modern competition on the fuel economy front.

When it comes to handling behavior, comfort is the Highlander's main game. On crummy Michigan roads, the soft suspension tuning is welcome. The suspension softens blows from frost heaves and potholes to make running around town more than tolerable. Lightly weighted steering with a little play on center is also fitting of the car's calmer demeanor.

No, this Toyota isn't particularly fun to drive, with a body that moves around under braking and through turns, but it's not overly clumsy. It is, however, still plenty competent, and its 19-inch Bridgestone Dueler H/L 422 tires are fine on these broken, snowy roads. If you want something livelier to wheel around in this segment, go for the Honda Pilot or Mazda CX-9. For those who put ride quality above all else, the Highlander is your best bet.

The Highlander Limited test car pictured here costs $45,185, including $1,095 for destination. That's not totally unreasonable, but grabbing an XLE model is a slightly more budget conscious option that comes in under $42,000. With that you'll still get things like heated seats, blind-spot monitoring and rear-cross traffic alert, but will have to live without the Limited's cooled front seats, the JBL sound system and blue ambient interior lighting. Hey, $3,000 is $3,000.

After a week with the 2019 Toyota Highlander Limited, I totally understand why this old dog still sells as well as it does. The inoffensive styling, punchy V6 drivetrain and supremely comfortable ride quality are all things that surely check all the major boxes for many consumers. Spruce up the interior and give this thing a modern tech refresh, and the Highlander could easily be a segment-best pick.