The Cullinan is a machine that needs to exist, but now it's time to find out whether it answers the most important question: Is this the Rolls-Royce of SUVs?

I've just finished driving a Rolls Royce up a mountain, traversing broken, rutted trails the entire way. Even as I type that sentence now, with the memory fresh in my mind, it seems like a very strange thing to say. At 1,500 feet vertical, Wyoming's Snow King isn't exactly K2, but it is home to the steepest ski run in the continental US -- but that's a bit academic. Your average Rolls-Royce would have been left stymied by the bunny slope. Thankfully, Cullinan isn't your average Rolls-Royce.

Rolls-Royce is one of those few brands that has become so iconic over the past century and change, that to say an item is "the Rolls-Royce of..." is to say it is the best in its class. So, then, is the $325,000 Cullinan truly the Rolls-Royce of SUVs? After a day spent on- and off-road in this 6,000-pound brute of a Roller, it's certainly looking like a contender.

2019 Rolls-Royce Cullinan in the wilds of Wyoming

Few brands would have the confidence to give something as pedestrian as a vehicle chassis a name like "The Architecture of Luxury," but then this is Rolls-Royce and being evocative is what it's all about. Indeed, that what the company calls the foundation of its latest sedan, last year's Phantom VIII, and it's those same underpinnings that sit between the Cullinan's upright body and the ground.

And you can easily see that family lineage. From a styling standpoint, Cullinan looks very much like a vertically elongated Phantom -- at least in passing. Look closer, though, and you'll see the new creases, lines and cues connecting that imposing and now even taller front visage to the distinctive and wholly new rear end.

Indeed, it's the shape of the hatch at the back that's most controversial from a styling standpoint, slotting in somewhere between the pseudo-coupe trend we're seeing from many recent, luxury-minded SUVs and the full-fledged, square rear end that adorns your average big-box utility machine. Taken as a whole, the Cullinan fits very well into the current Rolls-Royce aesthetic, but perhaps lacks the innate beauty of some of the company's finer machines. 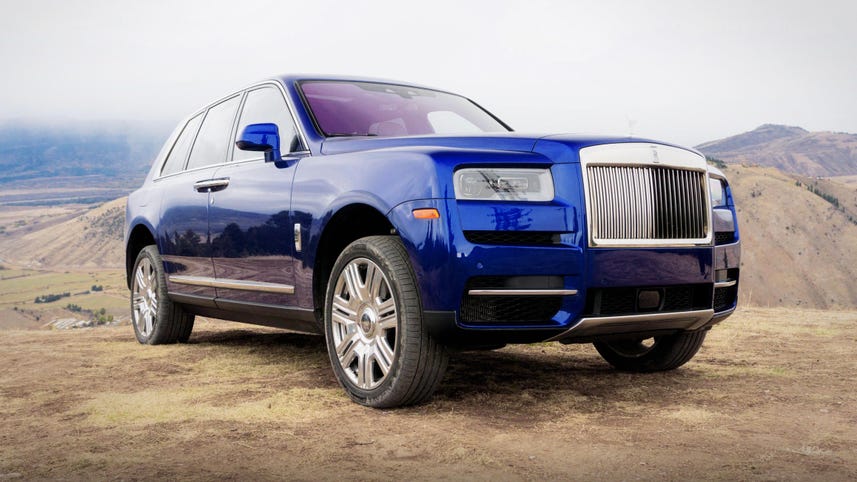 That's no matter to me, as a somewhat utilitarian visage on a Sport Utility Vehicle isn't a turn-off. Certainly, it's safe to say this is the most practical Rolls-Royce ever. The cargo space of 21 cubic feet behind the rear seats is perhaps a little limited given the size of the thing, but you can configure the car with a folding, bench rear seat if you like. Once folded, maximum capacity is 68 cubic feet.

Those are power-folding seats, of course, with buttons hidden in the suicide rear doors and on the sides of the rear cargo compartment. Those seats don't flop down or groan noisily back into place. They slowly, gracefully pivot and tuck themselves away, and there's even an integrated ramp in the rear cargo bay that rises into place, covering the unsightly gap between the floor and the back of the rear seats.

The more comfortable, if less practical, option will be the traditional configuration of separate, adjustable seats in the rear, which are spacious and plush and heated and cooled and so very, very comfortable that I'm starting to get drowsy just thinking about them. Wooden picnic shelves integrated into the front seat-backs extend at the push of a button, revealing touchscreens to access the infotainment system, including full control of media, navigation and climate.

The rear seats, then, are just as good as you'd expect on a Phantom but, as CEO Torsten Müller-Ötvös told me, 80 percent of Rolls-Royce owners drive themselves, and indeed Cullinan is intended to be a machine for driving, not just being driven in.

That run up Snow King happened just 10 minutes after climbing behind the wheel of Cullinan for the first time. I'd barely had time to get my mirrors adjusted before I was scampering over rocks, that crystal Spirit of Ecstasy emblem on the nose pointing toward the sky. Thankfully, Cullinan makes off-roading pretty easy.

Many premium SUVs present the driver with dozens of different traction modes, and indeed many SUV owners relish in the selection of just the right one. Cullinan has a single mode, accessed by a single button that says "Off-Road." Evocative? Not quite, but the mission for all Rolls-Royce cars is to be effortless, and indeed that's echoed here. Press that single button and the car girds its loins, air suspension lifting about an inch and a half, and the traction-control system becoming more aggressive. And then you just drive.

The car lacks any fancy locking differentials and doesn't offer anything so crude as a selectable low-range transfer case. But, with 627 pound-feet of torque available at just 1,600 rpm, it's quite happy to claw its way up very steep inclines at very low speeds, even on the bespoke, 22-inch, road-oriented Continental ContiSportContact 5 tires. The trails we climbed were mostly gravel, generally dry and, to be honest, wouldn't trouble most light-duty SUVs. However, few if any other vehicles could make the summit while offering that kind of comfort.

Cullinan coasted over the rocky trails and ruts with the kind of composure that some cars struggle to maintain on smooth asphalt. Yes, I could tell when I'd crested a particularly large rock, but never once did the car feel challenged, and never once did I feel stressed -- though my blood pressure may have spiked a bit when the 360-degree cameras revealed we were inches away from a sheer cliff.

The hill descent control made the trip back down just as easy, the biggest threat being a local hiker who didn't take too kindly to a sharing the trail with a dozen or so luxury machines.

Flagbearer on the road

Back on asphalt, it was time to really see how the Cullinan performed in what would be its typical playground, and from here the big SUV continued its effortless performance. Most of the roads we crossed in the Jackson Hole, Wyoming area were in very good shape, but neither stray potholes nor cattle guards could fluster the ride quality. Rolls-Royce calls it Magic Carpet, and that's not hyperbole.

Part of that comfort is thanks to another evocative bit of branding, the so-called Flagbearer system that relies on stereoscopic cameras to read the character of the road's surface, adjusting the active suspension every few milliseconds. Cullinan also borrows parent-company BMW's trick of using GPS data to help ensure the ride is always ready for the road ahead.

But that isn't to say you are completely isolated or, indeed, bored when sitting behind the wheel. The steering is slow and light, but there is some feel here, and the brakes are progressive and solid. Drew Stearne from our UK team has spent a more than his fair share of time rolling in various Rollers, and he too was impressed by the car's sense of engagement.

Most engaging, however, is that motor. With 563 horses on tap, step hard on the accelerator and the Cullinan launches forward in a way that will put a big smile on your face. The eight-speed automatic, meanwhile, is completely invisible in its operation, offering the kind of smoothness and consistency most CVTs dream of.

Meanwhile, most EVs would be jealous of just how serene the Cullinan is. It took a whopping 100 kilograms (220 pounds) of sound deadening material to make it so. Worth it.

I could probably spend 3,000 words just describing the feel of the switchgear in the Cullinan, how the vent-pulls move with remarkable heft and even the buttons feel substantial, but I won't. Suffice to say, every surface is impeccably refined.

This refinement extends into many of the car's more complicated systems. The adaptive cruise control, for example, doesn't dazzle you with endless information and warnings on the car's virtual gauges. Instead you get a simple carat on the speedometer indicating your current speed, with a little red or green line that paints the distance between your current velocity and what's been deemed legal in your current locale.

Dedicated buttons make it easy to change the follow distance, and should you stray out of your lane, the steering wheel subtly buzzes to warn you. There's no annoying chime or harsh vibration, just a little shake that seems to say "Pardon, but you may wish to apply a bit of steering angle."

The only place this breaks down somewhat is within the depths of the BMW iDrive-based infotainment system. On the surface it's clean and easy to use, but it's still pretty easy to get lost in a sea of submenus here. Thankfully, touch is now supported, so exiting out of mire is a little bit easier.

Heaters on the seats, front and rear as well as many of the surrounding surfaces, will toast your own surfaces in no time. They came in quite handy on our blustery test day. And climbing into those seats is surprisingly easy. Though tall, the Cullinan doesn't sit as high on the road as you might think. Narrow sills mean less of a stretch to climb in, so you won't get whatever filth you were just driving through on the hem of those fabulous new designer jeans you'll probably never wear again anyway.

And, if you really want to accessorize, Rolls-Royce will offer a series of so-called "Recreational Modules" to slot into the rear hatch. The simplest one has a pair of seats that fold out for tailgating at the polo grounds, or a little low-impact quail hunting. Rolls plans to offer a series of these modules to suit an owner's every desire, even one for drone racing. You know, just in case you needed another reason to want to try drone racing.

The Cullinan starts at $325,000 in the US, but when you're buying a machine like this the sky is truly the limit -- unless you actually are into drone racing, at which point you'll have to define some new set of awesome limits for yourself. That's an awful lot of money regardless of your hobbies and professions, but in this segment the concept of "value" is hard to define, so Cullinan must be judged on its own merits.

And those merits are strong. Cullinan delivers all the same poise and composure you expect from Rolls-Royce, now with much more usability and, dare I say it, practicality. This could reasonably be the one car that could take you mudding in the afternoon and then to the Met Gala that same evening -- just make sure you swing through a car wash along the way.

2019 Rolls-Royce Cullinan in the wilds of Wyoming