The Rolls-Royce Phantom is still the motorcar monarch

After more than 90 years in continuous production and entering its eighth generation the Rolls-Royce Phantom works hard to make "the best car in the world" even better.

Drew Stearne heads up the Carfection team and is the Executive Producer for CNET Cars. For over 10 years Drew has been producing video content on technology, video games and entertainment but now spends his days looking at, talking about, or indeed driving, fast cars.

Empires and nations have risen and fallen in the 92 years since the original Rolls-Royce Phantom was unveiled. Spanning 92 years, it's the longest continuously used model name in automotive history. Over that period, the fortunes of the British luxury car maker have been just as turbulent as the world around it.

In 1998 the company became what we now know as Rolls-Royce Motorcars , when Rolls' automotive side of the company became part of BMW. The first car produced in the Bavarian Motor Works era was the new Phantom, which at that point in its seventh.

Fourteen years later, a new generation of what some have called the best car in the world is rolling off the production line at Goodwood, and we had the chance to drive the Phantom VIII in the Swiss Alps to see just how much perfection could be improved upon.

Rolls-Royce Phantom VIII is the pinnacle of luxury and comfort

Although the looks are an evolution of the Phantom VII's styling, there are some striking features that immediately set the new generation apart. Up front, the Phantom VIII has the largest version of the iconic Pantheon grille ever fitted to a Rolls-Royce. Unlike its predecessors, the grille is now fully integrated into the front of the car, making it feel part of the car rather than furniture bolted to it. The front is taller and steeper, and the larger body panels at the front contribute a bold, aggressive face.

Much of that aggression softens toward the rear, though, as coach lines and creases alike fade to nothing, leaving a smoother, more elegant shape. This helps the new Phantom transition to a less bulky back end where its boat-tail-style body tapers into a less imposing rear.

Overall, simplicity and reductionism have been the watchwords to create a cleaner and less fussy exterior, whilst still looking imposing.

Watch this: The Rolls-Royce Phantom VIII: Drive or be driven?
10:05 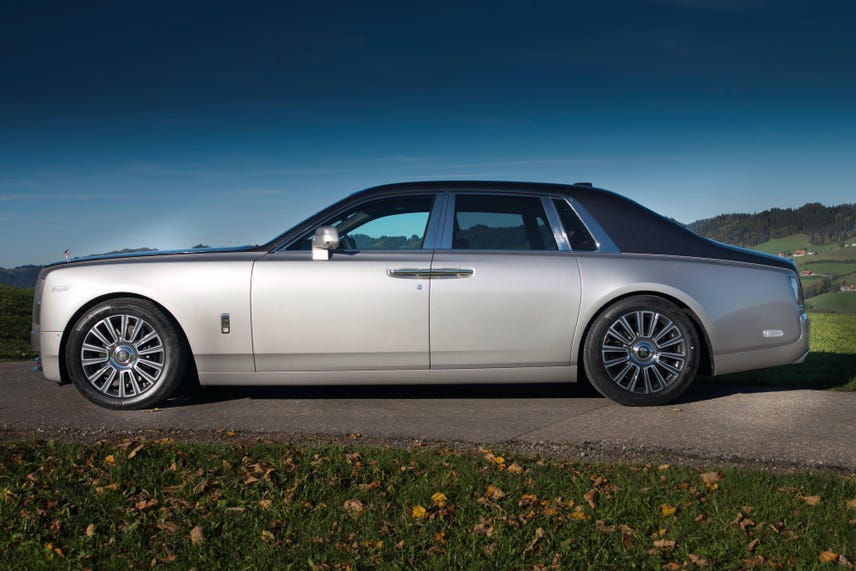 The Rolls-Royce Phantom VIII: Drive or be driven?
10:05
Watch Now

Entry into the car comes through the massive doors, the rear of which Rolls-Royce calls coach doors, but colloquially might be better known by the unfortunate moniker "suicide doors." This allows the whole car to open up like a gate to a stately home, inviting you into the sheer luxury within. Sitting in the rear seats of a Phantom is usually reserved for the hyper-rich or bluest of bloods, but you don't have to be Her Royal Highness to appreciate the lambswool carpets or the exquisitely soft leather-clad head cushions that make sure you are enveloped in soft comfort.

If there is a more comfortable place to sit in the world than the back seat of a Rolls-Royce Phantom, I haven't found it.

Once inside, the doors can be closed from a seating position with the touch of a button. Alternatively, your chauffeur can hit a button on the exterior door handle. Either control will softly bring the door in and gently seal Sir or Madam inside a cocoon of silence.

And that silence is probably the single largest focus in the Phantom, for not only is it the most comfortable place to sit, you'd struggle to find anywhere more capably of keeping the outside world at bay -- aurally, at least.

Continental was tasked with developing a tire that would create the least amount of road noise while maintaining comfort and performance, and it took over 100 prototypes to get the noise down to a level that the engineers would accept. An ultra soft rubber compound combined with a complex interior structure keep the ride smooth and the noise down where the car touches the road.

Noise deadening continues in the chassis. Improvements to the design here not only delivered a chassis 30 percent stiffer than on the previous Phantom, but lighter, too. Instead of keeping that weight saving, Rolls-Royce added in more sound-deadening materials, bringing the weight right back up to 5,643 lbs.

That extra effort to reduce noise pays dividends, with noise being reduced a further 10 percent compared to the previous Phantom, a car that was already whisper quiet.

And there is a lot of sound to keep at bay, a substantial amount of which would come from the engine. The all new 6.75-liter, twin-turbo V12 can barely be heard in the cabin as it kicks out 653 brake horsepower and 664 pound-feet of torque. The eight-speed ZF transmission ensures that the car stays in its narrow power band, which kicks in at only 1,700 rpm but starts to drop again by 2,500 rpm. Anyone who regularly takes their Phantom over that range, though, is not doing it right.

Although the weight is the same as the Phantom VII, that new engine gives the chauffeur more than 100 extra horses to play with, and 60 mph arrives in a very reasonable 5.1 seconds. Top speed is limited at 155 mph, but driving at that speed would only shorten your journey time, which seems somewhat against the point if you're buying a Phantom in the first place.

There are quicker ways to get around, especially when you have half a million dollars available to spend on a car, but if you prefer investing in the comfort of your ride rather than reducing the duration, then the Phantom is the ultimate tool for that job.

If your journey is likely to take you through the mountain passes of the Alps, as our drive did, you don't need to worry about your driver struggling to keep the soft suspension from rocking the car like a sailboat on the high seas. Although the suspension feels soft and forgiving when going over bumps on the straights, in the corners the Phantom feels firm and planted, turning perfectly level without even a hint of body roll. Even when turning tightly under braking, going downhill it still felt like your passengers wouldn't spill their champagne.

The brakes have been set up with extra travel on the pedal, allowing the driver to slow the car down extremely precisely, avoiding the dreaded head nod when coming to a standstill.

It used to take a skilled chauffeur to ensure the passengers had the full Rolls-Royce experience on roads like these. But as the average age of Rolls-Royce customer drops (it's now at 39) and more buyers want to drive their cars themselves, the Phantom had to be engineered to be as comfortable and relaxing to drive as it is to be driven.

It seems apt, then, that one of the headline new features of the Phantom VIII is a new design touch up front: The Gallery. Situated behind a single piece of glass that stretches the full width of the dash, it not only houses the instrument cluster (which is now fully digital) and the retractable infotainment screen but also a unique piece of art, commissioned by the customers to make their Phantom truly one of a kind.

Customers can approach their favourite artist or find inspiration of their own to have a unique piece of art built for the Phantom. The examples we've seen so far range from delicate silk work to intricate ceramic roses. There is quite a bit of space to play with, and the shape of the Gallery will lend itself to some interesting ideas. Options will no doubt be limitless and customers who already struggle for over a year just to pick the color of the car will have a whole new part of the buying process to agonize over.

Where this will really impact the Phantom will be in decades to come, when cars of this age will be making appearances at classic car shows. Where cars with fixed infotainment systems will look laughably dated, the Roller will not only be able to hide its screen, but present its unique dashboard making it classic car and work of art in equal measure.

It's not only the Gallery that points to the future though. The chassis that underpins the Phantom VIII will be the platform that all new Rolls-Royces will be built on. We'll next see it on the SUV we've been promised next year. Soon, Rolls-Royce will be able to boast that none of their cars are built on the bones of a BMW.

Where the parent company's guiding hand is most visible is the infotainment system, which is still based on that in BMWs. Where the Phantom VII was feeling a little long in the tooth in that regard, the Phantom VIII's system has a much crisper interface, smoother graphics and comes loaded with more connectivity and features. Modern driver aids such as BMW's adaptive cruise control and lane departure warnings are all present and correct. The infotainment systems can be controlled from the rear where, at the touch of a button, the picnic tables fold down and the large screens are revealed. The iDrive style up front is fully duplicated in the rear, allowing the passengers to have full control over entertainment and climate.

Although it is from the back seats that all Phantoms are primarily designed to be enjoyed, the Phantom VIII has stepped up the driving experience sufficiently to make this equally a driver's car. With a modern infotainment system and driver aids, the car is ready for its owner to take either the front or the rear seats. Where it seemed hard for the Phantom to improve at all, Rolls-Royce has found every last place it could and upped their game.

Is it the best car in the world? After two days or driving and being driven, it's hard to argue that it isn't.