For those looking for a bit more involvement than your average luxury SUV, the Cayenne S checks all the boxes.

The first-generation Porsche Cayenne proved that it's possible to seamlessly inject a whole lot of sports-car elements into a utility vehicle. It wasn't the first sporty luxury SUV to hit the market, but it immediately rose to the top of its field.

The 2019 Porsche Cayenne S looks good, feels great to drive and its infotainment is a tough act to beat.

It's depressingly devoid of standard equipment, there's no Android Auto and the optional Porsche Surface Coated Brakes are hard to modulate.

The Cayenne S mixes Porsche's strengths with the versatility offered by its SUV body.

Now, in its third generation, Porsche has had time to hone the Cayenne even further, and the middle-child Cayenne S is an excellent representation of the German automaker's ability to make a family vehicle fun. It might go a little too hard in the paint at times, but on the whole, the latest iteration of Cayenne is handily the automaker's best.

Simple looks outside, usable space inside

The Cayenne follows a pretty straightforward aesthetic formula: Take a sport utility vehicle and make it look like a Porsche. The third-generation Cayenne S is mighty sleek, bringing its look closer in line with other new P-cars like the refreshed Macan and the 992-generation 911. What I like the most is that it's not a try-hard: It's not riddled with complex lines or flashy protrusions. The new taillights are probably my favorite part, stretching across the liftgate, encompassing the Porsche logo inside.

My tester's only deviation from the standard Cayenne S is a $3,830 set of 21-inch alloy wheels, which are required to cover the upgraded brakes I'll talk about in a bit, and they fill the wheel wells nicely without forcing the 285/40ZR21 Pirelli P-Zero summer tires to reduce the sidewalls down to rubber bands, although they are still pretty thin.

The interior introduces a little more visual complexity, but it's not overwrought. The dashboard is devoid of unnecessary contours, and thanks to my tester's $3,750 leather interior option, every place my hand lands is soft and expensive-feeling. The dashboard stays low, which is good, because the seating position is equally low, borrowing from the sports-car playbook here. Yet, even feeling a little more tucked-in than usual behind the wheel of the Cayenne, the tall glass on every side offers suitable visibility, including blind-spot coverage.

The standard seats are supportive without being so tight that it makes some occupants uncomfortable, and in the second row, there's plenty of both legroom and headroom, even for taller passengers. The Cayenne's cargo space is on the low end of the spectrum, with its 21.7-cubic-foot storage area lagging behind the latest BMW X5 (33.9 cubic feet) and Mercedes-Benz GLE-Class (29.1 cubic feet), but it's more than sufficient for a weekend family getaway -- or, in my case, about a dozen bags of mulch.

My favorite part of the interior is the center console, but it's also the part I have the biggest gripe with. While hiding all the function buttons behind a single pane of glass definitely looks cool, the things you don't pay for are still under there, and they're very apparent with a bit of direct light. Only Porsche could figure out a way to poor-shame people buying an $80,000 car. The glass also picks up smudges, but that's an issue with most screens in most cars these days. I also appreciated the center console's extra buttons for quickly jumping to various corners of the Porsche Communication Management infotainment system.

Every four-door S model Porsche makes wields the same engine: a 2.9-liter, twin-turbocharged V6. In the Cayenne S, it's good for 434 horsepower and 406 pound-feet of torque. I'm a big fan of this engine, as there's plenty of available torque at lower rpms and it has no problem screaming its way to redline over and over. Well, it doesn't really scream -- it's actually on the quiet side -- but that's nothing Porsche's optional sports exhaust can't remedy, for a price.

The eight-speed automatic transmission is generally fault-free, working its way up through the gears with little drama in the cabin. It is, however, a little janky when the vehicle slows to a stop, jumping a little bit on downshifts between third, second and first gears.

Stopping smoothly is a problem for me in this tester, and not just because of the transmission. This Cayenne comes equipped with the $3,490 Porsche Surface Coated Brake option, which acts as a sort of middle ground between standard iron brakes and carbon-ceramics. The tungsten carbide coating on the rotors produces a unique (and cool) mirror finish as they wear in, but they are grippy, making modulation of the brake pedal surprisingly difficult. If you ever need to stop in a hurry, these boys will get the job done, but if you prioritize smoothness, I think you're better off with the standard iron setup.

The remainder of the car's driving characteristics can be summed up as sporty, but not annoyingly so. My tester rocks standard adaptive dampers, and while air suspension is an option, I found the de facto kit more than fine, even though it remained on the stiff side, no doubt helped by the not-too-thick tires. Potholes are a small concern, but most of the rough stuff stayed outside the cabin. The steering was fine, feeling responsive although lacking feedback.

The Cayenne does come with multiple driving modes, including an Individual setting that lets you pick and choose from a few different parameters. Considering the car's sort-of-anxious default state, I find that leaving everything in Normal is the best way to go. Sometimes, I can get away with Sport or Sport+ on the street, but then the engine tends to hang at higher revs too often for my taste. If I could get a sportier powertrain setting where the tachometer needle didn't live at 3,000 rpm on the street, that would be great. Using the shift paddles behind the wheels adds some more character, but they are tiring to use day in and day out.

The EPA rates the Cayenne S at 18 miles per gallon city and 23 mpg highway. I found highway fuel economy better than expected at around 25 mpg, but my city mileage was a little less hot, hovering around 15 mpg.

PCM gets better and better

The new Cayenne packs the latest generation of the company's PCM infotainment system. I'm a huge fan of its responsiveness and how quickly it boots after starting the car. The home screen is mighty capable, offering several configurable multi-tile layouts to display the most pertinent information a driver can conjure up.

Some parts of the system, like the vehicle menu, offer up so many submenus that it might appear dense, but it doesn't take long to get used to it. There's a permanent navigation bar on the left side, with some redundant buttons on the center console for quick swaps between various pages. Apple CarPlay is here, but Android Auto remains a notable omission. I do like the fact that the Cayenne S' standard equipment includes two USB ports and one 12-volt outlet in each row.

The onslaught of screen works its way into the driver's immediate line of sight, thanks to two configurable displays flanking the last physical gauge in the cluster. The left side houses the speedometer, trip meter and thermometer, while the right side can display a whole bunch of stuff from the infotainment system, including a full-screen map, individual tire pressures, average fuel economy and all that good stuff. The screens are very easy to manipulate, as they're connected to two corresponding scroll wheels on either side of the steering wheel.

On the safety front, my Cayenne S tester comes equipped with parking sensors and automatic emergency braking, but that's where the meal ticket ends. Every other bit of safety tech costs a non-negligible amount of money to throw into the mix. Blind spot monitors are $950. A surround-view camera is $1,200. Lane-keep assist is $1,300. Adaptive cruise control is $2,000. Porsche's InnoDrive, which combines lane-keep assist and adaptive cruise control for single-lane holding on the highway, a la Nissan ProPilot Assist, is $3,610, but at least you don't have to option the individual bits alongside it.

As a matter of fact, the nickel-and-diming is kind of Porsche's weakest suit at the moment. Not only do you get shamed by seeing options that you didn't equip, the options you did equip should probably come standard at this price point. $530 for front heated seats? $490 for an auto-dimming rearview mirror? What is this, 2003? 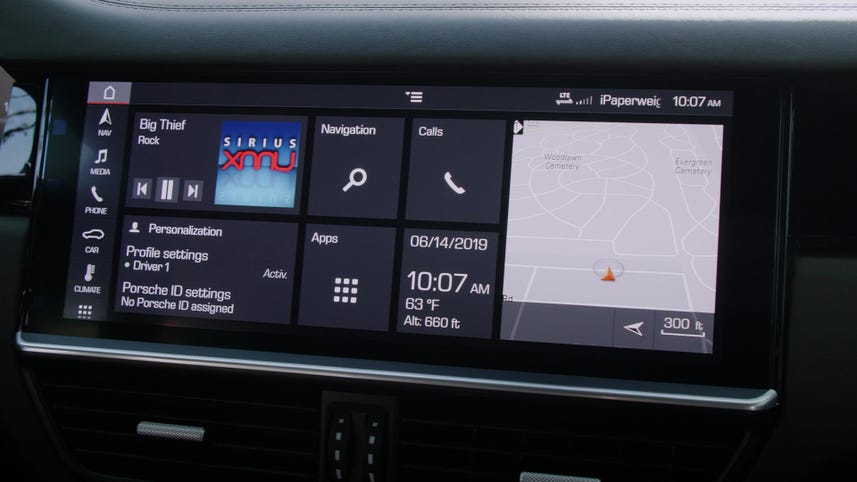 The sheer number of ways to configure every Porsche is mind-boggling, so this is going to be a dense exercise. The Cayenne S carries a base price of $82,900. A nice metallic paint color tacks on an extra $800. For the sake of ride quality, I'll stick with the stock wheels and the slightly thicker tires that come with 'em. The $3,750 leather interior is nice, but it demands seat heating for either the front ($530) or both rows ($1,060).

Thankfully, the seat-heating upgrade is already built into the $7,300 Premium Package Plus I'd equip, which also adds four-zone climate control, front-row seat ventilation, LED headlights, auto-dimming mirrors, keyless entry, a Bose surround-sound audio system, blind spot monitors and 14-way adjustable power front seats. I'll drop another $3,220 for the active exhaust, because I'm a noise junkie. For the sake of not having to sell the farm, I'll skip the safety stuff, which puts me at $99,250 after the $1,250 mandatory destination charge. These things get even more expensive in a hurry.

If you prioritize sport above all else, it'd be hard to choose any other SUV in the segment. The BMW X5 and Mercedes-Benz GLE-Class err more toward refinement than fun, unless you start throwing gobs of money to upgrade the engine, which you can also do on the Cayenne. The Audi Q7 sports a standard third row that you might not need, but you can bypass that by opting for the more expensive Audi Q8, which also packs the best infotainment system I've experienced in years.

The 2019 Porsche Cayenne S is not a hard SUV to recommend. It drives like a tall Porsche should, it looks just like the rest of its family and it's more than accommodating to passengers in both rows. The tech is good, but options can get expensive in a hurry. If you're not exactly ready to abandon a desire for sport in an effort to find a suitable family car, it's hard to go wrong with the Cayenne.