BMW keeps the new X5 close to its roots with a sporty driving feel, but it's also packed with clever tech.

By the time the 2019 X5 was announced, the 2018 X5 felt behind the times in the face of newer, prettier, more tech-forward competition. Clearly, BMW's engineers were paying attention this whole time, because the latest generation of BMW's O.G. SUV makes up for all that, resulting in a package that's not only competitive, but also easily capable of gunning for the top of the pops once more.

Driving the X5 feels rewarding, and its tech loadout is impressive.

It's bloody expensive, first-row storage is lacking and gesture control is still a gimmick.

The 2019 X5 has re-entered the battle for the best in its segment.

A new hairstyle, but the roots are showing

I want to call the 2019 X5's styling derivative, but the only design it's 'borrowing' is its own. The front end may have slightly thinner lights and a more hunkered-down look than before, but it looks largely the same as the X5 it replaces -- save for the grille, which has continued to swell like a dying star.

Things are a bit different at the rear, where BMW's new corporate taillights give the X5 a bit more dimension. I mean that literally -- the taillights have some very nice 3D characteristics that help to break up what would otherwise be monotony 'round back. My tester's 20-inch wheels add to the SUV's looks, but not without tacking an extra $600 onto the price tag.

The interior is laid out in a straightforward manner. Don't get me wrong, there are loads of buttons in here, but they're grouped together sensibly -- all the climate controls are next to each other, while everything related to driving is down by the shifter. It doesn't take me long to commit most of these positions to memory, making it easy to change settings on the fly. My major gripe here is storage -- aside from the center armrest cubby, which isn't very large, there aren't many places to cram things, which could be an issue if this is a family-first vehicle.

My tester's brown leather seats are the right amount of comfortable and supportive, offering bolstering that won't leave larger drivers feeling cramped. I'm happy with the visibility, thanks to tall windows and a rear end that's thankfully devoid of any kind of stylistic taper (that's what the X6 is for). A slightly longer wheelbase means rear-seat space is plentiful, with enough legroom for tall passengers to sit behind tall drivers. It also maximizes cargo capacity, but my favorite part of the cargo area is the clamshell tailgate, which looks properly cool every time it opens electronically.

Tech-forward, but not all of it impresses

The first tech-related bits you'll probably notice in the X5 are its screens. The standard 12.3-inch gauge display and 12.3-inch infotainment screen are both large and in charge. I am not the biggest fan of the gauge cluster's "map," which really only works when navigation directions are turned on, since the roads aren't labeled. Otherwise, I do appreciate that all the relevant information is displayed prominently on either side, and the colors and layout change depending on the mode, which is a nice touch. Sport and Comfort modes get red motifs, while Eco Pro turns the whole thing blue.

The latest iteration of BMW's iDrive works well, with a home screen that displays most of the relevant information by default. Being able to jump between touching the screen and using the physical dial below is appreciated. That said, there are loads of menus and options on there, which can be daunting at first. Changing certain things, like the optional head-up display's brightness, requires diving through several menus, which can be awfully distracting. Apple CarPlay is included, but BMW charges a subscription for it, which is stupid. You get the first year free, at least.

My tester also packs BMW's optional gesture control, a feature I think is frivolous and actually detrimental from a distraction standpoint. Yet, it's part of a $2,050 Premium Package that includes things like wireless device charging, a Wi-Fi hotspot and a surround-view camera system, so I think the package is worth it, even if you never once attempt to change the volume by swirling your finger around like Harry Potter's wand. Fans of cable-based charging will be excited to see USB-C ports in both rows.

Standard driver-assist systems abound and include automatic braking, lane-departure warning and blind spot monitoring. My tester one-ups that with the $1,700 Active Driving Assistant Pro upgrade. This brings lane-keep assist and full-speed adaptive cruise control into the fold. The system works well on the highway, keeping the X5 centered in its lane with minimal jerkiness. It's a hands-on system, and there's a clever set of lights integrated into the steering wheel that flash yellow if it doesn't detect hands on the wheel for a certain period of time. I'm generally a fan, but when I'm not using the full system, I turn off the lane-keep assist, because I find it a little too heavy-handed in its corrections during daily use. 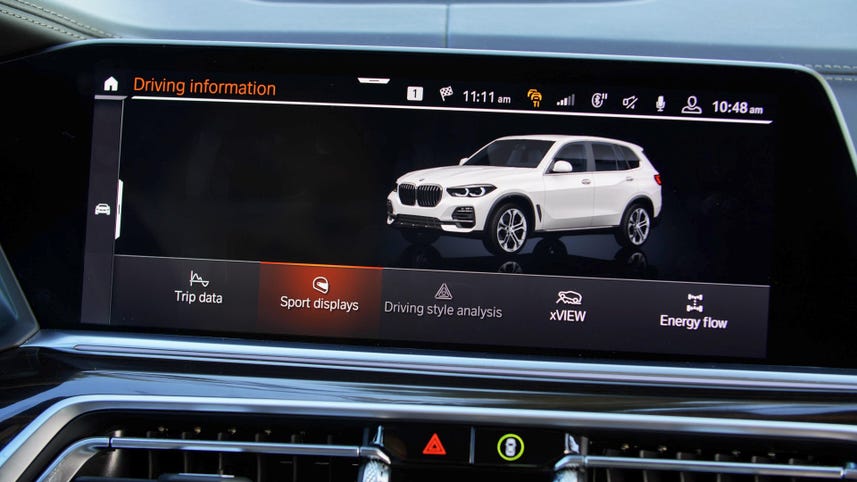 The right amount of sport

If you're after the most pliant ride in the segment, you won't find it in the X5. BMW has never been shy about making its vehicles interesting to drive, and that always comes with trade-offs. While my tester packs a $1,000 air suspension upgrade, the ride borders on stiff even with the suspension in its cushiest mode. It'll soak up the occasional pothole well enough, but if the road becomes a washboard, you're going to bounce around a fair bit. Thicker tire sidewalls might help, but the 275/45R20 Pirelli Scorpion Zero winter tires on my tester are already decently meaty.

The powertrain, on the other hand, is damn near velvety. My tester's xDrive40i trim means it carries BMW's 3.0-liter turbocharged I6 gas engine, good for 335 horsepower and 330 pound-feet of torque. It produces a nice little growl when I lean on the gas, but I appreciate its usable torque band more. The eight-speed automatic works well in conjunction with this engine, shuffling through the gears smoothly. Throwing it into Sport mode sharpens everything up, but I find the standard Comfort mode to be the best blend of thrift and shifts.

The remainder of the driving experience is equally well bolted together. The steering is direct and responsive, aligning itself with some of the sportier SUVs in the segment like the Porsche Cayenne. The throttle is easy to modulate, and in my specific case, that made for easy donuts and drifts in the snow with the stability control set to its sportier, let-you-have-a-little-fun setting. The brakes are consistent, although sprightly downshifts from the transmission below 20 miles per hour make it a little difficult to come to a stop smoothly every time.

On the fuel economy front, the EPA rates the 2019 X5 xDrive40i at 20 miles per gallon city, 26 mpg highway and 22 mpg combined. Most of my week was spent tackling annoyingly extreme inclement weather, which left me with figures 3-5 mpg lower than the estimate. However, with some clear roads, I think the EPA's numbers wouldn't be too tough to match.

My tester starts at $60,700, but BMW's pricey options send the price through the ceiling, eventually settling at $72,530 (including the $995 destination charge).

I'll start with the same trim, because V8-equipped models don't start until $75,750, which is ludicrous. Alpine White is free, and it's an excellent color, so I'll opt for that over my tester's $550 Mineral White paint job, which I thought was Alpine White anyway. Avoiding the $600 20-inch wheels affords me a bit more sidewall for a softer ride (ideally). Opting for my tester's brown leather adds another $1,450, which for some reason was discounted back down to $0 on its window sticker, but that's not the case on BMW's consumer site.

I like keyless access and four-zone climate control, so I'll stick with my tester's $1,150 Convenience Package, as well as the $2,050 Premium Package that adds a head-up display, wireless device charging, a hotspot, a surround-view camera and gesture control. I'll skip over my tester's $2,050 Executive Package, because I don't care that much about soft-close doors, window shades and remote start. However, I'll hold onto the $1,700 Driving Assistance Pro package for its solid driver's aids. In terms of individual options, I'll plunk down $1,000 for two-axle air suspension and $250 to heat both the steering wheel and the front armrests.

That leaves me with a slightly more palatable $68,595 price tag, again including destination.

The BMW X5 might be brand-new, but it has to deal with the Mercedes GLE-Class and Porsche Cayenne, both of which are also new. Slightly older competition like the Volvo XC90 and Audi Q7 are still kicking, and both are plenty enjoyable in their own rights, but I prefer the BMW's driving dynamics to the XC90 and Q7.

Had the last-generation X5 continued on through 2019, it wouldn't be in a good position. But this new one packs loads of the latest tech, and it's bolted to a chassis that's rewarding to drive, if you're into SUVs with sporting pretensions. It might not look all that different from before, but just like your parents have been telling you for decades now, it's what's on the inside that counts.