Audi's Q7 is a well-rounded SUV with the tech to impress.

We all know the phrase "jack of all trades, master of none." In trying to do everything well, some cars come up short. But not the 2018 Audi Q7.

The Q7 is fun to drive with an interior that's impressive both visually and technologically.

The third row is a bit cramped, and moving the second row to get in there requires some muscle. Both USB ports are up front.

In terms of two-and-a-half-row luxury SUVs, the Q7 is the one to beat.

Now in the third year of its second generation, the Q7 is seriously good at everything it sets out to do. It handles like an Audi, even though it's the largest one on offer. The interior is versatile and attractive, and it's loaded with the latest tech that the automaker has to offer.

If you're in the market for a larger luxury SUV and occasionally need to call upon a third row of seats, your search should start right here. Odds are, it'll probably end here, too.

Audi's current exterior design language errs toward subtlety, and the Q7 is no exception. It's not going to break necks -- heck, you might lose it in a crowded parking lot. But not every car on the planet need be a monument to excess. If you like being a little flashy, the Volvo XC90 has better curb appeal.

The Q7's interior is very well sorted. The dashboard is nice and low, which lends to excellent visibility, and you can hide the infotainment screen for an even clearer view forward. The front row is plenty comfortable, and there's a surprising amount of space in the second row even with the adjustable seats cranked all the way forward. Turn your head around, and you'll find the excellent visibility continues rearward.

The third row is where things get tricky. It's best suited for pets or children, because even with the second row slid forward, adults will be clamoring for additional head- and legroom. If you don't need it, great -- the third row disappears into the floor with two quick button presses. With all three rows up, the cargo area is good for two or three medium-size suitcases, but when only two rows are required, the sky's the limit on what you can shove back there.

Stick with the 2.0-liter

While you can outfit the Q7 with a 333-horsepower supercharged V6, all it does is reduce fuel economy and add to the base price. The base engine is a 2.0-liter turbo I4 putting out 252 horsepower and 273 pound-feet of torque, mated to standard all-wheel drive and an eight-speed automatic transmission. I find the base engine plenty sprightly, whether slogging through traffic or just blasting around town.

The ride quality is superb, thanks to smooth suspension tuning and chunky 255/60-series all-season Goodyear tires wrapped around 18-inch alloy wheels. You can fit larger wheels and tires, but thinner sidewalls lend to a less comfortable ride. The Q7's little bit of traditional European firmness keeps body roll to a minimum when you're running late and need to add a few mph to corner entry speeds.

The EPA rates the 2.0-liter Q7 at 19 mpg city and 25 mpg highway. Without putting too much effort into it, I see highway fuel economy between 25 and 26 mpg, although my heavier-than-average right foot cancels that out with city figures closer to 16 or 17.

Borrowing all the best tech

Audi's complement of in-car tech is largely the same across its entire lineup. That's a good thing in this case, because it's easy to use and it has just about everything a buyer in this segment will want.

My Q7's Premium Plus trim comes standard with navigation, Apple CarPlay, Android Auto and a wide variety of connected features like weather, traffic and even local events. Audi's MMI infotainment system is very thorough, and while it's easy to get lost in a forest of contextual menus, navigation is painless thanks to a sensible dial-and-touchpad combination. Handwriting recognition lets you write out addresses, and it's quite good at picking up on my admittedly sloppy finger work.

Virtual Cockpit is available, and it's a must-have. Part of a $2,000 package, VC mirrors the infotainment system on a configurable gauge cluster screen. It's easy to manipulate, thanks to straightforward steering wheel controls. Having the infotainment in front of my face also lets me hide the regular infotainment screen with the push of a button, which gives the interior a cleaner look and improves forward visibility. Minimizing distraction is key when there's this much tech involved, and that's what VC is best at.

My biggest gripe is one that isn't exclusive to the Q7. There are only two USB ports inside the car, and they're both located under the front row's center armrest. Unless you have extra-long cables handy, rear-seat occupants will have to make do with a pair of 12-volt outlets. For such a well-sorted family vehicle at this price point, this omission stands out in a bad way. 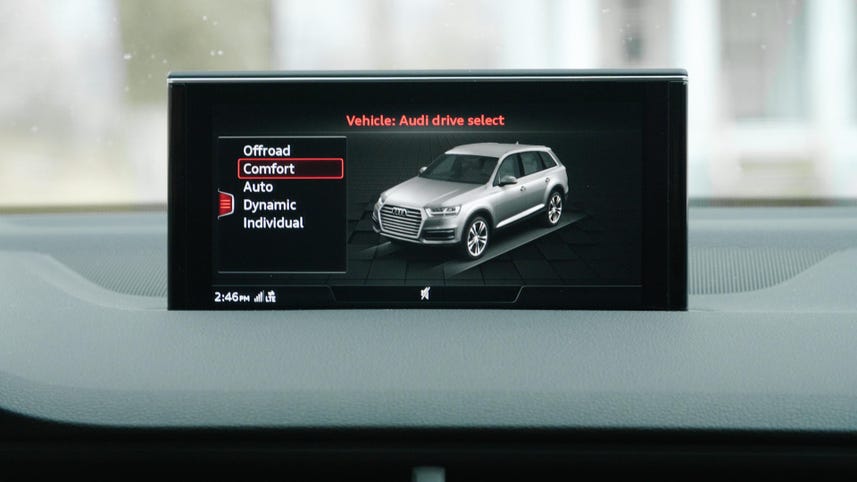 You can save a fair bit of money by avoiding the more powerful V6 engine, which is fine, because the 2.0-liter provides more than enough hustle without hitting your wallet too hard.

My preferred spec starts with the Premium Plus trim, which adds $4,000 to the $49,900 base price, but it enables me to add Virtual Cockpit, which is part of a $2,000 package that includes LED headlights and a bird's-eye view camera system. I'll toss in $2,400 for the advanced driver-aid package, as well as $650 for a heated steering wheel and heated rear seats. If all you want is autobrake, that's standard, so feel free to save a couple grand there, too.

Sticking with the no-charge white paint and a brown leather interior, that puts my Q7 at $59,925 including destination. The only major difference between my preferred spec and my tester is the $1,600 warm-weather package that adds ventilated seats and four-zone climate control.

The Audi Q7 competes in a crowded field. Its base price is below that of a similarly equipped Mercedes-Benz GLE or BMW X5, despite the Audi being much newer than either Teutonic competitor. It's about on par with the Volvo XC90, but the Acura MDX has it beat by about 3,000 buckaroos.

I consider the Volvo its closest competitor, because both cars pack a great deal of tech into a chassis that's fun without being punishing. If you want something with a bit more flash (and a 3-mpg improvement in fuel economy), the Volvo is worth a test drive, too.

But if you're on the hunt for a demure SUV that has an occasional-use third row, the Q7 is an enticing package. It thrives at any speed with just a four-cylinder engine, and its tech is on par with the best the segment has to offer. The 2018 Audi Q7 is the high-water mark in a popular segment, and it's worth your attention.