Mercedes-Benz's compact SUV gains a pricey plug-in hybrid system, but it doesn't add a whole lot of fuel economy for the effort.

Let's not bury the lede here: Benz's compact plug-in hybrid SUV, the 2019 Mercedes-Benz GLC350e 4Matic EQ Power, would not be my first choice in its small class.

The PHEV only offers about 10 miles of electric range per 2.5-hour charge and doesn't offer much more of an efficiency bump beyond that. The battery pack costs a few cubic feet of storage space. The COMAND infotainment feels outdated and confusing to use, despite a patchwork of updates.

Though there's much to like about the 2019 Mercedes-Benz GLC350e EQ Power, the plug-in hybrid doesn't add much beyond cost and complexity over the nonhybrid version.

The 2019 GLC's COMAND cabin technology is confusing, inconsistent and outdated even within Benz's own lineup. During my week of testing, I'd also be disappointed by the 350e's EQ Power plug-in hybrid powertrain which feels like an efficiency half-step that doesn't add much to the SUV's overall appeal beyond extra cost and complexity.

True, the compact GLC platform has really good bones -- it's comfortable, quiet and feels nicely luxurious -- but the details feel just dated enough to cost the GLC350e my recommendation over the strong competition.

The GLC360e's plug-in hybrid powertrain combines a 2.0-liter, turbocharged gasoline engine with an 85-kilowatt electric motor. Together, they produce a very respectable 315 horsepower and 413 pound-feet of torque, 26 more ponies and a whopping 140 more pound-feet than the standard GLC300.

Power for the electric motor is provided by a 8.7-kWh lithium-ion battery mounted beneath the rear hatch floor, which has been raised slightly to accommodate the big pack. GLC350e drivers lose about 5 cubic feet of cargo capacity behind the rear seats, but gain an EPA-estimated 10 miles of fully electric range when the battery is fully charged. Charging takes about 2.5 hours at a Level 2 charging station; plugging into a household 110-volt outlet takes a little more than twice as long. The GLC350e's charging port is hidden on the passenger corner of rear bumper, which is a weird and precarious location. It seems like the port could be easily damaged in a minor rear-end collision, making repairs for simple fender-benders more expensive than necessary.

Between that powerplant and the standard 4Matic all-wheel drive system, a single-option seven-speed automatic transmission handles gear changes. That's two fewer forward gears than the nonhybrid's 9G-Tronic transmission, a change required to cope with all of that extra torque. With so much torquey electric assistance, the gearbox's tendency to short shift and its hesitation to downshift wasn't too much of a hindrance. Overall, the GLC350e accelerates much more smoothly and confidently than the nonhybrid. It's also more quiet overall, both when cruising and when idling, which makes the PHEV feel just a tad more luxurious under most conditions.

Though the smoothness was welcome in most situations, the gearbox's slow shifting was the cause of a particularly annoying hiccup when parallel parking. If I applied the throttle too quickly after shifting, the SUV would hesitate and then lurch as it slid into gear. Giving it a "one Mississippi" or two before getting on the gas was smoother, but it's less convenient to have to wait for slow gear changes when attempting to slip quickly into a space. I detected a similar hesitation off-the-line when accelerating quickly from a stop, but less jerky or noticeable.

Beyond the initial fully electric range at 56 miles per gallon equivalent, the SUV's economy drops to 25 combined mpg during hybrid operating mode, only 1 more than nonhybrid's 24 mpg. Of course, the more often you plug in, the higher your average efficiency will be, but with only 10 miles per charge to work with, you'll either be plugging in often or not seeing much (if any) economy advantage.

The GLC350e has a few tricks up its sleeve to help it optimize efficiency. A feature called Eco Pedal adds force feedback to the gas pedal to help train the driver to accelerate more smoothly and efficiently. Stomp the gas too hard and you'll feel a slight tap-tap on your foot through the pedal. Similar taps can be felt if your speed is too high or you're following too closely. This is similar to the eco-pedal feature that I've tested in various Infiniti vehicles, only without the ability to push back against the driver's foot. I find the Benz's feedback to be much less annoying, but it can also be disabled in the vehicle's menu.

The adaptive cruise control system, if so equipped, can also use its forward-looking radar to influence the hybrid's regenerative braking system, engaging the regen rather than the brakes as the SUV approaches slower moving traffic. The navigation system can also affect the behavior of the regenerative braking and transmission shift programs to optimize performance for hills and upcoming bends in the road.

Even with those technologies bolstering the plug-in hybrid system, however, I only averaged 25.2 mpg during my testing, which admittedly included some sporty driving and many highway miles. More urban miles and more frequent charging may have helped my weeklong average, but I don't see the GLC getting anywhere near 40 to 50 mpg without recharging at both ends of my 25-mile commute into the office.

One of the largest annoyances in the GLC's cabin is the outdated dashboard tech. The standard step up is a 7-inch version of Mercedes-Benz's old COMAND infotainment, but my example featured a $2,200 upgrade to the larger 8.4-inch system with navigation. Either way you go, COMAND is old news even within Mercedes' own line up. (It's worth noting the GLC gets an updated COMAND interface for the 2020 model year.)

Watch this: The 2019 Mercedes-Benz GLC's COMAND system feels like a tech throwback
04:21 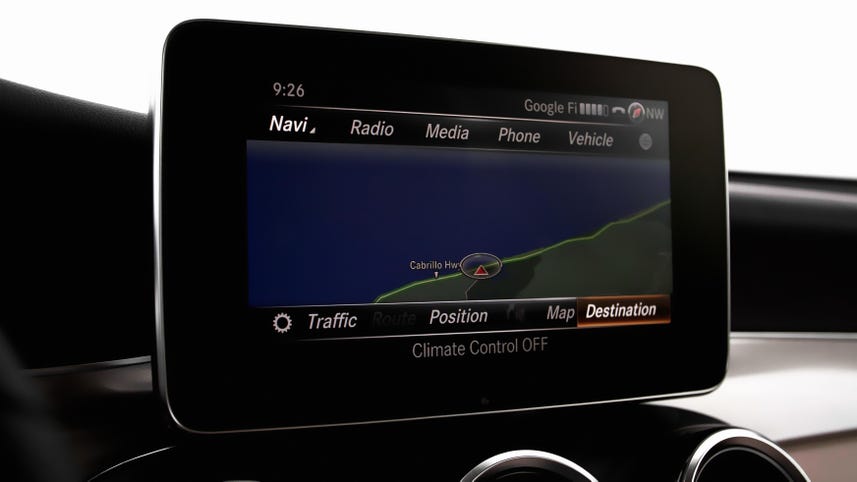 COMAND feels like decade-old software that has been patched, updated and massaged into the modern age. As a result, the interface feels cobbled together. Clicking from one area to another sometimes results in a completely different look and feel. For example, when selecting a radio band, FM, AM and satellite radio appear in a drop-down menu that pops out of the bottom bar of the interface. But when selecting a digital media source, you're taken to a completely separate screen with high-resolution icons outlining the choices. I was constantly having to readjust to how I interacted with COMAND on the road, so it never became second nature.

You interact with COMAND via a redundant combination of a touchpad and control knob on the center console. They both do exactly the same thing, only one is twisted and the other swiped and tapped. That wouldn't be so bad, but this redundant control system still manages to leave out or obfuscate some very simple controls. For example, simply skipping to the next song in a playlist requires tapping the skip button on the COMAND touchpad and then swiping to acknowledge the skip. Why there's no simple skip forward and back buttons on the steering wheel or dashboard -- like every other car on the road -- is beyond me.

In its favor, Mercedes' constant upgrading of COMAND has left it with a fairly modern feature set. There's navigation with traffic data that routes smartly, decent voice command with natural language input, a full complement of digital media sources and even a selection of app integrations along with connected features. Plus, I like that COMAND doesn't lock out address inputs when the vehicle is moving, allowing my passenger to help input search terms and addresses while rolling using COMAND's ambidextrous controller.

Android Auto and Apple CarPlay integration are also available, though they are an additional $350 upgrade that was not included on my GLC350e test car.

Whose lane is it anyway?

My GLC350e was equipped with a $2,250 driver's-aid suite that adds a healthy dose of modern safety tech to the aging GLC's bag of tricks.

There's adaptive cruise control that works at highway speeds and in stop-and-go traffic to automatically maintain a set distance behind a lead vehicle. This system's forward-looking radar also factors into precollision and automatic emergency braking systems as well as the aforementioned radar-based regenerative braking function. The Driver Assistance package also rolls in an active blind-spot monitoring system that can add steering assist to prevent merging into another vehicle and what feels like two different lane-keeping assistance technologies.

Under most conditions, the GLC operated in lane departure prevention mode. When the cameras detected that the SUV was drifting over a lane marker without signaling, the brakes opposite the offending side would slightly engage to pull the GLC back in line. I'm not a huge fan of brake intervention for lane keeping, as it can feel jerky and jarring.

When the conditions were just right, however -- clear lane markers, high enough speed and a smooth, relatively straight highway -- the GLC might also engage its active lane-keeping assistance system, which uses electric steering assist to keep the SUV centered in its lane, helping to prevent departures in the first place. What I found most annoying was that the GLC doesn't do a very good job communicating what level of lane-keeping assist is active and why. I was often confused when the steering assist would just deactivate, leaving me with just the annoying brake-departure assist.

My GLC's standard rear camera was upgraded with an optional $1,250 Parktronic Assist package. This adds proximity sensors to the front and rear of the SUV and a surround-view camera system, which aid in squeezing the SUV into parking spots without dinging the bumpers. This package also includes Benz's active parking assist, a semiautomatic parallel parking system that can steer the SUV into a roadside spot while the driver retains control of the accelerator and gear changes.

The 2019 Mercedes-Benz GLC350e 4Matic EQ Power starts at $51,645, including a $995 destination charge. My example was loaded up with $16,500 worth of options -- including about $5,110 worth of aesthetic and styling upgrades, $3,750 for COMAND and Burmester premium audio, $4,340 in driver's-aid technology upgrades and $3,300 worth of comfort upgrades like air suspension, heated seats and steering wheel as well as dual-pane glass -- bringing the as-tested price to a eyebrow-raising $68,145.

How would I spec my 2019 GLC350e? Honestly, I wouldn't, unless you can get a really good deal. The plug-in hybrid is nearly $8,000 more than a comparably equipped nonhybrid, but isn't much more efficient unless you charge it frequently. Electrified vehicle tax incentives can somewhat soften the premium price blow, but I would still recommend Volvo's XC60 T8 as an alternative plug-in hybrid SUV. The Swede offers better driver aid and safety tech, more electric range and economy, and a newer and more modern feel. It's also a hair more expensive starting at $55,300 for the plug-in model, but I feel it's worth the extra dough.

Mercedes-Benz fans still sold on the GLC should probably stick with the nonhybrid version and, even then, wait for the newly announced 2020 models -- which replace the outdated COMAND infotainment technology with the newer and much better MBUX system -- to hit dealerships before pulling the trigger.