One of the best parts about being an automotive journalist is impressing your friends with a cool ride. I drove my best gal pals to the movies in the 2018 Volvo XC60 and as we were looking for street parking, I pushed the park assist button. When the Volvo found a suitable place to park, I stopped, placed the car in reverse and let it steer itself into the parallel spot. The conversation immediately stopped and Melissa exclaimed, "Wait... did the car just park itself?"

Brakes can be a bit touchy and the Pilot Assist II semiautonomous driving technology is only available as part of a $2,200 package.

The 2018 Volvo XC60 T8 is the crossover to get for drivers who appreciate clean lines and forward-thinking technology.

The XC60 is Volvo's latest crossover, but the company has already sold over 1 million units since the model was first introduced nine years ago. This midsize offering is available in base Momentum trim, sport-focused R-Drive or deluxe Inscription. You also get your choice of three power trains, including the turbocharged T5 or the turbocharged and supercharged T6 engine. However, the plug-in T8 electric hybrid, featured here, is the power train to get.

This unique T8 engine utilizes a supercharger at lower rpms and a turbocharger at higher revs to force more air into the combustion chamber, producing more power. By supercharging first, the driver never has to wait for the turbo to spool up. Instead, power delivery is consistent no matter where the engine is in its power band. It's a pretty neat trick.

The addition of the 87-horsepower electric motor brings total system output up to 400 horsepower and 472 pound-feet of torque. For those keeping score, those numbers best the Jaguar F-Pace S and Mercedes-AMG GLC43, matching the Porsche Macan Turbo in horsepower while providing 66 pound-feet more twist.

A 10.4-kWh battery is mounted in the center tunnel, so the hybrid doesn't lose much interior space in relation to its non-hybrid counterparts. It can be charged using a standard 110v or 220v household outlet or at a 200v public charging station, reaching full-tilt boogie in about 2.5 hours. Or if you prefer to never plug the thing in, the gas engine charges the battery as well, but doing so isn't as efficient. The T8 hybrid has an EPA fuel rating of 56 MPGe or 26 mpg with premium gas. When compared with the low mid-twenties combined rating of the T5 and T6 engine, the hybrid is looking pretty darn good.

Steer Assist comes to the XC60 for 2018. If its computer detects the driver attempting an evasive maneuver to avoid hitting an object from the front, the XC60 will make the turn as effective as possible by braking the inner wheels, adding steering input and then braking the outside wheels after the maneuver to settle the chassis. I'm not crazy enough to speed toward a stationary object to test this feature for you, dear reader, so I will just say that the inclusion of this technology is part of the company's commitment to zero deaths or serious injuries in a new Volvo by 2020. 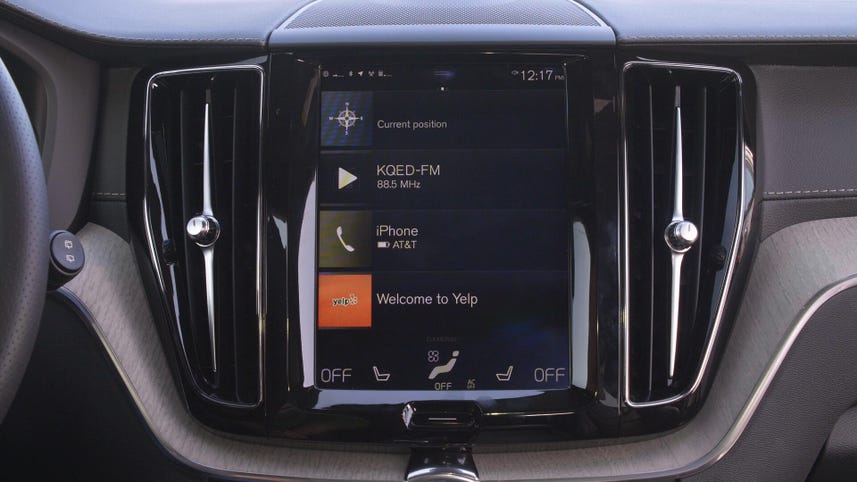 Also new this year is Oncoming Lane Mitigation, a feature using the forward-facing camera to read lane markers and a radar to detect oncoming cars. If the driver inadvertently drifts onto the wrong side of the road and into the path of an oncoming car, the XC60 can steer itself back into the correct lane. Again, I'm not brave enough to deliberately drift into oncoming traffic to test the technology, but it's one more level of safety other companies have yet to match.

Similar technology is at work in Volvo's new blind-spot monitoring system. If the driver does not heed the system's warnings and attempts to change lanes in front of a vehicle approaching from the rear, the XC60 will steer itself back into the correct lane. While I'm not comfortable barreling toward a pedestrian or driving on the wrong side of the road, I had no problem performing a slight lane drift for the sake of this review. The technology intervened gently after a visual alert and audible warning. It was neither jolting nor surprising, and is sure to be a boon in California, where motorcyclists often split lanes and seemingly appear out of nowhere.

However, it is the Pilot Assist II adaptive cruise control that really won me over. My daily commute through the Bay Area is notoriously bad, compounded by the stop-and-go suffering that is the wait at the Bay Bridge. Pilot Assist II puts all that to rest, bringing the car to a complete stop behind a lead vehicle, with a brief pause before disengaging. A quick tap on the gas or flick of the resume button gets things going again. Pilot Assist II even keeps the car centered in the lane. It's so good that I found myself digging in my bag for my phone to check email while the car did the heavy work. A warning from the dash reminded me that I was still in charge of the car and to put my damn hands on the wheel where they belong. Drivers still need to pay attention, but Pilot Assist II helps make stop-and-go driving as safe and stress-free as possible.

And don't think the Volvo is a one-trick safety pony. It's got the goods when it comes to interior tech, as well. The updated user interface debuting on the XC60's 9-inch Sensus Connect touchscreen includes tweaked menus, color-coded tiles and bigger fonts. It's easy to use and superintuitive and even works while wearing gloves, although it did seem a bit slow to boot up. I once counted nearly 15 seconds before the navigation was ready for inputs. Apple CarPlay and Android Auto are standard, but neither will take over the entire screen. This makes it easy to access the native navigation, media and Bluetooth phone while still having all your smartphone goodies nearby. 4G LTE connectivity and a WiFi hotspot are also included, but I was disappointed that a car with such a slick interface only had two USB ports, both located in the center armrest.

Behind the wheel, performance is engaging, with the aforementioned T8 power train providing strong and consistent acceleration. While all-wheel drive is standard, the system is biased toward the front wheels. The computer distributes power to the front wheels under normal driving conditions, but can send up to 50 percent of the engine's torque to the rear if necessary.

The eight-speed automatic transmission puts power down quickly and with minimal fuss. And yes, there are different driving modes. The fun is in Power mode, which turns off the electronic stability control and sets steering and braking to their most dynamic. The XC60 can power out of turns with a bit of hustle, thanks to that little instant boost of electric torque.

The default Hybrid mode is like a comfort setting, providing the best mix of fuel efficiency, performance and ride quality, but even here the ride is engaging, giving strong and consistent acceleration. Select Pure mode for maximum eco-efficiency and an all-electric range of 25 miles at speeds up to 78 miles per hour.

Slippery conditions can be met with All-Wheel Drive mode, which puts the power from the gas-powered engine to the front wheels while power from the electric motor to the rear. There's even an Off Road mode that works at low speeds on rough roads. If none of those tickles your fancy, you can dial in your own settings in the Individual mode.

My test model had the optional air-suspension system with automatic leveling and height adjustment. Cruise down the highway at 75 miles per hour and the XC60 will hunker down nearly a half inch. Increase that speed to 112 mph and the ride height lowers a tick more, all in the name of improved aerodynamics and efficiency.

The air suspension kept body roll in check, and the XC60 tucked into turns nicely on the curvy back roads of the Bay Area. I personally prefer a little more weight in the steering, but most folks should be satisfied. The regenerative brakes are a bit touchy and take some getting used to, but that's really my only complaint from behind the wheel.

There are only a few other midsize crossovers that provide as much fun behind the wheel. The lower-priced Mazda CX-5 comes to mind immediately, but it's short on technical features. The Audi Q5 is priced similarly, but is also down on power when compared with the T8. You could also look to the racy Jaguar F-Pace or to the Porsche Macan, both providing plenty of driving thrills, but sans any hybrid technology.

Considering the Pilot Assist II is part of a $2,200 package and that the T8 engine is an $11,400 premium, I'd start with the base Momentum trim for $41,500. I'd also add the Vision Package for $1,100 to get autonomous parking and blind spot monitoring. Lastly, the four-corner air suspension would add another $1,800 and if you're an audiophile, the $3,200 Bowers & Wilkins sound system is pricey but excellent, offering speakers that can mimic anything from a sound studio to a large concert hall.