Driving one of Honda's best hybrids ever will make you forget all about the Prius.

The Insight meets and beats EPA estimates with ease, its styling is on point and it's great to drive.

There are some light NVH issues when the gas engine kicks in, and Apple CarPlay and Android Auto aren't available in the base trim.

If you want the benefits of a Prius without having to look at or own one, the Insight will scratch all your itches.

Now a spiritual successor to the discontinued Civic Hybrid, and slotting into the lineup between the Civic and the Accord, the Insight takes the best parts of both cars and injects them with a dose of green cred that's hard to beat. And, unlike the latest Prius, you can look at it without your face going all Raiders of the Lost Ark. Success!

Easiest on the eyes

The Insight eschews any of the Civic's visual quirks in favor of a design that Honda believes will help expand its appeal. Given how much of a hot mess the Prius is now, and how polarizing the Civic's design can be, I think Honda made the right move. The front end borrows enough from the Clarity's design without getting too weird, and its sedan silhouette has a bit of a neat fastback shape to it.

Inside, there's the right amount of weird. My Touring-trim tester's 8-inch infotainment screen "floats," sure, but there's still an entire dashboard behind it. Changing gears requires pushing or pulling buttons instead of moving a lever, but it becomes muscle memory quickly. Otherwise, the seats are supportive and the tall-enough glass offers plenty of forward and lateral visibility -- I was wishing for a more expansive view through the rearview mirror, though.

There's no space-eating battery hump in the trunk, which means you get either 14.7 or 15.1 cubic feet of cargo space, depending on the trim -- exactly the same as the Civic Sedan. It's not as much as the Accord offers, of course, but it is voluminous enough to house a whole family's worth of groceries with room to spare for a giant bag of dog food.

Hiding under the Insight's sheet metal is a 1.5-liter Atkinson-cycle gas engine putting out 107 horsepower and 99 pound-feet of torque. Toss in two electric motors, and you've got a hybrid stew putting out a net 151 horsepower and 197 pound-feet. It might take some fiddling through modes and ignoring your lizard brain's thoughts on engine noise to make sense of it all, but once you do, it's quite rewarding.

There are four drive modes on offer: Normal, Sport, Eco and EV. Despite the acceleration penalty, I spent nearly all my time in Eco mode, which maximizes electricity-only operation. Normal mode sacrifices economy for more Civic-like acceleration. Sport, on the other hand, makes the engine rev higher for longer without producing any appreciable performance gains, and it actually uses the speakers to make the engine louder, so I found it was best ignored.

A small battery means you'll watch the charge gauge drop surprisingly fast, but having a few miles of EV-only operation without paying for a plug-in hybrid setup is still nice. The EV button lets you choose when to let the battery do its thing alone, but there's no "hold" mode to ensure you have charge when you want it. The engine will kick in with barely any feeling translating to the cabin, but since it's not connected to the wheels, the revs will rise and fall independently of vehicle movement, which takes some getting used to. At higher revs in any mode, the engine is surprisingly noisy -- but that's my only real complaint about how the Insight drives.

Whether on the road or the highway, the Insight's ride is basically the same as the Civic's -- composed without being overly stiff. It eats up potholes with aplomb, and if for some reason you want to engage in some spirited driving, it won't collapse into a discombobulated heap. Regenerative braking has three different strengths, which can be adjusted with the paddles behind the steering wheel, and I really liked the seamless transition from regenerative to friction braking.

The EPA rates the Insight Touring at 51 mpg city and 45 mpg highway, but I was able to meet and beat the base Insight's rating of 55 mpg city and 49 mpg highway with little conscious effort. Use the EV button at the right times, and you'll knock on 60 mpg's door. 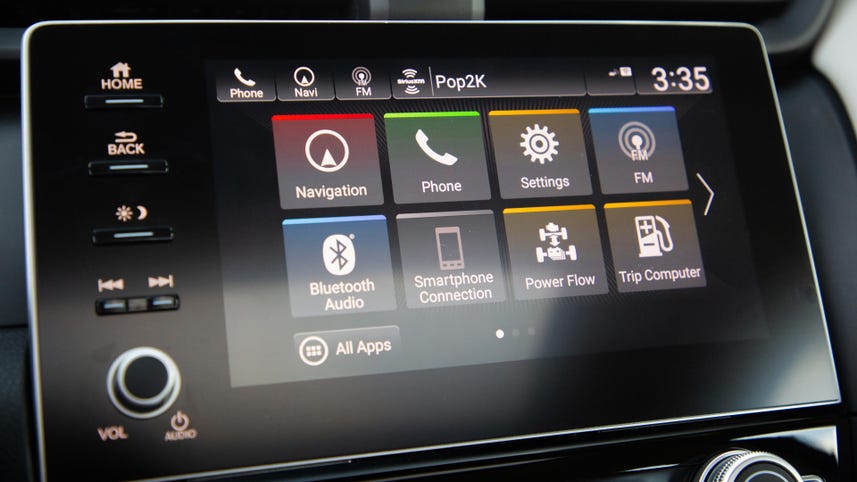 Since I was driving the top-trim Insight Touring, my tester was fitted with Honda's latest tech. But Honda is good at democratizing its tech these days, especially safety systems. All Insights get adaptive cruise control, automatic emergency braking, forward collision warning, lane-keep assist and traffic sign recognition. The only system that bothered me was lane-keep assist, which I found way too proactive, but a single button press turns it off.

Higher trims get some extra treats, like LaneWatch. Available on EX and Touring trims, LaneWatch adds a camera to the passenger-side mirror that fills the infotainment screen with what's in your blind spot as soon as you activate the turn signal. It works well thanks to its clear picture, and it can be activated separately to aid parallel parking, which I really like.

The 8-inch infotainment screen found on the EX and Touring trims offers up the latest version of Honda's infotainment system. It removes the usability and user-experience niggles that left me feeling cold about the system's previous iteration -- this new one is fast and more straightforward. Apple CarPlay and Android Auto come along for the ride, but not on the base LX trim, which feels like a value-oriented cop-out. Pony up for yet another subscription, and there's a 4G LTE Wi-Fi hotspot baked in, too.

If that's not enough screen for you, there's another one in the gauge cluster. I like that it provides all manner of vehicle information, including hybrid system operation, so I didn't have to waste infotainment-screen space on that. The power gauge that replaces a traditional tachometer made it easy for me to see when I might be leaning a bit too hard on the gas pedal, risking engaging the gas engine -- the gamification of efficiency is great for this old nerd.

Honda offers very few packages for its individual trims these days, instead using the trims themselves to split up the content. I'd stick with my tester's dark Cosmic Blue paint, which is available on all Insights. The $24,060 EX offers the best value, bundling the larger infotainment screen and creature comforts like keyless entry and LaneWatch, but I'm a sucker for automatic climate control, heated power front seats and hotspots, so I'd stick with the $28,090 Touring. That's still thousands below the average transaction price for a new car in 2018.

The Insight has a fair few competitors with various advantages and disadvantages. The Toyota Prius' top trim is more expensive than the Insight Touring, and it's ugly as sin, but EPA-estimated fuel economy is better. The Hyundai Ioniq looks like a car, and its top spec is cheaper while also offering superior economy (on paper, at least). The Kia Niro is more expensive and less efficient, but it's closer to the crossover body that everybody seems to want these days.

To be honest, the biggest cause for concern with the Insight is the market itself. Sedan sales have slipped drastically as buyers have shifted to crossovers. Gas isn't as cheap as it once was, but it's inexpensive enough to keep consumers in thirstier cars.

The 2019 Honda Insight has a long road ahead of it, but if any hybrid sedan can succeed in this market, it's this one. It looks good without being shouty, it drives comfortably, it's got plenty of family-friendly tech and it'll return damn near 60 mpg on a good day. It's one of the best sub-$30,000 cars you can buy, full stop.