The Honda Insight is back, though it has more in common with a Civic than it does with the two prior generations of its namesake.

Honda chose to revive the Insight name for a variety of reasons. The main intent is to draw connections between this new, American-assembled Insight and the first-generation model that beat the ubiquitous Toyota Prius to the US market back in 1999. In the eco community, the Insight name has some street cred.

However, the new Civic roots have advantages of their own. The new Insight is a traditional sedan, rather than some wedge-shaped hybrid hatchback. It looks like a "normal car" and Honda thinks this will grant the Insight broader appeal.

We recently took to the roads around Minneapolis, Minnesota in a fully loaded 2019 Insight Touring to see how "normal" it really is. True to its roots, Honda's little hybrid is still a little weird.

The Insight is powered by a smaller version of Honda's third-generation, two-motor hybrid system. It features a compact 1.5-liter Atkinson-cycle gasoline engine that produces 107 horsepower and 99 pound-feet of torque. But this engine doesn't actually drive the wheels most of the time. Instead, the 1.5-liter mill mostly spins a small motor-generator that recharges the Insight's 60-cell lithium-ion battery pack and juices a second, larger 129-horsepower electric propulsion motor that sends 197 pound-feet of torque to the front wheels. 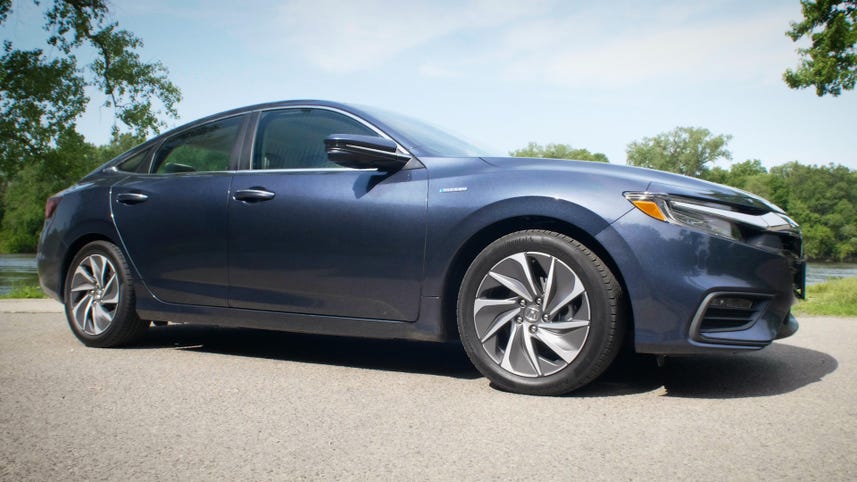 A "lock up clutch" can engage to send torque from the gasoline motor directly to the driven wheels, but only during light cruising at highway speeds or when you totally mash the throttle. Working together, total system output is stated at 151 horsepower and 197 pound-feet of torque -- not much different from what the propulsion motor does on its own.

Because the gasoline engine isn't connected to the wheels, there's an odd, CVT-like effect to the drive. You press the gas pedal and hear the engine rev, but it's out of sync with the resulting acceleration. The note just sort of climbs and then hangs discordantly. However, the e-motor is way more responsive than a traditional continuously variable transmission could ever hope to be, so you don't feel any lag between your toe on the pedal and what you sense at the seat of your pants.

In other words, around town, the Insight sounds laggy, but feels responsive and torquey like an EV. It's really nice, and also really awkward, but it doesn't take long to get used to this sensation. By the end of my second day of testing, I only noticed the engine sound weirdness under hard acceleration. Like an EV, however, the Insight tends to run out of steam at high speeds, where it can feel a tad underpowered.

Overall, the Insight returns solid performance -- especially at city speeds where the e-motor is in its element. More importantly, it promises fuel economy that's right up there with the best of its class.

The EPA estimates the 2019 Insight LX and EX models should return an impressive 55 mpg city, 49 mpg highway and 52 mpg combined. The heavier, top-level Touring model brings those numbers down slightly, to 51 city, 45 highway and 48 mpg combined. At their greenest, the Hyundai Ioniq Blue and Toyota Prius Eco just barely edge out the Insight with claims of 58 and 56 combined mpg, respectively. The Insight might not offer best-in-class numbers, but it's among the best.

The Insight features four drive modes: Normal, Sport, Econ and EV. There's not much difference between Normal and Econ -- the default setting is already pretty eco-tuned -- and EV is of limited use outside parking lots and driveways given the Insight's small battery pack. The Sport setting gives a gratifying sharpening of the throttle response, but there is a fuel economy cost. Sport mode also pipes electronically generated faux engine noise into the cabin when accelerating, which just draws attention to the aforementioned off-putting sound. This sound "enhancement" feels totally unnecessary.

Paddle shifters are standard -- odd for a car that only features two single-speed transmissions -- but they're not used to change gears. Rather, the paddles are used to toggle between three levels of regenerative braking. So as I approached a stop sign or began a coast downhill, I could fiddle the paddles to set an appropriate amount of regen. It's not quite the one-foot driving that you get with many pure EVs, but I found the feature novel and fairly useful.

2019 Honda Insight is the most efficient Civic hybrid yet

Drive modes and paddles are fun to toy with but I didn't end up needing any of that to reach the 52-mpg mark during my testing. I just left the Insight in its Normal drive mode and drove it like a normal car and good fuel economy just sort of happened -- no tricks or hypermiling necessary. That is, perhaps, the most impressive part of this whole package.

Is that you, Civic Hybrid?

Beneath the mostly unique sheetmetal, the third-generation Insight is based on the current Honda Civic. The wheelbase and track are the same, length and width are similar and both cars use the same MacPherson strut front and five-link rear suspension.

The Insight is just a little more spacious, with 97.6 cubic feet of passenger space compared to the Civic sedan's 95.0, but I think that's largely due to differing dashboard designs. More interesting is that the Insight matches the Civic's trunk space at 15.1 cubic feet. A smaller battery for this generation has allowed Honda to move the 60-cell unit out of the trunk and under the rear seats. This means there's no battery bump and that the Insight retains the same rear seat trunk pass-through as the Civic.

The Insight's engineers made a few tweaks to the Civic's platform and suspension. The cabin is quieter thanks to increased sound deadening, a retune of the rear suspension and, of course, the quieter hybrid powertrain. On the road, the Insight largely rides and handles like its sibling. The hybrid is a hair more comfortable and softer around the edges but not by much, and still manages to feel plenty nimble in most situations, despite being about 150 to 230 pounds heavier, depending on trim.

The Honda Sensing suite of driver aid technologies is standard on all Insight models, and that's great news. That means even the base LX model comes with adaptive cruise control with low-speed following, forward collision warning with collision mitigation braking, lane-keeping steering assist with road departure mitigation and traffic sign recognition. Also standard is a rear-view camera with a dynamic trajectory overlay that moves with the steering wheel to show a predictive path when reversing.

Upgrade to the EX or Touring model to add Honda's LaneWatch camera system, which fills the infotainment display with a view into the blind spot on the passenger side when the right turn signal is activated. I'm not the biggest fan of this system -- I'd rather just have a conventional always-on blind spot system with simple warning lights that work on both sides -- but I guess the camera is better than nothing.

EX and Touring models also step up to a large 8-inch HondaLink infotainment system, replacing a pretty basic 5-inch display audio setup in the LX. I love the placement of this larger display, which sort of blends the modern popped-out tablet look with a low placement on the dashboard that's easy to reach while driving. And like Honda's newest models, the Insight features a true volume knob, rather than the terrible capacitive swipe zone found in the Civic.

The infotainment software reminds me of a more colorful, easier-to-read version of Volkswagen's current cabin tech, with its large, icon-based home screen and standard Android Auto and Apple CarPlay compatibility. The similarities stop there, as the Honda system goes on to feature a high level of customization, allowing drivers to reorganize the entire home screen and to store the three most commonly used functions on a shortcut bar that's always visible at the top of the screen.

Touring models also add onboard navigation. It's pretty good software, but after the traffic system failed to account for the various roads and exits closed due to extensive construction around my Minneapolis staging area, I ended up defaulting back to the more accurate Google Maps via Android Auto to get me home in a timely manner.

The "Link" part of HondaLink refers to the onboard 4G LTE connection (subscription required) that powers a suite of native apps for audio streaming and more, as well as enabling Wi-Fi hotspot connectivity for passengers' mobile devices.

Finally, a large color display shares the instrument cluster with a traditional physical speedometer. With a scroll wheel on the steering wheel, I was able to fly through a wide range of information about economy, driver aid features, infotainment and more. No, it's not as gee-whiz as VW's full Digital Cockpit, but I was still impressed.

The powertrain sounds weird and takes some getting used to, but I really enjoyed the way the 2019 Insight felt on the road. Civic-sharp handling and a healthy dose of electric torque combine with lofty but easily achievable fuel economy estimates, all wrapped up in handsome sheetmetal.

For the most part, the Insight just blends in with other cars. There are only three or four "hybrid" badges on the exterior. There's no battery bump in the trunk. There's no weird starship eco-car design. This is a car that doesn't rub its green car cred in anyone's face. I can appreciate that, and I think buyers will, too.

The 2019 Honda Insight will start at $23,725 (including $895 destination charge) for the base LX with Honda Sensing, 55 mpg city and a passable cabin tech setup. $24,995 steps you up to the EX with the excellent 8-inch HondaLink infotainment and keyless entry: the sweet spot in the lineup for value.

The 2019 Honda Insight arrives in dealerships later this month. It may resurrect a previous moniker, but this well-rounded newcomer is a Civic Hybrid by any other name.