Active shocks, seats and smarter drivetrain tech make one of the world’s most desirable trucks even more so.

Following stints in TV news production and as a record company publicist, Chris has spent most of his entire career in automotive publishing. Mentored by "Automobile Magazine" founder David E. Davis, Jr., Paukert succeeded Davis as Editor-in-Chief of Winding Road, a pioneering e-mag, before serving as Autoblog's Executive Editor from 2008 to 2015. Chris is a Webby and Telly award-winning video producer and has been serving on the jury of the North American Car and Truck of the Year awards since 2010. He proudly joined the CNET team in mid-2015, bringing a small cache of odd, underappreciated cars with him.

When Ford launched the F-150 Raptor in late 2009, the high-speed off-roader set the pickup world on its ear. Much of the truck's inherent capability and sex appeal came from its beefy suspension -- in particular, its novel Fox Racing remote-reservoir shocks. For the second-gen 2017 Raptor, Fox was again tapped to provide the Raptor's secret sauce -- even-larger dampers featuring nine stages. Now, with the competition finally starting to catch the Raptor's scent, Ford has upgraded the 2019 model in numerous ways, including a set of new electronically adjustable Fox Live Valve shocks.

At the automaker's invitation, I headed to Erda, Utah (just outside Salt Lake City), to participate in Ford Performance Racing School's Raptor Assault program. The goal? To get the lowdown on the truck's new bouncy bits, as well as experience a battery of other updates that make one of the world's most capable vehicles even more so.

For my money, this latest Raptor update stops short of qualifying as a full refresh, because Ford hasn't touched the big brute's visuals. In fairness, however, despite the appearance of new and upgraded competitors like the 2019 Ram 1500 Rebel and 2019 GMC Sierra 1500 AT4, the automaker probably didn't need to. Even without any visual tweaks, the widebody 2019 F-150 Raptor is still one badass mudder plugger. 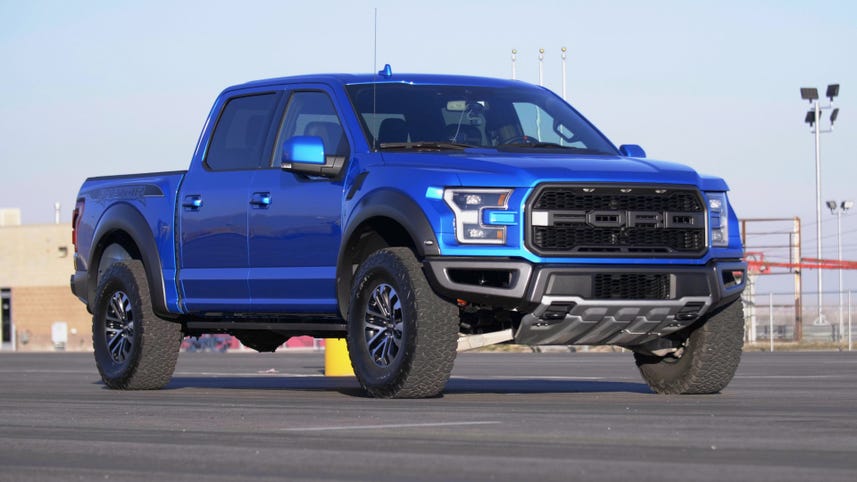 While the Raptor's generous suspension travel remains unchanged at 13 inches up front and 13.9 inches out back, new Fox Live Valve tech means that the shocks' compression rates are adjusted in real time. A network of sensors in the body and suspension feed information to a central processor that also looks at the truck's yaw and wheel-slip sensors, steering rate and pedal inputs, among other parameters. They firm up or slacken the shocks' rate of travel as appropriate in milliseconds.

As I experienced firsthand on everything from mountain ascents to bombing down rock-strewn trails and, yes, wheels-in-the-air jumping, these new shocks are The Business. While leaping in the air at speed and landing with surprising softness and control is the Raptor's trademark ability, the new Fox shocks shone most brightly while our Raptor convoy threaded its way along the desert floor at speed in the shadow of the Oquirrh Mountains.

Appreciating just how well these new shocks work almost requires two Raptors: one to be in, and one to follow behind. When you're hammering along a trail packed with baseball-to-football-sized rocks at a good clip, it's difficult to comprehend just how hard the suspension is working, because the truck's ride isolation is so good and the attitude is so level and undramatic. I couldn't help but periodically fixate on the rapidly compressing and rebounding suspension of the truck ahead of me, its Fox shocks surely being traumatized like cans of Sherwin Williams in a paint shaker.

(Pro Tip: When the trail gets blindingly dusty and you're in a convoy of trucks, you counterintuitively don't want to give in to the temptation to fall back -- it's best to nuzzle closer to the truck ahead before the dust plume has a chance to swirl and expand.)

Those new Fox shocks are also said to pay dividends on the street, too. The suspension features three modes: Normal, Off-Road and Sport, with the latter being the choice for on-road performance driving. In corners, the Live Valve tech helps curb body roll by firming up the shocks on the vehicle's outboard side and softening those on the inside. Unfortunately, my on-road time was limited, so I wasn't able to really test this aspect of their performance. That said, as with its predecessors, I've always been amazed at how daily-driver friendly the Raptor's suspension is. It is neither wallowy (as you might assume from its ride height) nor overly stiff.

Beyond those shock adjustments, the Raptor continues to make good use of its terrain mode selector, which features six different settings: Normal, Sport, Weather, Mud/Sand, Baja and Rock Crawl. Each setting optimizes not only the suspension, but also the throttle and transmission mapping, as well as the truck's locking differential and various traction and brake-management systems. It all works well, though I still wish the settings were accessible through a dedicated knob instead of having to look at a small gauge cluster readout while thumbing steering wheel controls.

Everything but the noise

Ford hasn't touched the Raptor's powertrain for 2019, meaning you still get the same twin-turbo 3.5-liter EcoBoost V6, delivering 450 horsepower and -- more importantly -- 510 pound-feet of torque from 3,500 rpm. That's a well-stocked arsenal of power, enough to hit 60 miles per hour in about 5 seconds. On the move, the mandatory 10-speed automatic dutifully avoiding excess shifts. Ford officials I spoke with couldn't highlight any transmission retuning, but the gearbox seemed to operate more thoughtfully than it did upon introduction (though it can still be occasionally lazy with kick-downs).

Fuel economy figures have not yet been released for the 2019 model-year Raptor, but there's no reason to think they will vary greatly from the current truck's 15 miles per gallon city, 18 mpg highway and 16 mpg combined. Understandably, standard four-wheel drive and all that capability aren't exactly a recipe for parsimony -- Raptors weigh upward of 5,500 pounds and have wall-like aerodynamics.

The EcoBoost's biggest deficiency is something you might expect a Raptor to have in spades: A thunderous engine and exhaust note. The high-output engine sounds somewhere between muffled and underwhelming compared to the F-150's available 5.0-liter naturally aspirated V8 (let alone the first-generation Raptor's 6.2-liter mill).

The V6's significantly beefier power and torque curves are worth the tradeoff, of course, but it's a shame that the Blue Oval hasn't fitted the Raptor with a richer-sounding exhaust. An optional active-valve setup with a derestricted path for more noise would seem to be worth investigating. Until then, there's always the aftermarket.

The other new-for-2019 mechanical feature worth noting is the advent of Trail Control, which functions like low-speed off-road cruise control. If you're familiar with hill descent control tech, this system performs the same way, although you needn't be picking your way downward in order to use it -- it works uphill and on level ground just the same. Speed can be manually selected from 1 to 20 mph, allowing the driver to focus on precisely placing the vehicle's wheels while the truck automatically metes out power and braking to each wheel as necessary.

I've sampled a similar system in recent Land Rover models, and Ford's Trail Control is just as effective. If anything, TC is so competent as to remove much of the challenge and thrill of off-roading, but it's nice to know it's there for truly hairy situations when you're in the rough stuff.

When the 13th-generation F-150 bowed for the 2015 model year, Ford suddenly seemed decidedly ahead of its crosstown rivals at General Motors and Ram. Its aluminum-intensive architecture and downsized turbocharged engines simply felt higher tech and more forward thinking. Fast-forward to present day, though, and the F-Series is actually the oldest truck of the Detroit Three, and despite a 2018 refresh, in some ways, it feels it.

Most pointedly, like all 2019 F-150 models, the Raptor's cabin is neither as refined nor as high-tech as what you can spec in Ram's excellent new 1500. This pickup's available space, material quality, switchgear feel, infotainment, center console utility and overall aesthetic just can't match that of its Auburn Hills rival.

One key change for 2019 that helps elevate the Raptor's interior? A new set of Recaro sport seats. They're a considerable improvement over the chairs in last year's model, and they do a yeoman's job of keeping driver and passenger in place when the going gets rough. (I tend to sit quite upright for better visibility, and in particular, this new design provides the amount of upper-body and shoulder support I prefer.)

That's not to say the rest of the Raptor's cabin is a penalty box -- far from it. The Sync 3 infotainment system is streets ahead of its predecessor, and being one of the more expensive trucks in the F-150 range (starting price: $52,855 plus $1,495 destination), the Raptor is outfitted quite well. However, it just isn't as nicely appointed as some of its rivals, a fact that can chafe, particularly if you're prone to optioning up your truck into the mid sixties or beyond, which is quite easy to do. (At least the Raptor has stellar resale value.)

In the end, what the Blue Oval has done is make an already outrageously capable and desirable truck even more so. Very few owners will ever approach the performance limits of the 2019 Ford F-150 Raptor, but just as it is with the legions of consumers who buy or admire six- and seven-figure supercars, that's OK.

In fact, if you view the Raptor as I do -- as a supercar among trucks -- well, it's something of a bargain.

Editors' note: Travel costs related to this feature were covered by the manufacturer. This is common in the auto industry, as it's far more economical to ship journalists to cars than to ship cars to journalists. While Roadshow accepts multi-day vehicle loans from manufacturers in order to provide scored editorial reviews, all scored vehicle reviews are completed on our turf and on our terms.