2019 Audi A6 review: Buttoned-up sedan is bursting with tech

The 2019 Audi A6 flies under the radar, but is bursting at its tailored seams with new safety, infotainment and illumination tech.

For generations, the Audi A6 has evolved humbly with reserved design, solid performance and smart technology. Now in its sixth generation, the 2019 Audi A6 still flies under the radar but packs little spark of pizzazz. When I approach the dark, unassuming sedan, its headlamps and taillights spring to life with an animated illumination dance, like a high-tech German Knight Rider.

The 2019 Audi A6 is a comfortable and luxurious sedan. MMI Touch Response is a smart evolution of Audi infotainment with a shallow learning curve. LED lighting greets owners with fun startup animations and is future-ready with HD Matrix tech.

Steering wheel controls can be a bit too easy to touch when cornering. Dynamic mode could benefit from a more sporty feel and engine sound.

The 2019 A6 matches class-leading tech and comfortable performance with a tailored design. It's attractive without attracting too much attention.

This subtle display of lighting technology is your first hint that the rest of the A6 is bursting at its tailored seams with tech, from the dashboard to the engine bay to the onboard safety systems.

Audi has also changed its naming convention for this generation. The simple displacement-based designations like "2.0T" or "3.0T Quattro" are out, replaced by new 55 TFSI and 45 TFSI badges that tell you next to nothing about what's under the hood.

The A6 55 TFSI is mechanically similar to its platform mates, the full-size A8 L luxury sedan and midsize A7 liftback. Which means that it's powered by a 3.0-liter turbocharged six-cylinder engine that makes 335 horsepower and 369 pound-feet of torque. That feels like an adequate amount of power for a vehicle of this size -- not an overwhelming force, but certainly enough oomph to make short work of interstate merges and stoplight launches.

You won't find any surprises from the rest of the powertrain: The A6 features the same seven-speed, dual-clutch transmission, Quattro all-wheel drive and 48-volt mild-hybrid system as previously paired with the 3.0-liter turbo. The A6 feels a fair bit more responsive and dynamic than the larger A8 when accelerating or changing direction, which it should, considering the 485-pound difference between the two.

The A6 45 TFSI configuration steps down to a 2.0-liter turbocharged four-cylinder engine that makes 248 horsepower and 273 pound-feet of torque, as well as a 12-volt version of the mild hybrid system. The seven-speed gearbox and Quattro all-wheel drive are kept intact, though the 45 TFSI is about a second slower to 60 miles per hour -- it takes 6.1 seconds versus the six-cylinder's 5.1. The 45 does have a slight fuel economy advantage, however -- 27 miles per gallon combined versus 25 -- and both engines are 1 or 2 mpg or two over last year's model.

The A6's handling has been tuned for a light touch. The steering wheel has a slightly artificial, isolated nature that -- while still very responsive and precise -- keeps a lot of the steering feel to itself. Personally, I'd also like a bit more audible dynamism. Even with its Drive Mode selector in its sportiest mode, I struggled to hear the engine note. That said, I enjoyed piloting the A6 over the course of a week -- especially once I'd settled into a more relaxed driving style -- and reckon many premium/luxury drivers will appreciate the quiet performance and comfortable, controlled ride.

The A6's design is a bit more vanilla than the A7, but most of its competition -- including the BMW 5 Series and Mercedes-Benz E-Class sedan -- are similarly buttoned up, which is great if you prefer to fly under the radar. Helping the A6 stand apart are three different lighting configurations. Base Premium models feature static LED headlamps with auto high beams. Midtier Premium Plus A6 models step up to flashier "Matrix-design" headlights and sweet LED taillights with a sequential illumination animation when you approach or leave the car.

Full-fat Prestige models feature HD Matrix headlamps that are capable of forming their beam around oncoming traffic and around corners, allowing high-beam levels of illumination without dazzling other drivers. HD Matrix lights aren't allowed on American roads just yet, so the tech has been software limited to conventional auto-high beam behavior. But when the law changes, Audi should be able to unlock the more precise illumination via software update.

Inside, the A6's cabin isn't as plain as it used to be, but is still rocking a minimalist design. Some may call it sparsely appointed, but I think Audi chic communicates "luxury" through high-quality materials and a reserved, high-tech aesthetic. This is sort of the opposite of, for example, a loaded E-Class' modern-baroque vibe with glossy surfaces, shiny chrome and eye-popping ambient lighting. Not better, but different. Appealing to other tastes.

I would say that the Audi A6 does have a cabin technology advantage over the E-Class. The Audi's dashboard is home to the newest generation Audi MMI Touch Response infotainment hardware and software suite.

MMI Touch Response starts with a 10.1-inch touchscreen display (or 8.8-inches in the base Premium trim) in the main position, centered in the dashboard. Audi showcases its new software with many phone interface tropes including a swipeable, icon-based main menu, a quick-launching side navigation bar with customizable shortcuts and a top status bar with quick settings. If you've ever used an Apple or Android tablet, tapping and swiping this software will soon become second nature. 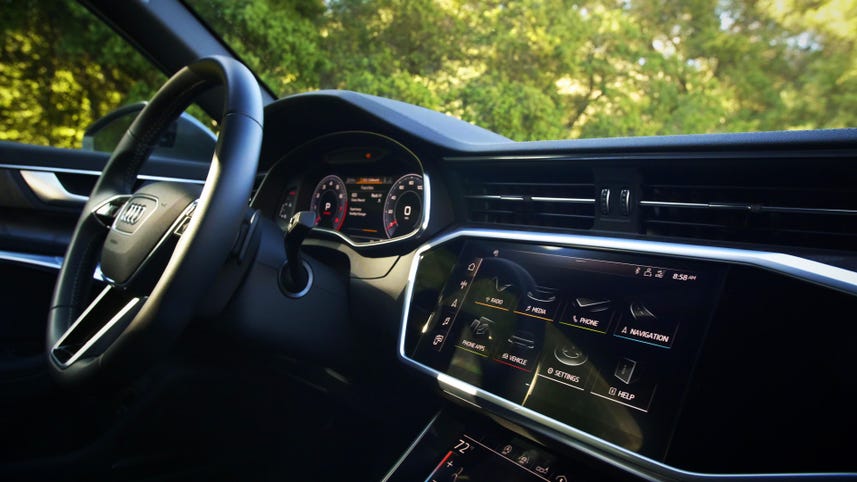 Helping drivers to go eyes-free with the touchscreen is the automaker's haptic touch response hardware, which gives audible and tactile feedback as the user's finger passes over virtual buttons on the screen. To prevent false taps, haptic touch also requires you to physically press on the screen instead of just touching, giving physical click feedback. It's something you have to feel to really understand, but the virtual interface quickly starts to feel like actual buttons, which I love.

There's no MMI controller knob for this generation. It's been replaced by an 8.6-inch secondary haptic-touch screen that sits below the main display. Here's where you'll find shortcuts for contacts, destinations, and radio presets, quick access to climate controls and -- when entering a destination or searching -- a keyboard or fingertip writing surface. To increase precision taps on this lower screen, the A6's broad, flat shift lever serves double duty as a wrist rest.

Android Auto and Apple CarPlay are standard, should you decide to bypass Audi's OEM software and bring your own tech, but neither technology is compatible with Audi's haptic feedback, reverting to standard capacitive touch when in use.

Steering wheel controls allow easy thumb access to contacts, radio and audio source presets, favorite destinations. Combined with very strong natural language voice control, Virtual Cockpit allowed me to perform the most common infotainment tasks without ever taking a hand off the steering wheel or my eyes off the road. However, the steering wheel button's placement was a bit of an ergonomic annoyance for me during my week with the A6, I kept hitting buttons with the pad of my palm when I cranked the wheel, skipping tracks or toggling the Virtual Cockpit view mid-turn.

The safety tech in the A6 is also top-tier for this already prestigious class. The automaker's Pre Sense Basic forward collision warning is standard, along with standard Pre Sense City low-speed automatic emergency braking with pedestrian detection. A full suite of advanced driving aids is available at upper trim levels or as part of the optional Driver Assistance Package. I'd like to see more standard, but checking option boxes is par for the course with German luxury brands.

The Audi A6 is available with the automaker's adaptive cruise that works all the way down to stop-and-go speeds thanks to traffic jam assist, lane-keeping steering assist, blind-spot monitoring with lane-change warnings and extended collision mitigation braking that covers turn assist, intersection assist and rear cross-traffic alerts.

Volvo's S60 springs to mind as a solid and less expensive competitor to the A6, especially for those who enjoy the Swede's minimalistic cabin. The current-generation BMW 5er also isn't bad, but didn't spark the same joy in me as the others in this highly competitive class. However, I think the 2019 Audi A6's closest competitor is the Mercedes-Benz E-Class. It's an excellent nemesis that checks many of the same boxes and feels like the A6's equal, but with its own unique flair and style.

The 2019 Audi A6 Premium 55 TFSI Quattro (why couldn't they just call it a 3.0T?) starts at $59,895 including a $995 destination charge. Four-cylinder Premium 45 models start at $55,095, while my tested Prestige 55 with Driver Assistance Package, bells and whistles tips the scales at just under $74,000 delivered. Interestingly, the A6 is about $9,000 less across the board than the similarly sized A7 liftback, making it a surprisingly good value for those looking for the best deal on the latest generation Audi tech.