2019 Audi A7 review: A powerhouse of luxury and tech

With its cosseting ride, killer style and oodles of modern tech, the 2019 Audi A7 is the sort of luxury car we'd love to drive every day.

The first-generation Audi A7 is an incredibly tough act to follow. With its svelte style, wealth of luxury and great on-road manners, the original A7 was hugely impressive.

The 2019 Audi A7 combines great style with sophisticated luxury and best-in-class infotainment technology.

It's not quite as pretty as its predecessor, and the dual-clutch transmission lacks urgency.

One of the most well-rounded luxury vehicles you can buy today, the Audi A7 hatchback is as compelling as ever.

This 2019 A7, then, has a lot riding on its shoulders. Audi put a lot of work into making its new rakish hatchback not just a better A7, but one of the best luxury cars available today, full stop. Has Audi succeeded? Oh my, yes.

A new take on a standout design

There's no denying the fact that the first-generation Audi A7 is an absolutely beautiful car; I particularly like the face-lifted 2016-2018 models. With its long, low stance and rakish roofline, the older A7 strikes an elegant pose that I even prefer to many newer models.

The 2019 A7's design has been a hot topic in the Roadshow team's Slack chat rooms, and we seem to be split on whether or not we think it's an improvement. Some angles, like the front three-quarter and side profile, offer a drop-dead gorgeous visage. Personally, I'm not as sold on the new car's rear -- particularly with those huge taillights. What's more, Audi's new design language dictates more creases and hard lines in the sheet metal, which seems to be at odds with this otherwise fluid shape.

Make no mistake, the car is still a looker. I love how it looks with the 20-inch wheels pictured here, and the futuristic song and dance the headlights and taillights do when you lock and unlock the car is really something. (Your friends will say "Oooh.") Even if you, like me, think its predecessor has the upper hand on appearance, there's no doubt this new A7 is still a standout.

Inside, Audi makes a much more obvious step forward. The cabin is as luxurious as it is visually appealing. Screens abound, and the A7's interior looks like what we were long promised from decades-old concepts previewing The Car Of The Future.

Open-pore wood, real metal inlays and soft leather surfaces all help the A7 ooze luxury, and while the seats look a bit staid in this otherwise fashion-forward cockpit, they provide lots of comfort and support. Fans of ambient lighting will appreciate the myriad color options, though at the brightest setting, I find the glow a bit distracting at night.

The A7's sloping roofline does impede rear headroom a bit compared with more traditionally shaped sedans, but its hatchback design is surprisingly functional. With the back seats upright, you'll find 24.9 cubic feet of usable space in the trunk, which is about the same as Audi's larger Q5 SUV. Plus, you can fold the seat backs for even more hauling ability. That's form and function.

Of course, the centerpiece of the A7's cabin is its impressive array of onboard tech. Like other new Audis, the A7 uses the company's MMI Touch Response infotainment system -- an interface our team likes so much, we gave it a 2019 Shift Award. I'll admit, I found this onslaught of tech a bit overwhelming at first blush, but it's actually intuitive and easy to use while driving.

I highly recommend letting reviews editor Jake Holmes walk you through the A7's infotainment system in the Tech Check video below, as it's much easier to see the system's ease of use when it's, um, actually being used. (Also, if you weren't hungry for Mexican food before watching this video, you will be after.)

To start, like all new Audis, it has a 12.3-inch Virtual Cockpit display located in front of the driver, with vital car information, as well as home screens for navigation, media and phone. The Virtual Cockpit is beautiful -- reconfigurable, too. You can choose between big or small gauges depending on your preference, and I still think the full-width Google Maps navigation display is one of the best bits of in-car tech available anywhere. 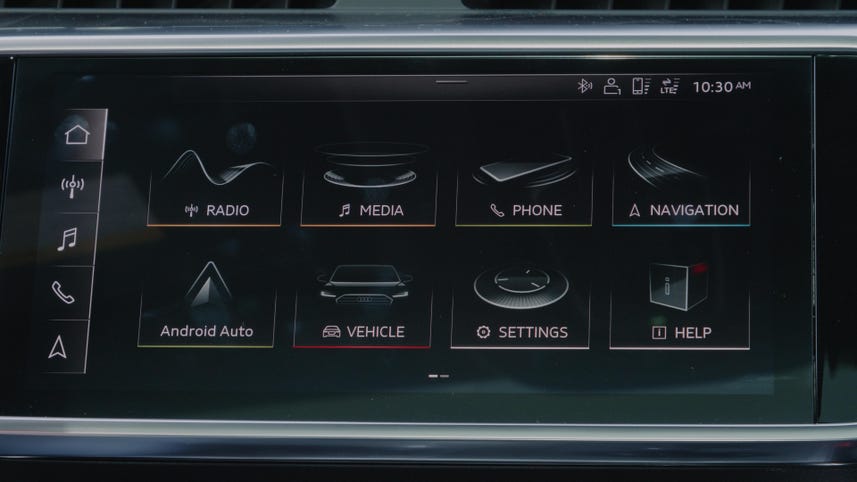 Moving to the center stack, a 10.1-inch touchscreen acts as the main MMI control interface, with hard buttons for different system functions and haptic feedback for solid engagement. Swiping and scrolling is totally smooth, with no delay in system response. The graphics set is also quite fetching, with an array of accent colors around different buttons. It's nice to see an automaker embracing a full color palette -- how many other infotainment screens rely on only a small handful of hues?

Below the 10.1-inch screen sits an 8.6-inch display, which predominantly houses the A7's climate controls, as well as a few shortcuts for the car's stop-start system, lane-keep assist, rear spoiler and other functions. You can program shortcut buttons here, too, for things like your favorite radio stations or phone contacts you ring most frequently. When you're inputting navigation data, this lower screen becomes a keyboard, or a huge writing pad -- the latter is particularly interesting, since it allows you to write out whole words, rather than some older systems where you input one letter at a time.

This is a huge amount of tech, to be sure, and that's before we get to the A7's driver assistance suite -- another Roadshow Shift Award winner. In addition to class-standard features like blind-spot monitoring and adaptive cruise control, the A7 can steer you in your lane when the ACC is running, and offers a number of safety features that not only help you avoid a crash, but keep you safer should a collision be imminent.

The A7 is a luxury and tech superstar, but it's really quite nice to drive, too. This Audi moves down the road with pure grace -- it's involving, but not trying to be overly sporty. The controls are all nicely weighted, with effortless yet responsive steering, and a nicely damped ride. Whether you're driving short distances in a city or eating up miles on the highway, the A7 is an incredibly pleasant cruiser.

Power comes from a 3.0-liter, turbocharged V6 engine, with 335 horsepower and 369 pound-feet of torque. The engine uses a 48-volt mild-hybrid system, too, which allows for more liberal use of the smooth-acting stop-start system (which can even turn the engine off before you've come to a complete stop) in order to improve efficiency. EPA fuel economy ratings of 22 miles per gallon city, 29 mpg highway and 25 mpg combined are appropriate for a car of this power and size, and that's with standard Quattro all-wheel drive along for the ride, too.

The 3.0-liter V6 is a powerful engine, but it doesn't brag about its capabilities. Hitting 60 miles per hour takes a scant 5.2 seconds, but it doesn't involve a whole lot of drama. The A7 scoots forward with elegant poise, and with hardly any noise from the engine or exhaust. Midrange torque is ample for passing, though the seven-speed dual-clutch transmission often needs a moment to wake up before dispatching quick shifts.

The 2019 Audi A7 is the sort of luxury car I'd want to drive all day, in all seasons. It can weather a nasty Detroit snowstorm with aplomb, offering cool and confident capability for winter's worst. But on dry roads under sunny skies, the A7 is nothing short of luxurious and smooth. If you're interested in a sportier experience, hold out for the upcoming S7 and RS7 models, which will likely arrive later this year.

As desirable as ever

Overall, the Audi A7 is an incredibly well-rounded luxury car. It offers best-in-class tech in a comfortable and quiet environment, and is truly enjoyable to drive day-to-day. Its $68,000 starting price undercuts traditional competitors like the BMW 6 Series Gran Coupe and Mercedes-Benz CLS, though models loaded up with all the bells and whistles will wear price tags closer to the roughly $83,000 of the car you see here.

Eighty grand isn't an insignificant amount of money, but it doesn't feel like a huge demand for a car of this caliber. Indeed, with its impressive array of technology, solid driving manners, usable utility and sophisticated style, the A7 continues to be one of the most desirable premium cars on sale today. 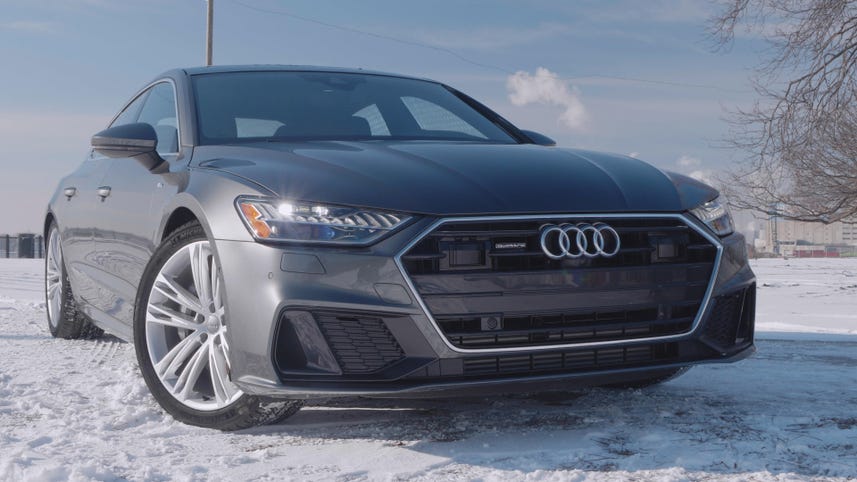 2019 Audi A7 is one of the most well-rounded luxury cars available
6:19
Watch Now