Aston Martin's latest is a 715-horsepower bruiser with the kind of looks and performance to make even the most practical of car buyers a little weak in the knees.

Modern culture loves a good reboot, and Aston Martin is in the throes of a pretty epic one. It all started with the DB11, the first episode in a modern retooling of a beloved franchise, sporting generations of passionate fans the likes of which any Marvel Cinematic Universe property would kill for. After the V12 DB11 came the predictable V8 and convertible variations on the theme, followed by the smaller, lighter and harder-edged Vantage. Next, Aston really turned the DB11 up to 11 with the racier DB11 AMR.

Where to go from there? Bigger, badder and faster, of course. Welcome to the $304,995 Aston Martin DBS Superleggera, a car with with the pedigree and beauty to make even the most practical of car buyers a little weak in the knees. It has the power, too: 715 horses worth. But does it have the overall poise and performance to compete with the likes of Ferrari and Bentley? I headed to Bavaria to find out.

Watch this: Aston Martin DBS Superleggera has gorgeous looks and mountains of torque
08:32 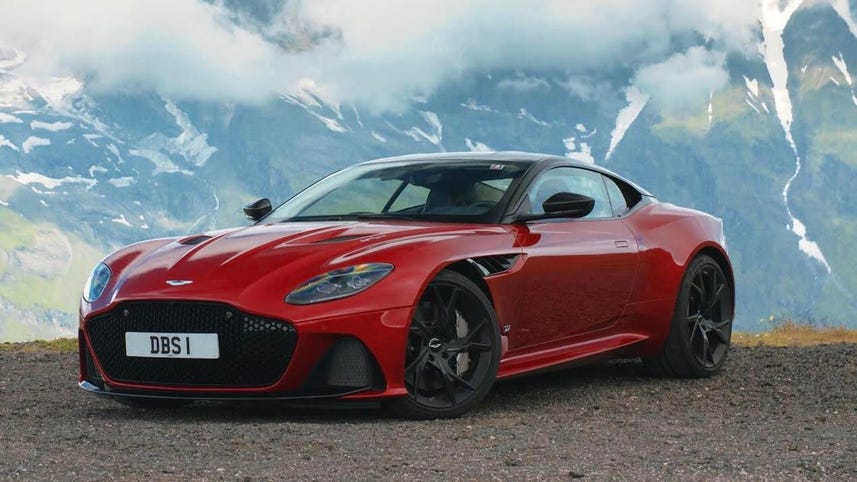 The DBS Superleggera is the latest adaptation of the formula that made the DB11 so successful, including the same basic structure and suspension and even the same 5.2-liter, twin-turbo V12 spinning an eight-speed automatic transmission. This car, then, shares more than a little DNA with the DB11, but that's not to say that nothing has changed.

That's a new ZF transmission in the rear, needed to cope with the massive 663 pound-feet of torque -- 150 more than the DB11, and 130 more than the Ferrari 812 Superfast. Even that new box isn't enough, with the DBS suffering the ignominy of a one-third torque cut in first gear and roughly 12 percent in second. The sprint from 0 to 62 miles per hour clicks by in just 3.4 seconds, a half-second faster than DB11, but a little slower than you might think given that power.

That increase in performance comes exclusively thanks to increased boost, almost 3 PSI (0.2 bar) worth, plus a new exhaust. Aston didn't even throw in a token piston upgrade or any other revision beyond software to boost the V12 up to the stunning figures of 663 lb-ft of torque and 715 horsepower. However, more power means more heat, so cooling was vastly upgraded to compensate, something DB11 owners should think about before calling their friendly local tuners.

A revised suspension tune split the difference between the pliant DB11 and the vicious Vantage, though the overall configuration has more in common with the former than the latter. Carbon ceramic brakes all-round are standard and there's plenty more carbon to be found throughout the car, resulting in a 159 pound weight reduction over the DB11 if you spec out the optional titanium exhaust and lithium-ion battery. The Superleggera badge on the snout is more than marketing, then. That's 3,732 pounds if you're counting, with a 51:49 front:rear weight distribution.

As most of the underpinnings are shared between DBS and DB11, it's no surprise that the styling is familial, too. While the doors and glass are actually the same between the two cars, everything else transforms this new Aston into something else. While the DB11 is a pretty car, the DBS Superleggera is a sultry one, with flares and bulges in all the right places to announce its abilities and its intentions.
It starts at the front with a nose that flows in much the same way as the DB11, now opened up to provide more airflow. The hood features vast perforations, giving an aggressive first impression. Aston Martin's traditional, horizontal side-strake behind the front wheels was replaced here with a taller series of gills designed to stabilize airflow around the side of the car.

While the DB11 is an pretty car, the DBS Superleggera is a sultry one, more buxom with flares and bulges in all the right places to announce its abilities and its intentions.

Toward the rear, the DBS features the DB11's C-pillar intakes, again feeding air through the rear of the car and ducting it upward at the trailing edge of the bumper to create downforce. However, on DBS a fixed aerodynamic lip bolsters that airflow. This tweak, plus a double-diffuser mounted below the rear bumper and numerous other massages, create a combined 400 pounds of downforce at maximum speed, the most of any production Aston Martin.

All that means it'll stay planted at speed and cool at the limit, but rest assured that it'll always turn heads, even when standing still.

The Alps of Bavaria and Austria offer some of the most spectacular scenery on the planet. For those more interested in driving, the roads threading between those ominous peaks twist and turn in some very compelling ways. Unfortunately, it isn't just automotive journalists drawn to this global tourist destination. Indeed, most of my drive was stuck sitting behind the usual European collection of slow-moving RVs and tiny rentals buzzing from bakery to trailhead.

The crowds may spoil the drive, but they certainly eliminated any doubt about the kind of draw the DB11 creates. Heads were turned and fingers pointed in every one of the little towns I idled through. I quickly lost count of the number of smartphone snaps that were captured of me behind the wheel of this long, low, crimson missile. A barking and crackling of the exhaust surely helped, but rest assured that the DBS Superleggera is a car with world-class presence.

That traffic also gave me plenty of opportunity to sample what is, in some ways, the hardest part of a car like this: Comfort. Making a brutally fast car is hardly easy, but making a brutally fast car comfortable and reassuring to drive is a serious challenge. In this regard Aston Martin has mostly succeeded. The DBS offers the DB11's heated and cooled seating that's both supportive and pliant, top-shelf interior materials and a B&O sound system that will disappoint none. If there's a fault here, it's that the interior really feels no more special than the DB11, a stark contrast to the exterior.

Steering is light and the overall drive experience is far from fatiguing, but those carbon ceramic brakes are a bit touchy when working through casual traffic. Worse, their squeals began to grate on my nerves after awhile. The DB11 is still the better tourer, if only by a hair, but the DBS is intended for those looking for more engagement, and when the traffic finally cleared I was able to confirm that it delivers.

Though suspension is as ever composed, even on its sportiest setting, the DBS slings through corners with amazing liveliness. The nose feels incredibly eager and while the 21-inch Pirelli P Zero tires offer astounding levels of grip, even the meat of a 305 section-width rear isn't enough to cope with all that power. Those with anything but a feather-light application of the right pedal will be feeling the traction control a lot, and it is far from subtle.

You'll also be feeling that torque cut in the first few gears. Meant to save the transmission from spinning itself into an early grave, torque is cut by 150 foot-pounds in first gear when you're in Sport+ mode, the most aggressive. However, if you're down in GT mode, the most relaxed, you lose a whopping 200. In second gear you get 530 pound-feet, and it's not until third gear that you get full power -- and then only if you're in Sport+.

That means in GT mode you're actually limited to 463 ft-lbs, and while that's no small amount, it actually feels a bit sluggish, especially as you approach the upper reaches of the rev band. Impromptu bursts of acceleration require toggling from GT through Sport and into Sport+, which is still an unfortunately slow process, requiring about one second per press of the wheel-mounted mode toggles. (Something like Porsche's Sport Response button, which gives you 20 seconds of full-beans at the press of a button, would help a lot. )

But, in third gear and in the right drivetrain mode, the thrust here is nothing short of epic. Truly face-mangling amounts of force will press you back into the seat and hard. With maximum power available in all the rest of the five gears, you're incredibly likely to run out of road before you run out of speed. In the right environment, though, the DBS can hit a whopping 211 mph.

The Aston Martin DBS Superleggera is stunning to behold and, while it has a few foibles, a monster performer that more than lives up to the look. The DB11 is perhaps still a slightly more comfortable tourer and the Vantage the more purposeful experience, but the outrageous speed of the DBS truly sets it apart from its supercar siblings.

And what about the competition from Ferrari? The electronics and driver assists of the Aston are a bit rudimentary by comparison to what's coming out of Maranello these days, and while I didn't test the DBS on a closed circuit I'd expect the 812 Superfast to be, well, faster. It'd probably be the more exhilarating choice, too. However, when it comes to the more nuanced aspects of a Super Grand Tourer, dominating not only those thrilling sections of road but also hurtling you across those long stretches in between -- and turning heads all along the way -- the DBS Superleggera is a frightful, purposeful and beautiful beast.