You can't convince everyone to buy a wagon, but you can convince wagon buyers to spring for the V90.

For most, the idea of driving a station wagon evokes thoughts of the Wagon Queen Family Truckster and the horrors of pre-smartphone family vacations. It's quite the hard sell, given America's absolute obsession with crossovers. It's like trying to teach a dog to meow.

The V90 has the best looks in its segment, it's well sorted on the road and it's loaded with tech meant to make your life easier.

The transmission occasionally exhibits rough shifts, the engine note is uninspired and tires will go a long way in shaping your ride experience, even with optional air suspension.

The expensive station wagon segment isn't very big, but the V90 is worth a long look.

Despite this, wagons are still kicking around. On the affordable side, you have the Volkswagen Golf Sportwagen and, um, that's about it at the moment. But, if you're looking to spend north of $50,000 on a station wagon, the possibilities expand to Brobdingnagian proportions -- you can choose from three: The Mercedes-Benz E-Class, Jaguar XF Sportbrake and this Volvo V90.

Provided you can put down the crossover Kool-Aid for a moment, you'll find that the V90 impresses with its great looks, solid driving dynamics and ample complement of the latest tech for both driver and passengers. At the absolute minimum, this wagon will help you stand out from the cookie-cutter crossover contingent.

Easy on the eyes -- real easy

Volvo's previous design language was a bit dowdy, but the latest generation of vehicles has turned its lineup toward the light. The new design is futuristic enough, without a bunch of complicated creases. The side, for example, has a strong character line that runs the length of the bodywork, which is enough to give it some strength without overdoing it.

The best parts of the car, though, are its front and rear. Volvo's "Thor's Hammer" headlights remain some of the prettiest in the industry, and our tester's R-Design package removes some of the chrome bits present on the other trim, Inscription. It's a clean look that makes good use of LEDs, again, without going overboard. It's aggressive, but not so much that it looks like you're trying to show off.

I think it's easily the best-looking car in the segment. To my eyes, Benz's E-Class Estate has an annoying chrome strip that runs the width of the rear end and looks like a unibrow. The XF Sportbrake is sharp, but I think Jaguar's design language doesn't feel as fresh as Volvo's.

It's the same story inside. Volvo has stepped its game up in a big way. Our tester's interior was very well sorted, with a level of quality traditionally reserved for Germans. Everything looks and feels nice, with leather covering the center console, instrument panel (as an option) and door panels. I'd probably skip the $800 carbon fiber overlay option, though -- it's a bit much. The seats were supportive for hours-long drives, whether on the highway or back roads.

The V90 is big, and thus occupants will find plenty of space to get comfy in both rows. The cargo area was spacious enough for a week's worth of groceries, with room to spare for a Target run and a trip to the garden center.

The arrangement of the tech in the Volvo V90 takes some getting used to, but it's easy to commit to memory. Everything happens through the 9-inch Sensus Connect touchscreen, which sports a vertical orientation, unlike its rivals. This allows a bunch of information to be displayed at once, which can be great at times and a little overwhelming at others.

The home screen contains tiles for your most frequently used features, whether it's navigation, media or Apple CarPlay and Android Auto. Swipe to the left, and you can access nearly every feature and setting. You can turn safety systems on and off individually, and it's also where you can turn on the surround-view camera, which displays the area around the vehicle with excellent clarity.

Swipe to the right, and you get your applications. The car includes built-in streaming options, like Spotify, which can run on the car's built-in 4G LTE antenna. It's nice that you don't have to use your phone's internet to access these features. The system can also access local weather reports, Yelp! reviews and it can even record and send small voice messages.

The V90's optional Bowers & Wilkins stereo is a hefty $3,200, but it's worth it. Fidelity is top-notch, coming close to Mercedes-Benz's excellent optional Burmester audio. The system can be set up to make it sound like you're in a concert hall, which is weird for talk radio, but damn near perfect in almost every other instance.

The climate system, too, is touch-based. That makes it tougher to change on the go, especially if you just want to raise or lower the temperature by a degree or two. A few extra switches for these functions would go a long way, instead of limiting most every physical switch to audio controls. 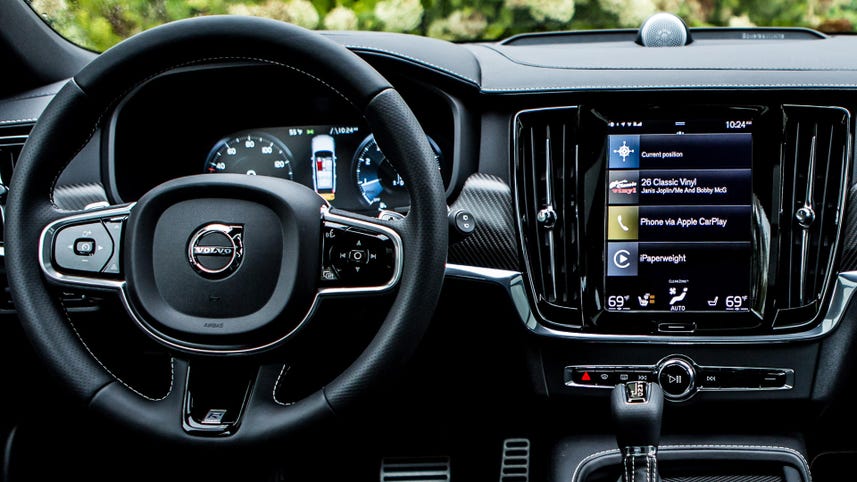 Stiff but not uncomfortable

Our tester came with Volvo's T6 powertrain, which is a 2.0-liter supercharged and turbocharged I4 putting out 316 horsepower and 295 pound-feet of torque. It likes to rev, although the engine note is on the buzzy side when leaning on the throttle. It shuffles off quickly, thanks to its all-wheel-drive system, but the eight-speed transmission occasionally exhibited rough shifts when moving up or down the gears.

I spent a fair few hours on local Michigan back roads, and the V90 impressed me with its handling, despite its somewhat large size. It's not a performance wagon, per se, but it can hang. The suspension feels a bit stiff, even with the optional air suspension out back and the mode switch set to Comfort. There's a Dynamic setting for sportier driving, but between the hard shifts and the engine note, I found it best to leave it in Comfort most of the time. The additional steering weight in Dynamic felt nice, even if it's all synthetic.

Part of that boils down to the tires. Our V90 was shod with low-profile, 20-inch Pirelli P-Zero summer tires, which did little to mitigate bumps and shudders in greater Detroit's often choppy pavement. Most buyers aren't likely to opt for these tires anyway, so your mileage will likely vary, but adding a bit of sidewall would go a long way in smoothing out the ride. Overall, the trifecta of noise, vibration and harshness was managed well, although based on my experiences, I imagine its closest competitor (the E400 wagon) does a bit better job.

There's an Eco setting for the powertrain that focuses on fuel economy, and the stop/start function was welcome, but despite those things, fuel economy wasn't exactly great. Even though the V90 is EPA rated at 22 miles per gallon city and 31 mpg highway, I achieved just 20.5 mpg over a couple hundred miles, and I wasn't exactly standing on the gas pedal the entire time.

The V90 also comes with Pilot Assist, an advanced driver assist system driver capable of controlling the vehicle over short stretches of road, though it is a hands-on system — this is not a self-driving car.

When Pilot Assist was engaged, the steering didn't ping-pong in between lane markers, and it was generally smooth on the throttle when traffic started spacing out. However, I found the system braked somewhat late at almost every distance setting, so my overwhelming paranoia kept my following distance set rather far away, just in case. But on the whole, it's a smooth system and it still feels weird the first time it moves the steering wheel without human input.

Honestly, those small options aside, this would be the V90 I'd pick. The extra smoothness from the air suspension and the extra bump from the stereo are worth it, as is the $595 paint job. The $1,900 Convenience Package is great to have, too, because the surround-view camera system and front parking sensors will help keep the paint pristine for longer.

That brings the price closer to $65,000, which is still not a small chunk of change, but if you want a big, fancy station wagon, it's not going to show up with a big "BARGAIN" tag on it.

This section is especially important for the Volvo V90, because it's only available as an order. That means, if you want one, you will have to spec it out and order it from the factory. Volvo dealers are not actively stocking these, so not only will you have to custom-order one, you'll have to wait for it to be made. Using the V90 Cross Country as a test-drive platform is a good idea, as it's 90 percent the same.

While $55,000 sounds like a high point of entry, it's actually the lowest starting price in its segment. The E400 4Matic wagon starts at about $64,000, and the loaded-up Jaguar XF Sportbrake commands a hefty $70,450 (lower-spec, less-costly models are coming soon).

The V90 has the smallest, least powerful engine of the group, with its 316-hp I4 putting out a bit less than the E400's 329-hp V6 and the XF Sportbrake's 380 hp. The V90 is the only wagon where AWD is optional, not standard, as well. Jaguar has not yet released EPA figures for the XF Sportbrake, but the E400's 19-mpg-city, 25-mpg-highway figures fall short of the V90's thriftiness.

In terms of cargo space, the V90 features a nice 69 cubic feet of cargo capacity with the rear seats down, including the extra storage space found under the floor. That's a bit more than the E400's 64 cubic feet, but it falls short of the XF's cargo capacity by less than a cubic foot.

If the V90 intrigues you, but you're still stuck on the idea of ride height, you can always side step to the V90 Cross Country, which packs a bit more versatility in the way of a small lift and additional body cladding. Other automakers are doing this, too, although their vehicles (Subaru Outback, Volkswagen Golf Alltrack) are in different segments. The closest competitor to the V90 Cross Country would be the Audi Allroad, even though it's a fair bit smaller.

If you're looking for a fresh approach to fancy, the V90 should impress you with its smart looks and even smarter tech. It's not cheap, but it's less expensive than its two main rivals, and it offers buyers versatility in a package that's a step away from the traditional crossover formula. Wagons are back, baby, and while they aren't perfect, they're better than they've ever been.