2017 Volkswagen Golf Alltrack: VW courts the outdoorsy with an alternative to a Subaru

Last year, the beloved Jetta SportWagen evolved into the new Golf SportWagen, gaining a more modern power train, chassis and technology to go along with the new moniker. This year, the SportWagen undergoes yet another evolution, birthing a 2017 Volkswagen Golf Alltrack model.

This tall, all-wheel-drive variant of the SportWagen is aimed directly at Subaru's cozy niche of active lifestyle drivers -- those outdoorsy, mountain-bike-and-kayak, crunchy granola types. Should Subie be worried? I dirtied up a shiny, new Alltrack to find out.

As it's essentially a variant of the Golf SportWagen, there aren't too many surprises to be found on the Alltrack's spec sheet. It's underpinned by the same MQB modular platform as most of VW's lineup. The interior volume and most of the exterior dimensions are identical to the SportWagen's.

The Alltrack starts to differentiate itself with a suspension that raises the ride height by 0.6 inch over the SportWagen for a total 6.9 inches of ground clearance. Just over half an inch is not a huge elevation shift, but the effect is visually magnified by dark plastic cladding trimming the lower body and wheel arches. Roof rails are standard for all Alltrack models, adding equal parts active lifestyle appearance and equipment storage functionality.

The suspension changes are subtle, but the power train gets one substantial upgrade that goes a long way toward helping the Alltrack when the road gets rough: 4Motion all-wheel drive. 4Motion is an on-demand system that defaults to a basically front-wheel drive 90:10 front-to-rear torque split under most conditions, but can shift to up to a 50:50 split as slip is detected.

The Alltrack's Drive Mode selection toggle gains a unique setting to help the capability of the 4Motion system. The Off-Road mode adjusts the performance of the all-wheel drive, throttle and traction/stability control systems to maximize grip over dirty, wet and uneven surfaces.

The rest of the Alltrack's power train is mostly familiar from the SportWagen. There's VW's EA888 1.8-liter turbocharged modular four-cylinder at the heart of the engine bay making 170 horsepower and 199 pound-feet of torque. At the outset, the engine will only be mated to a six-speed dual-clutch automatic transmission (DSG). Post-launch, a six-speed manual transmission will join the list of options.

The addition of all-wheel drive and the beefier suspension push the Golf Alltrack's curb weight up 302 pounds more than the front-wheel-drive Golf SportWagen's. Interestingly, VW has chosen to outfit the Alltrack with a slightly larger fuel tank at 14.5 gallons versus the 13.2 standard reservoir. Presumably, this is to maintain parity with the SportWagen's cruising range, since the Alltrack's fuel economy (stated at 22 city, 30 highway and 25 combined mpg) is a bit lower than the standard model's.

VW's diesel controversy pretty much guarantees that we'll never see an Alltrack TDI model in North America, which is a shame because just the idea of a 40-plus mpg, fun-to-drive tall wagon with all-wheel drive has me feeling all tingly inside.

On the road...and off

On paved roads (and even over reasonably smooth gravel roads), the Alltrack doesn't feel dramatically different from the SportWagen. During "within the limits of the law" maneuvers, you'd be hard-pressed to tell the cars apart at all -- the differences are so subtle -- and with bone-dry roads and warm conditions, the 4Motion system didn't get much of a chance to strut its stuff.

I enjoyed the peppy and torquey delivery of the 1.8T engine -- VW has built a peach of a power plant -- and the transmission's Sport and manual modes allowed me to enjoy the broad meaty power band. It's no GTI, but the Alltrack does a solid job of blending comfort over bumps and potholes with the "Fahrvergnügen" that I've come to associate with the Golf nameplate.

The route was blessedly low-traffic, so I wasn't able to test the driver aid features (adaptive cruise control, blind-spot monitoring and semiautonomous parking, among others), but I did get to play around with the standard Android Auto, MirrorLink and Apple CarPlay connectivity, as well as the optional OEM navigation. Dashboard tech is quickly becoming one of VW's greatest strengths.

And then, I made a left off of the highway onto a short but moderate off-road segment to test the Alltrack's capabilities over less civil surfaces and paths. Following the chosen trail, I negotiated deeply rutted dirt, crawled up and down soft and uneven slopes, crept and slipped over smooth stones.

I got stuck...twice, but was able to reverse, regroup and renegotiate the trouble spots. The 4Motion system seemed slow to shift torque around, particularly if one of the wheels was raised from the ground, and the car would occasionally bog down or spin a wheel while the system figured things out or I reversed and tried again. (It didn't help that my trail spotter's instructions never got more specific than, "Give it more gas!" which I already was.)

That said, the Golf Alltrack made it back on the pavement under its own power for the ride home. The VW didn't like it and complained all the way, but the Alltrack deserves some props for tackling for what I would consider a reasonably challenging off-road section -- certainly more difficult than what most prospective buyers will ever attempt -- without too much trouble. No, the Golf Alltrack wouldn't be my first choice to take off-roading, but I can appreciate that it could probably negotiate most Green Circle-rated trails if it had to. 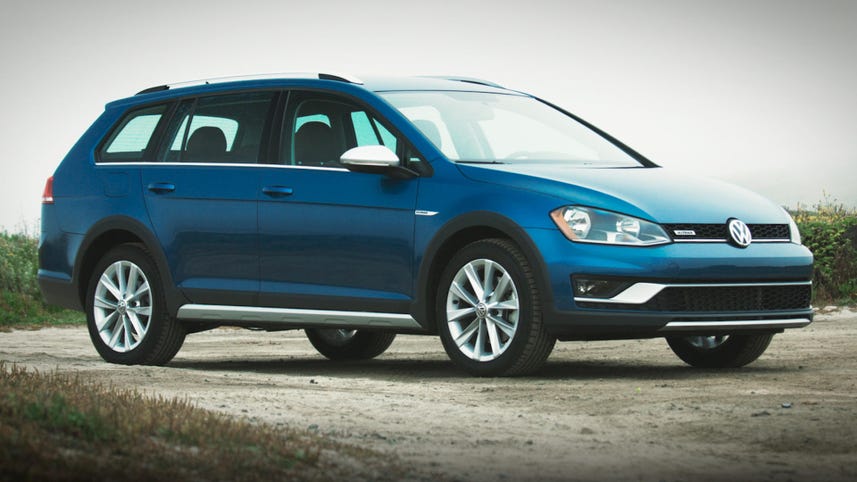 Alongside the Golf Alltrack, Volkswagen also showcased the Golf SportWagen 4Motion, another new addition for the 2017 model year. Sort of the missing link between the front-drive SportWagen and the Alltrack, the SportWagen 4Motion acts as an intermediate option for Golf buyers who want the four-seasons stability of all-wheel drive but don't need the increased ride height and ruggedized appearance of the Alltrack. It will also be offered at an intermediate price that makes it a bit more affordable than the Alltrack.

VW drew comparisons with the Subaru Outback during its predrive presentation, but I think the smaller Subaru XV Crosstrek may be an even better rival to the Golf Alltrack. The two cars are closer in size and more likely to be cross-shopped.

On paper, the Subaru maintains advantages in price, fuel economy and cargo capacity. Plus, I've grown to trust Subaru's all-wheel drive system and better ground clearance, more than I do VW's. On the other hand, the Golf Alltrack is more powerful, feels better on the road than I remember of the Subie and boasts better tech at its base level than Subaru offers fully loaded. Plus, the DSG is just a better transmission in most daily driving conditions than the Crosstrek's CVT.

Depending on your daily balance of dirt and tarmac, both are solid choices, but I'm giving the Golf a very slight advantage because it's dashboard tech, cabin comfort and on-road performance is just a step better than Subaru's, making the Alltrack easier to live with as a commuter and grocery-getter. Let's face it, that's what these cars will really be doing most of the time.

Should Subaru be worried about the Golf Alltrack? I don't think so, but it also shouldn't turn a blind eye to the Germans. If nothing else, it'll be fun to watch these two battle it out in the coming months. Let the crunchy granola wars begin!

The 2017 Volkswagen Golf Alltrack is available in S, SE and SEL trim levels ranging from $30,530 to $32,950 for DSG-equipped models before an $820 destination charge and options.