2018 Jaguar E-Pace review: So much fun, so many annoyances

Jaguar's playful cub is such a great drive, but inconsistent and unreliable tech make it hard to recommend.

The 2018 Jaguar E-Pace is a playful cub and a fantastic little performer. Whether on twisty back roads or during interstate blasts, the company's most compact model is fun to drive, delivering a perky powertrain and strong showings in the chassis and handling departments.

The 2018 Jaguar E-Pace's sharp looks and smart design details drew me in. Its fantastic handling and great power won me over.

Tech annoyances -- including park distance sensors that simply didn't work -- made the E-Pace difficult to trust and live with. The interior looks nice, but some parts, like the paddle shifters, feel cheap.

Jaguar's playful 2018 E-Pace is an extremely stylish and fun little luxury SUV, but inconsistent and at times unreliable tech make it hard to recommend over the strong competition in this class.

Plus, it pulls off the delicate balance of looking adorable and approachable, yet still sporty, with just the right amount of aggression. It's so charming, in fact, that by the end of a short test drive, I'd expect most drivers to come away thinking, "it's so good."

In truth, I had the same reaction. But after making such a strong initial impression, the rest of my time with this particular E-Pace First Edition was riddled with minor annoyances -- from fit-and-finish issues to tech hiccups and seemingly outright broken features. It's possible that these foibles affected just my test vehicle, but even still, my experience makes this model hard for me to recommend.

The E-Pace is the most compact model in Jaguar's lineup in terms of wheelbase (105.6 inches) and overall length (173 inches), coming in just a skosh shorter than the 183.9-inch XE sedan. However, its SUV proportions ensure that cargo space remains fairly generous, with 24.2 cubic feet of storage behind the second row and 52.7 cubic feet with the seats folded flat.

This subcompact SUV wears its proportions well -- I'd even go as far as to say it looks better than its already-handsome F-Pace big brother. I was drawn first to the E-Pace's F-Type sports car inspiration found in its headlamps, shoulder line and steeply sloped dashboard, only to be charmed by smaller "Easter Egg" details -- the cub windshield graphic, the leopard-print detailing within the center console and optional cub graphic puddle lights.

This cub has claws

Either way, the SUV sends that power to the standard all-wheel drive system via a nine-speed automatic transmission. Even with "just" 246 horsepower, I was pleased by the acceleration and responsiveness that this powertrain brings to the party. Zero to 60 miles per hour happens in just 6.6 seconds (6.1 seconds for R-Dynamic models) which is plenty zippy for a crossover of this size. Meanwhile, around town performance is smooth.

Handling from the well-sorted chassis and fixed sport suspension was also on point. R-Dynamic models feature an adaptive suspension, which would probably expand the E-Pace's comfort-dynamic envelope a bit, but I had almost no complaints about my example's fixed, sport-tuned setup, which offered tight, responsive steering.

Much of my testing consisted of highway miles, with a few runs along twistier roads to stretch the E-Pace's performance legs. I ended up averaging about 25 mpg for the week. That's in line with the EPA's official mpg estimates of 21 city, 28 highway and 24 combined. Numbers like that are fairly middle-of-the-road in a crowded class that includes the Volvo XC40 (26 mpg combined), Audi Q3 (23 mpg combined) and BMW X1 (25 mpg combined).

Beneath the skin, my E-Pace tester arrived laden with features I enjoyed, including a power tailgate with an optional kick-to-open, hands-free function, a rail mount/divider system integrated into the rear storage area, and optional puddle lights that illuminate the ground upon approach at night.

Jaguar Land Rover's unique Activity Key also appears in the list of available options. This $400 rubber wristband looks like a fitness tracker, but is actually a waterproof, dirt- and dust-proof -- nearly everything-proof -- RF smart key that can be used to securely lock and unlock the E-Pace while engaging in activities that might damage the standard electronic key fob. So, you can go surfing, kayaking or river tubing while leaving the fragile standard fob locked safe and dry in the SUV.

I've previously detailed on how the Activity Key works in my full review of the 2017 Land Rover Discovery, so you can dig into it there. 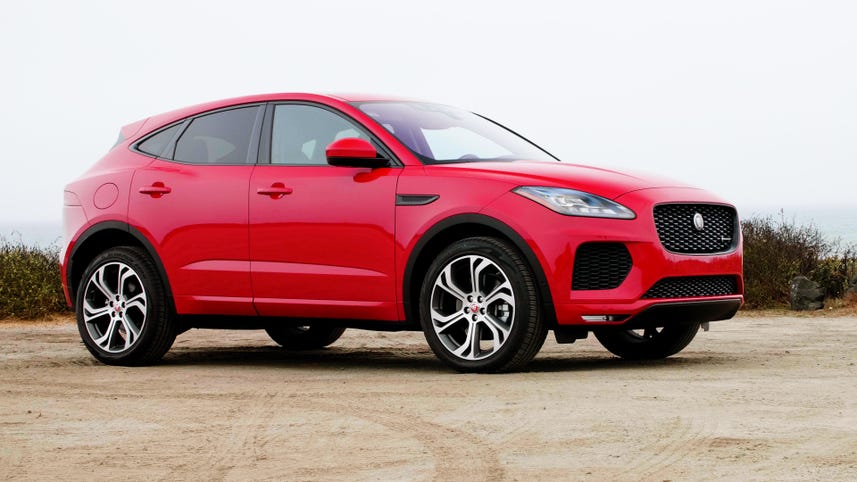 The Jag also checks many of the right boxes when it comes to safety and driver aid features.

Our First Edition E-Pace arrived with adaptive cruise control that worked in stop-and-go traffic, forward collision warning and lane-keep assist. With a few taps through a menu in the instrument cluster, the latter could be toggled between subtle steering assist when in traffic or a passive "rumble strip" mode that vibrates the steering wheel when the vehicle strays off line. I liked having the choice between assist during a commute and a quiet warning during more spirited drives.

Speaking of the instrument cluster, the E-Pace can be had with a 12-inch digital gauge package. My First Edition model was not so equipped and got along fine with its traditional analog gauges and full-color head-up display (the latter is projected onto the windshield). The all-digital setup is a bit of tech bling that may be worth a look for techier drivers, but considering some of the tech annoyances I'll discuss momentarily, I'd be tempted to keep things as simple as possible here. 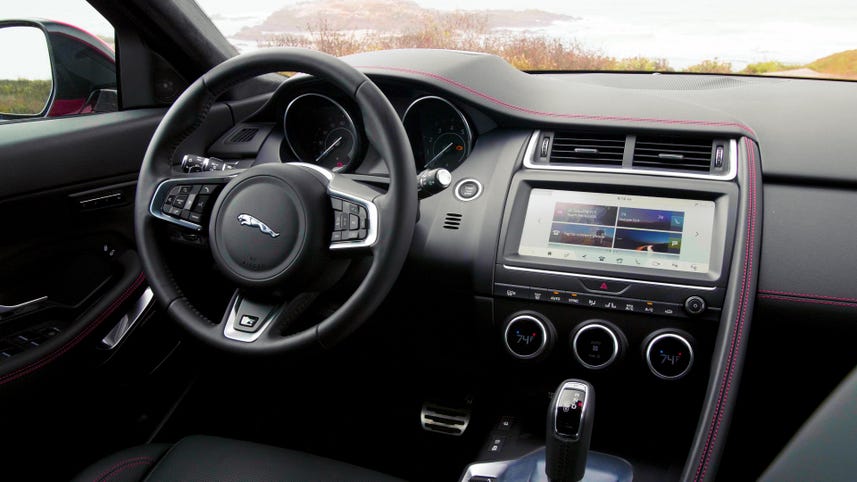 I like the look and feel of Jaguar's dashboard technology. The 10-inch InControl Touch Pro system standard on my First Edition tester was -- for the most part -- reasonably well-organized and looks quite good with colorful graphics and icons.

I particularly enjoyed how the home screen can be customized to one's liking by simply dragging and dropping from a selection of features and functions. This allowed me to easily monitor the elements that I cared most about, saving a ton of digging through menus while driving.

I also dug the predictive features built into Touch Pro. For example, at the beginning of a drive, the navigation system will offer predictive destinations based on previous driving habits -- such as "Work" in the morning or "Home" in the afternoon. The theory is that the system gets smarter the more you use it, building a cloud-connected profile of your habits and favorite haunts.

I also found Touch Pro's traffic data to be very accurate, but unfortunately, how the system used that accuracy is where a laundry list of annoyances began for me.

So many small annoyances

Accurate traffic data is always a good thing, but I found that the E-Pace's navigation is often too aggressive with its re-routing algorithms. Occasionally, the system would suggest a truly smart detour around smaller traffic jams, but more often than not, it would make dumb suggestions, including sending me scrambling to exit the highway only to immediately instruct me to get back on at the top of the off-ramp. Congratulations, that move would've saved maybe one minute?

On one longer trip, I noticed that every few minutes, the navigation would get stuck looping the same audible instruction -- saying something like, "In 14 miles, keep straight." It would say this over and over every few minutes. Later, I discovered the software had detected a traffic jam near my destination (nearly an hour away) and was constantly recalculating the route again and again as conditions changed (again, nearly an hour away). This caused it to repeat the last unchanged instruction each time. Touch Pro needs to be smarter about when and how it handles diverting around traffic.

And that's just the navigation annoyances. Once you get past the high-level, most commonly accessed menus, the Touch Pro menu system can be confusing and slow when looking for secondary or less commonly accessed settings and functions. Additionally, Touch Pro doesn't support Android Auto or Apple CarPlay connectivity, leaving drivers with no alternatives for maps or audio streaming apps should they not want to use Jaguar's software.

More worryingly, there were times during my testing when some of the E-Pace's tech features didn't work at all. On a half-dozen occasions during my week of testing, the rear camera failed to activate when I shifted the transmission into Reverse. Popping out to Park and back to Reverse often fixed the error, but that's unacceptable glitching.

Worse, the ultrasonic parking proximity sensors, standard equipped on our First Edition, also didn't work. Touch Pro showed them as "inactive" when starting the car, leaving me with a greyed-out icon in its interface. That also meant that I couldn't use the standard parking steering assist at all, since the technology uses the same sensors. (A Google search revealed that I'm not the only JLR driver to experience issues with the company's sonar sensors.) This doesn't bode well considering this British automaker's bad reputation for unreliable vehicles.

Beyond hinky electronics, I was also disappointed by the inconsistency of the E-Pace's cabin fit and finish. For the most part, I was impressed by the interior design, but my tester developed an annoying squeak coming from the second row that came and went over the week -- trying to locate the source nearly drove me mad.

While I'm on a rant, I have to point out the cheap and hollow-feeling paddle shifters: They come across like the kind of pieces you'd find on a cheap third-party Playstation 2 racing wheel, not those of a sporty luxury ride. In other words, they feel out of place in the E-Pace's cabin. I've complained about Jaguar's chintzy paddle shifters before, and it's annoying to see so little attention paid to such a major touch point in a vehicle this expensive.

The 2018 Jaguar E-Pace starts at $39,595 (including a $995 destination charge) for base model, but my First Edition rolled up very well-equipped, with a preselected suite of what Jaguar believes will be the most commonly optioned features and upgrade, priced at $54,545. However, this isn't how I'd spec an E-Pace.

Since driving performance is really the main thing this SUV does well, I'd start by looking at the more potent R-Dynamic trim level with more power and dynamic chops, because you may as well play to this cub's strong suit. For my money, the R-Dynamic SE is the best balance of performance, amenities and driver aid features at $49,995. That, I think is the E-Pace's sweet spot, but stepping up to R-Dynamic HSE -- which gets you adaptive cruise, nicer leather and 20-inch wheels for $53,845 -- might also be temping while still being cheaper than the First Edition.

I couldn't blame you for taking a second (or even a third) long look at this littlest Jag given its sharp looks and sharper performance. But given the laundry list of small issues I experienced, the E-Pace is tough for me to recommend, especially in a class that includes favorites like the Audi Q3 and Volvo's new XC40. Acura's new 2019 RDX is another solid choice at this price point, also a slightly larger SUV, if you're into that sort of thing.

If you're still sold on the 2019 Jaguar E-Pace (maybe you can get a super-great deal on a lease or just don't care about reliable tech?), allow me to recommend thinking really hard about investing in one other important option: an extended warranty.