The BMW X3 offers great utility and a smooth ride, but optional extras can add up quickly.

They say that for every pot, there is a lid, and no automaker has taken that to heart quite like BMW. The company's portfolio is full of super niche vehicles that are barely distinguishable from one another.

A sensible and comfortable crossover with plenty of utility. The available Parking Assist package includes a neat 3D-view 360-degree camera.

Its ADAS features are pricey and the stop-start system is jerky. It doesn't have the sporty driving characteristics associated with the BMW brand.

Although it doesn't stand out in any one area, the X3 is a decent all-around performer.

But while I have a hard time understanding odd "coupeovers" like the BMW X2 and X4, long-standing, traditionally shaped offerings like the X3 still make a lot of sense. Now in its third generation, the 2018 X3 doesn't try to revolutionize its original formula, but instead remains a solid offering among compact luxury crossovers. 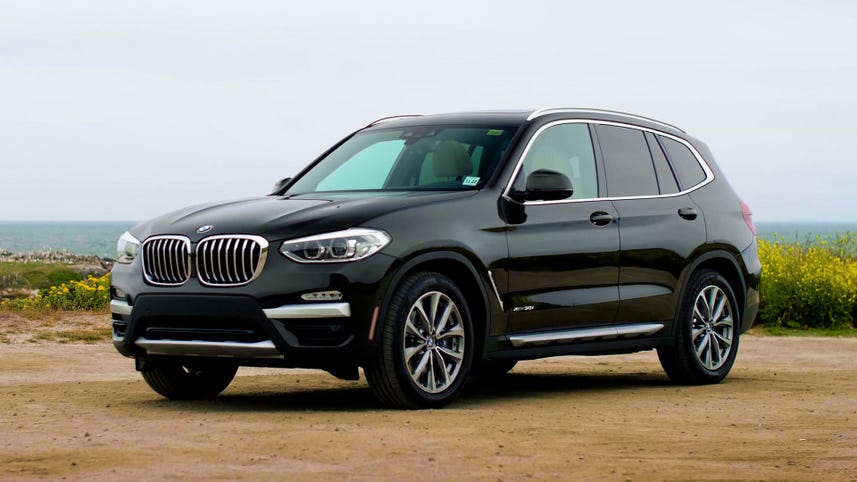 The standard X3 xDrive30i model is seen here, with a 2.0-liter turbocharged engine, all-wheel drive and an eight-speed automatic transmission. This engine makes 248 horsepower and 258 pound-feet of torque, and is enough to propel this 4,156-pound CUV to 60 miles per hour in a BMW-estimated six seconds flat.

Still, this isn't a performance car. The BMW X3 is best enjoyed in Comfort mode, cruising along the freeway with the heated seats activated on a chilly, foggy San Francisco morning. The ride quality is super smooth, the steering light. It's an easy car to drive over long distances.

Engage Sport mode as the road begins to twist, and the X3 responds nicely. The transmission kicks down and the shifts generally have a snappier quality; throttle response is quicker as well. The xDrive all-wheel drive system has a standard 40:60 rear-biased torque split, though it's constantly making adjustments based on driver demand and road conditions.

Adaptive cruise control, lane-keeping functionality and traffic jam assist are all part of BMW's $1,700 Driving Assistant Plus package, which isn't fitted to my test car -- a bummer as I slog through the Bay Bridge merge point. This is also where I notice the coarse, herky-jerky tendencies of the X3's stop-start system. Luckily, it's easy to turn the system off, and it doesn't affect overall fuel economy too much. The EPA rates the X3 xDrive30i at 25 miles per gallon combined, and my observed testing after a week of driving was 27.3 mpg.

Other active driving aids like lane-departure warning, blind-spot monitoring, daytime pedestrian detection and forward collision warning with emergency braking aren't standard, either. Instead, they're bundled in the $900 Driving Assistance package (which is mandatory if you also want the Plus pack). Considering some of these features are standard on far less expensive crossovers, the fact that they aren't fitted to every X3 is a real letdown.

My tester does have the $1,300 Parking Assistance pack, which includes a nifty 3D-view 360-degree camera. I can use the rotary dial and the iDrive infotainment screen to get a fairly realistic image of the X3 superimposed over the digital camera readout. The result is a super-cool interface that makes parallel parking -- and not curbing a wheel -- much easier.

In the X3's case, BMW iDrive 6.0 is housed in a large, 10-inch screen. You can control it via touch, voice or the aforementioned dial on the center console. BMW's weird gesture controls for volume and phone calls are on tap, too.

The iDrive home page features tiles for navigation, media, phone, BMW Connected Drive, vehicle settings and notifications. Most commands are easy and intuitive, but I found I had to dig deeper into menus and submenus for a few options, like the controls for the available head-up display.

Apple CarPlay is available for an extra $300. And while BMW uses wireless CarPlay, it means you can't use both the onboard Wi-Fi hotspot and Apple infotainment at the same time. I never got the system to use CarPlay with the wired connection. Android users, you're still out of luck.

The X3's interior features traditional BMW styling, with clean, intuitive organization of the vehicle's controls. Leather seating is a $1,000 upgrade over the standard leatherette, and both rows of seats can be heated.

You'll find 28.7 cubic feet of space behind the X3's rear seats. Fold the 40/20/40-split bench and cargo capacity increases to 62.7 cubic feet -- lowering the rear seats can be done manually or electronically, via controls in the hatch. These cargo numbers best competitors like the Alfa Romeo Stelvio and Audi Q5, but fall behind the Jaguar F-Pace, which offers as much as 64 cubic feet.

The 2018 BMW X3 xDrive30i starts at $42,650, not including $995 for destination. For my money, I'll start with the Premium tier model, and I'll add both of the driver assistance packages and the park-assist pack. And even though pretty much every other automaker offers Apple CarPlay for free, I'll begrudgingly fork over $300 for the privilege. All in, my ideal X3 costs $55,395. The car I tested, meanwhile, costs $57,620.

The X3 doesn't stand out in any one specific way, rather, it's a comprehensive, well-rounded package. It's comfortable and compliant for daily driving, and plenty useful, too. In a world where more and more automakers are trying to find niches in the luxury CUV space, sometimes it's best to just stick with what's worked all along.