It's not exactly a childhood poster car, but it delivers most of that fantasy with some sensibility shoved in the trunk.

The 2018 Audi SQ5 is a performance crossover, so it's probably not the car you had on your wall growing up. Nevertheless it's a purchase that will embody the blend between the desires of Younger You and the demands of the Adult You. The best of both worlds, amirite?

The SQ5 will get you anywhere in a hurry and has an impressive smattering of tech.

Its different driving modes aren’t perfect, and backseat passengers will be cramped.

It's expensive, but if you want a solid blend of performance and family-friendly usability, the SQ5 is worth a gander.

Audi's turbocharged SQ5 will leave you -- and, if applicable, your family -- smiling on most drives, whether it's on the way to soccer practice or an evening drive with nowhere particular in mind. Growing up sucks, but the Audi SQ5 is proof positive that there are ways to make it less of a bear.

Subtle looks, but it's all lies out back

Usually, the aesthetics of a car don't actually bother me, but there's one spot on the 2018 SQ5 that doesn't rub me the right way. The rear bumper has what looks like tailpipe outlets from a distance, but once you move closer, you'll notice that they're just fake expanses of plastic -- the real pipes are tucked up and behind it. Why even pretend?

Otherwise, the SQ5's pretty understated for a performance crossover. The Q5 on which it's based is a generally handsome, angular egg with some sharp lighting on both ends. Large 21-inch wheels are on offer for $1,000, and they fill out the wheel wells nicely, but for the sake of ride quality, I'd probably skip them and go with the standard 20s our tester had.

Wearing a $1,250 Nappa leather interior upgrade, the interior feels every bit as well bolted together as most automakers' most expensive offerings. The front seats are plenty spacious, but things get tight in the back, especially with headroom, where passengers above 6-feet tall are going to feel cramped.

As for its hauling abilities, the SQ5 is... fine. At 27 cubic feet, the cargo hold has less space than what my compact station wagon offers, but it's still ahead of competitors like the Porsche Macan and Mercedes-Benz GLC. It can't beat the jam-packing capabilities of the Jaguar F-Pace, but it'll work for short family road trips or visits to the golf course.

A mish-mash of modes

The SQ5's beating heart is a 3.0-liter turbocharged V6 putting out 354 horsepower and 369 pound-feet of torque. Smash the gas pedal and it sends all that business to all four wheels through an eight-speed automatic transmission. The SQ5 is adjustable in so many ways that it's hard to use just one word to describe its character, but it definitely feels quick enough, even if its performance numbers are only mid-pack on paper.

The car's outright adjustability means you can set it up however you like it, but somehow, each mode has a bit of a downside. With the transmission in its default D setting, it aims for efficiency with early upshifts that suck out some of the fun. Put it in S, and it livens up and feels like a performance car should, but the downshifts on deceleration are rough. The exhaust almost disappears in its quietest mode. You'll want it in Dynamic for some proper pop-burble-snort action, but the tradeoff there is incessant drone at highway speeds. The steering weight is also adjustable, but I don't know if that functionality is worth its $1,150 price tag.

Even in Comfort mode, the optional air suspension feels a smidge bouncy on Michigan's horrible post-winter roads. It's a performance SUV, though, so while it may not feel great in that specific instance, it firms up nicely in Dynamic mode and keeps the handling good and flat in corners. Some of the ride issues could very well come from my tester's 255/45-20 Pirelli Scorpion winter tires, which didn't see so much as a dusting of snow during my week with it.

If there's one spot where the SQ5 consistently shines, it's the brakes. My god, these brakes. Every time you need to stop in a hurry, the SQ5 will honor that while trying to remove your face from your head. It's impressive, and without an ounce of fade even after repeated pedal-jamming sessions.

In terms of fuel economy, the EPA rates the SQ5 at 19 mpg city and 24 mpg highway. I saw between 24 and 25 on the highway with everything set to its most efficient settings, but if you intend on having any fun, those numbers are merely aspirational.

With all the right options boxes ticked, Audi delivers one of the most tech-heavy lineups on the market. There's nothing in the SQ5 that you won't find anywhere else, but that's fine, because it's all pretty great.

Audi's MMI continues to be one of the most capable, if slightly confusing systems on the market. A touchscreen is eschewed in favor of a touchpad with handwriting recognition and a rotary dial. It's easy to get a basic handle on things, but there are so many menus within menus that it's a bit daunting if you're not intimately familiar with the system.

You may never look at the screen, though, because of Audi's optional Virtual Cockpit. It jams the most pertinent parts of the infotainment into a configurable gauge cluster display, and you can swap through its many screens with the steering wheel controls alone. It's great for reducing distraction. The only bummer is that both it and navigation are hidden behind a $4,500 upgrade (the Prestige trim), but Apple CarPlay and Android Auto are both standard, so even if you cheap out on the trim, you won't be left wanting for nav.

Autobrake is also standard, but the remaining complement of safety systems -- full-speed adaptive cruise, active lane assist, automatic high beams and traffic sign recognition -- is bundled into a $1,800 option pack. At this price point, I feel like some or all of that should really come standard.

If USB ports are your jam, you won't need that large of a knife to spread it around. The SQ5 has just two USB ports, and they're both up front, so your back-seat passengers had best bring power bricks or long cables. 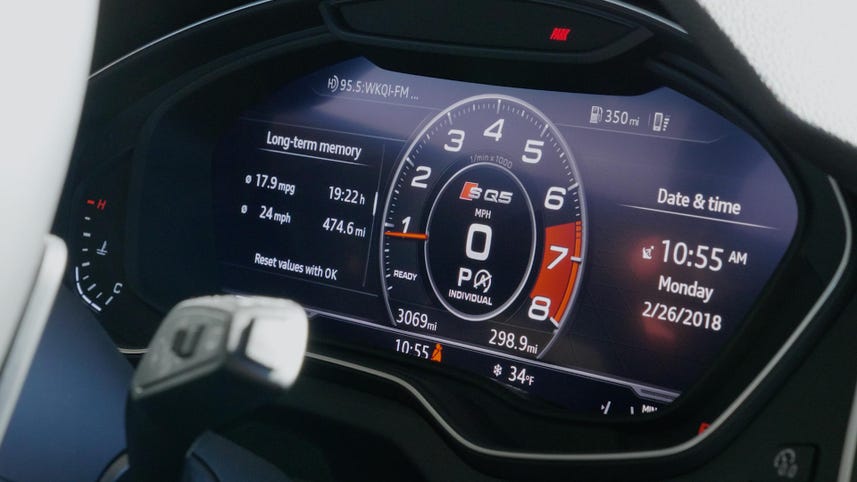 My SQ5 tester had more than $14,000 in options attached to it, provided you count the $4,500 Prestige trim as an option, which Audi does on its window sticker. I'd stick with it, because it adds vital upgrades like Virtual Cockpit, a suite of connected apps, navigation and a nifty Bang & Olufsen sound system. I hate it when fun colors are hidden behind costly upgrades, but $575 is a solid price to pay to avoid buying the car in black or white, the two no-cost paint colors.

I'd throw down an extra $1,250 for the Nappa leather interior and $500 for heated rear seats and a heated steering wheel. Another $3,000 adds the necessary (in my opinion) air suspension and a sport rear differential, and you arrive at an out the door price of $64,800, which includes the $975 destination charge. That's about $4,000 less than my tester, but that's how I'd buy one.

In the years since its inception, the SQ5's competition has grown markedly in both quantity and quality. It's not as quick as the Mercedes-AMG GLC43 or the Porsche Macan S, and while it lacks the power of the Jaguar F-Pace S, it performs about the same. The Merc and Jag have it beat on fuel economy, too. And the Audi betters all but the F-Pace on cargo capacity. But it's also a relative bargain, besting every single aforementioned vehicle on base price, although the Macan S is just $1,100 more expensive. The Jag starts at nearly 60 large. Ouch.

While none of these cars are cheap, you won't be let down if you can pony up the scratch. The SQ5 lets you get your speed jollies while offering decent family-hauling capability and an impressive tech portfolio. Being an adult isn't all that bad.