Its comeback flagship phone looks and feels awesome, but Samsung will have to work out its new digital assistant's kinks.

The Samsung Galaxy S8 is simply gorgeous. Gone is the S7's flat screen, and in its place is a tall, narrow drink of water with two curved sides. This is a phone that felt at home in my hands when I went hands-on with it for several hours at a journalist briefing in San Francisco. Better even than the LG G6, which has similar proportions but no curved screen, and sleeker than the iPhone 7 Plus, which puts a smaller screen on taller, wider body. For the first time, every major Samsung phone is an "Edge" model, with the Edge and Note's curve-screen software and all.

But elegant as it is in metal and glass, the S8 (and larger S8 Plus) is also the first marquee Samsung phone in a long time that leaves me with uneasy doubts. And those doubts have nothing to do with the disastrous Galaxy Note 7 and everything to do with a couple out-of-place choices and a work-in-progress digital assistant called Bixby, which we also spent some hands-on time with.

Good stuff first. Samsung's redesign makes the S8's 5.8-inch screen absolutely pop. There's no more physical home button, and barely a bezel. That means the screen takes up roughly 83 percent of the phone's face for tapping and viewing. If the S7's display felt generous before, this is positively expansive.

For Samsung fans who've never owned an Edge or Note phone, this'll be the first time you'll experience those curves. Until you try it for yourself, it's hard to explain exactly why the S8 feels more polished and luxurious than any other perfectly nice flat-faced phone. It just does.

Ready for the "but"? But. There are also some head-scratchers with the design of the S8 and 6.2-inch S8 Plus. This time, the fingerprint reader sits so close to the rear camera that I fear you'll smudge the lens when you're just trying to unlock the phone -- that happened in a few tests with a prefinal unit. Samsung also acknowledges that its face unlock feature is more convenient than secure. And while Apple, LG and Huawei have embraced twin rear camera lenses, Samsung is sticking with its single 12-megapixel shooter. On paper, that isn't very impressive. (See full specs below.)

Then there's Bixby, Samsung's answer to Apple's Siri, Google's Assistant and Amazon's Alexa. The three-in-one feature is a mishmash of voice assistant, Google Now cards and Google Goggles optical recognition. It's confusing, limited and, at this admittedly embryonic stage, very incomplete. (More below.) Samsung is asking for patience. This is up in the air right now, but there's a chance that Bixby may not come preloaded on the S8. It might be that you see a prompt to update the software as you set up the phone, but Samsung will give us more details closer to launch. New Bixby capabilities will roll out over time.

I really enjoyed my hands-on time with the S8 and S8 Plus so far. But even at this early stage -- with full testing to come -- it feels like Samsung's holding back. That makes sense. The company had to clean up the mess of its exploding Galaxy Note 7, and scramble to make sure that the S8 won't do the same. And after Samsung mobile chief DJ Koh promised CNET an "innovative" Note 8, I expect refinements to the design, Bixby assistant and the camera tech to make their way onto that phone.

For now, I'm cautiously optimistic about the S8 as an all-rounder that helps Samsung recover from its charred reputation. But it'll be our real-world tests on the final review unit in April that will show how close Samsung has truly come.

You also get a pair of AKG earbuds in the box, valued at $99 (Samsung finalized its sale of AKG parent company Harman last month). Everyone who buys a new S8 will receive Samsung Rewards Platinum level with bonus points, if they register for the program by May 14.

If you preorder the S8, you get:

A limited edition bundle for an extra $99 gets you:

The deal with Bixby

Bixby is a little tougher to explain. It's a three-parter that combines elements of voice commands with Google Now-style cards and image recognition. And Samsung has named each part.

Bixby Voice is the Siri/Google Voice Search/Amazon Alexa component that you speak commands to. But it'll be limited at launch. You can ask it to toggle your Wi-Fi settings, share a photo with someone and perform other phone-centric tasks, but you can't launch an internet search, like looking up the weather or asking when your favorite restaurant's going to close.

You start it by pressing and holding the Bixby button beneath the volume keys (like a walkie-talkie), or with a wake word -- Samsung will provide more details closer to the S8's sale date. 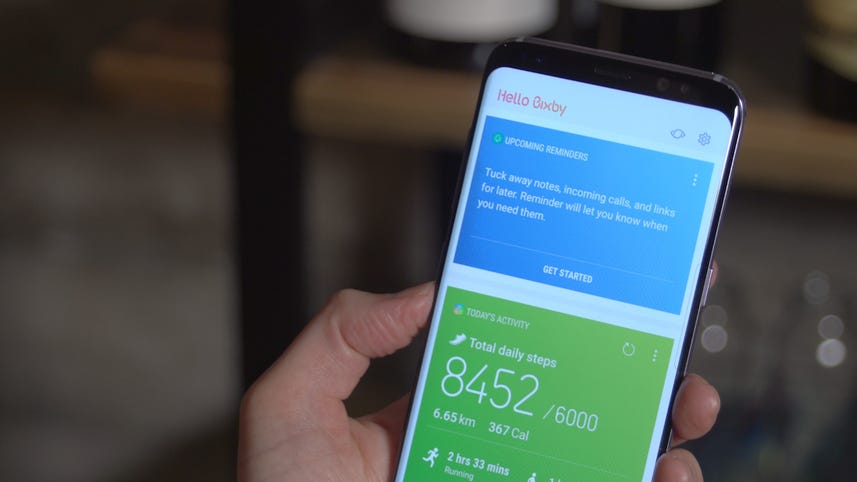 Bixby Home is like Google Now cards and it lives one swipe left of the home screen. It's a scrolling list of things like the weather and news stories, your step count, plus some recommendations for things you habitually do. For example, if you call the same person at 4 p.m. every day, Bixby Home will suggest the same when 4 o'clock rolls around. You can customize what you see in the settings, and share items with others.

Bixby Vision will feel eerily familiar to anyone who's ever used Google Goggles or Bing Vision on a throwback Lumia phone. A camera feature, it uses optical image recognition to extract text (OCR), identify objects and read QR codes. You can scan a book cover to shop for it, and learn more about wine through partner Vivino. It uses Google Translate to translate text in 52 languages, and Pinterest to assist with image search.

How did Bixby do?

Some demos worked well and some worked... partially. For example, the Bixby Vision portion wouldn't let me select all text on the Korean seaweed package I brought with me to the demo.

This was a prefinal version of Bixby, which Samsung is constantly updating and will continue to do so long after launch. It's much too soon to make a solid determination.

The only thing I can say is that the Bixby team will have to work around the clock to get the holes plugged before buyers receive it shortly after buying the S8 and S8 Plus.

Read more about my take on the Bixby digital assistant here.

Did Samsung make a safer battery?

The specter of the Note 7's exploding battery hovers over the S8. The truth is, we can't be 100 percent sure that Samsung made a safer battery until the final units are incident-free. But what we do know is that Samsung has instituted an eight-point battery test that it used on the S8 and S8 Plus, and on all phones going forward. My colleague Shara Tibken toured a Korean battery facility to see how it's done.

In addition, Samsung also claims that the S8 battery is about long-term performance rather than a short-term benchmarking burst. It's expected to hold a longer charge after 6 months, a year and two years compared to the S7.

An inside look at Samsung's new battery tests

"Where most batteries hold about 80 percent of their charge after two years, this battery should be capable of 95 percent of its original capacity," said Oh Boo-keun, vice president of Samsung's mobile R&D team.

Unlocking the phone with your face

Make the S8 your 'computer'