The Galaxy S7 Active has everything we love about the original model, but with a tougher build and a battery that lasts for days.

Associate Editor / How To

Dan Graziano is an associate editor for CNET. His work has appeared on BGR, Fox News, Fox Business, and Yahoo News, among other publications. When he isn't tinkering with the latest gadgets and gizmos, he can be found enjoying the sights and sounds of New York City.

I praised Samsung's Galaxy S7 Active in my initial review -- for its beautiful 2,560x1,440-pixel resolution display, speedy processor, excellent 12-megapixel rear camera and the largest battery Samsung has ever put in a smartphone. But the failure of its water-resistant coating threw cold water in my face.

The Galaxy S7 Active has extra long battery life and is resistant to dust, water and drops. It has has the same speedy performance, expandable storage and excellent camera quality as the original S7.

The bulky, plastic design feels cheap compared with the glass-and-metal S7 and the phone is expensive.

Rated IP68, the S7 Active is supposed to survive submersion in 5 feet of water (1.5 meters) for 30 minutes, but our further testing with the device found that's not consistently true.

When the Active failed waterproof tests conducted by Consumer Reports, we ran several more tests ourselves. Two of CNET's four waterproofing tests with the S7 Active failed, which led to CNET's decision to lower the phone's performance subrating from 9 to 7, and to lower the overall phone rating from 8.8 to 8.0. Since then, Samsung released a statement that it identified and fixed a problem on the manufacturing line. So we retested the S7 Active (alongside the S7 and S7 Edge) and all three phones passed our trial by water. 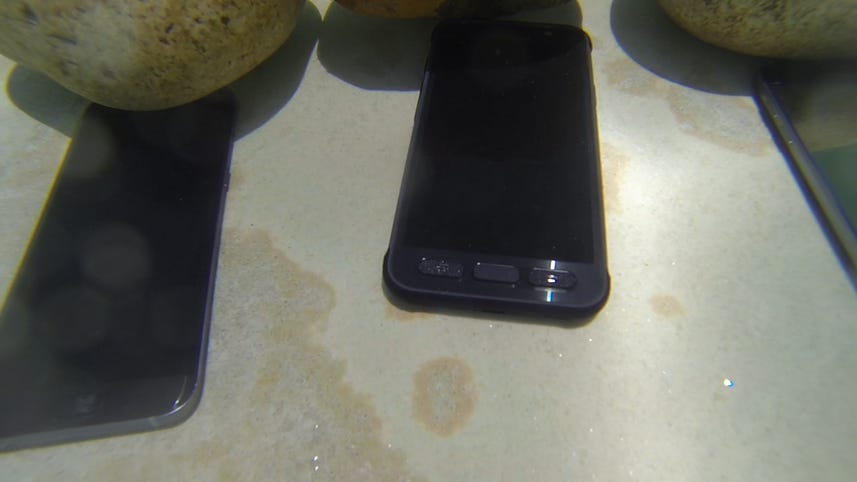 While still a good phone overall, the inconsistent test results for a major feature concerns us and we can no longer recommend the phone with complete confidence. However, we still expect the Active to hold up under normal usage (e.g., not submerging the phone underwater for 28 minutes). You should still be able to withstand a drop in the toilet for 3 minutes (ew), which is more than most devices can handle.

Cannonball! In the pool with the S7, Edge and Active

Despite the phone's questionable behavior when held underwater, we do still recommend it for anyone looking for a durable and high-end phone -- this is the S7 to get if you don't want to use a case and want to avoid cracking your screen like this. (Galaxy fans who put a premium on design should stick to the S7 or S7 Edge.) Check out our existing review of the S7 to see how the camera and processor perform.

Here's why you'd want the Active instead

I was initially turned off by the Active's cheap look and feel, but it has worked hard to win me over, because it has a few things that the better-looking S7 and S7 Edge don't. (And also a few reasons why you may want to stick with the original S7 or S7 Edge).

Samsung put an extra layer of protection on top of the display glass to keep it from cracking, and in general, the phone is rated to withstand falls from up to 5 feet. I've dropped it numerous times on the sidewalk, gravel and hardwood floor, and while the body has scratched slightly, the screen has remained unscathed.

The Active is also equipped with a military-grade body. Essentially, it's an S7 with a large plastic case around it. Sure it may not be the prettiest to look at, but it adds extra grip and helps protect the phone. Like the original S7, the Active is resistant to water and dust. You can drop it in the toilet, have it fall in sand at the beach, or knock it off the table. You can have peace of mind knowing your expensive phone is less likely to break.

The Active Key can keep you efficient

One of the most overlooked features of the phone is the Active Key, a programmable button located on the top left-hand side that can be used to quickly launch apps. By default, a single press will open the Activity Zone fitness hub, and a long press will launch the DirectTV app. A double press here brings up Samsung's Emergency Zone, allowing you to instantly call 911 or send a preset SOS message. The good news is that you can reprogram the button to open other apps. A single tap now brings me to Snapchat and a double tap to Spotify.

A battery that will last for a day

The Active's 4,000mAh battery is one of the most impressive I have ever seen. That's 1,000mAh more than the regular S7 and 400mAh more than the S7 Edge. In our battery test, which continually loops a video until the battery completely drains, the Active lasted an astonishing 21 hours and 30 minutes. (We're verifying with additional tests and will average the final results soon.) This phone will keep going well over a day with normal usage and when it is time to charge, it supports both wireless charging and fast charging.

There aren't a lot of truly rugged phones out there, so it's great to see the Active step up as a real, fully featured flagship, but the durable design may not appeal to everyone -- it certainly doesn't appeal to me. And as much as Samsung says the screen is protected, there's still a chance you could shatter it, because life happens, and Samsung doesn't offer a guarantee like Motorola does with the Droid Turbo. (There is, however, a standard one-year warranty, or you can get an extended warranty.)

So while the Active is pretty much your only option for a tougher premium phone, unless you're really interested in physical navigation keys or the burlier look and feel, you could save some extra cash by picking up the original S7 and a rugged case.

It may not be as waterproof as Samsung claims

The Active carries a water-resistant rating of IP68. That means it can withstand being submerged in 1.5 meters of water (5 feet) for up to 30 minutes -- manufacturers must specify a depth for the IP68 rating.

Following a report from Consumer Reports, CNET ran four tests to determine just how waterproof the Active really is. In two tests, the phones were fine, another had moisture in the camera lens and eventually failed to power on, and the last one died a terrible and tragic death (we got it all on video and in photos).

Samsung's Galaxy S7 Active takes a dunk in the pool...and then dies