Oppo's R15 Pro is a great phone, just not quite as great as the similarly priced OnePlus 6.

Arguably the coolest phone brand among Android enthusiasts is OnePlus. It's both powerful and stylish, with a scarcity that makes it feel special. OnePlus, you may not know, has a lesser-known (in the US) sibling called Oppo. Oppo's phones are also worthy of your attention.

The Oppo R15 Pro is a strong all-rounder, giving you solid cameras, battery life and power for a reasonable price. It also looks less like an iPhone than previous models, and it comes with a headphone jack.

Oppo's operating system is still a blatant iOS clone, and portrait photos can look washed out. They charge through the outdated Micro-USB port.

Both brands, along with Vivo, are owned by Chinese company BBK Electronics, and much of what makes the OnePlus 6 great also applies to Oppo's latest flagship, the R15 Pro.

The R15 Pro has a sharp 6.28-inch display, a strong camera game and impressive design -- if you can get over the notch. It's being released alongside another phone, the "regular" Oppo R15.

The two R15 variants look identical, but have big differences inside. Most notable is the processor: The R15 comes with a MediaTek Helio P60 CPU, while the Pro is powered by a Qualcomm Snapdragon 660. We only got the Pro, so couldn't compare the two, but on paper the two midrange processors should perform similarly. The Pro has 6GB of RAM, though, more than the R15's 4GB, and a different camera setup with more megapixels.

The Pro will sell for AU$779 in Australia, but won't be officially available in the US or UK -- its Chinese pricing converts to $515 or £385. For that, it's an excellent example of a reasonably priced phone that doesn't feel like it makes any meaningful compromises. It overachieves more than other midrange phones, like the awesome Moto X4, and I even prefer it over some much pricier phones, such as the Nokia 8 Sirocco.

Really, its major problem is big brother: The OnePlus 6 is the same price, but has a better operating system, faster processor and longer battery life.

No escaping the notch: 15 phones with screen notches

Oppo R15 Pro looks less like an iPhone, despite the notch

Oppo has a history of borrowing liberally from Apple's iPhone designs. But while the R15 has a notch -- an Apple first that has since become a design trend with Androids, particularly now that Android P standardises it -- it doesn't look as similar to an iPhone as previous Oppo phones. That's an improvement, as the Apple-esque design of the R11 was jarring.

The R15 Pro has a huge 6.28-inch display, no home button and minimum bezels. It has facial recognition, which I found to be even more responsive than on Huawei's P20 Pro. Its biggest improvements are on the backside, though. We got the starry purple unit, which has a metallic, holographic finish that's slightly iridescent. It actually looks more similar to the aforementioned P20 Pro than to an iPhone. It also comes in snow white, thermal red, dreamy red and ceramic black.

There are cons, though. The R15 phones run ColorOS, Oppo's brand of Android 8.1 Oreo, which is a blatant, unimaginative attempt to clone iOS. They're charged via Micro-USB ports, which would be fine two years ago but we're very much in the USB-C era now. Plus, while the R15 Pro comes with dust and splash resistance, neither model is waterproof. Keep this one away from the pool.

On the plus side, there is a headphone jack.

Oppo slowly moves away from iClone design with R15 Pro

Oppo gives you lots of megapixels

I found the R15 Pro's cameras to be excellent. Photos look detailed, sharp and realistic. The automatic HDR is solid, as it doesn't make pictures look artificial, as some HDR shooters can. The selfie camera also serves up the goods, especially if you're outside as it doesn't deal with artificial light super well. The beautify feature, which smooths out your skin tone (read: makes you whiter), is still here.

Strangely, though, the rear cameras' excellence doesn't extend entirely to portrait mode. The phone is capable of shooting profile picture-worthy portraits, but it'll take some finagling. The lens often captures way too much light, making some portraits washed out or looking unnaturally bright.

The cameras are more than capable at night, too. Not Huawei P20 Pro-capable, as photos come out a little grainy in comparison, but certainly better than you'd expect from a midrange phone. On the video front, it offers 2,160-pixel shooting at 30 frames per second, and can give you up to 240 fps slow-motion video. 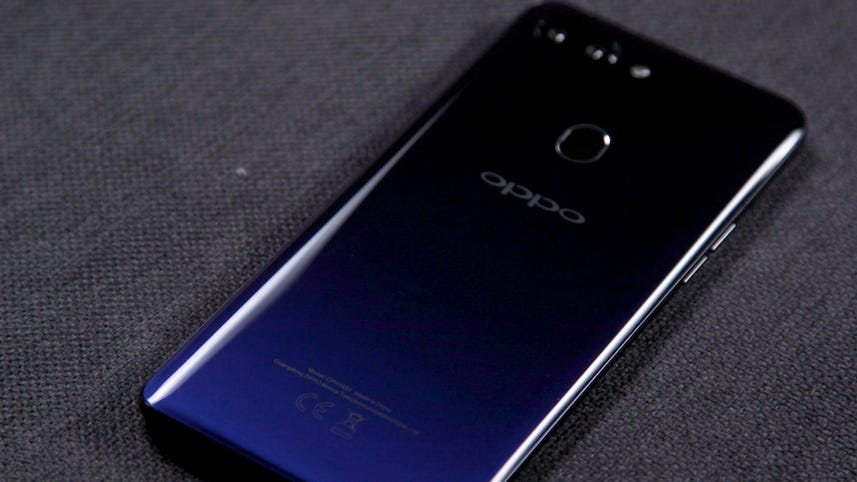 All the performance and battery life you need

The R15 Pro's greatest strength is its lack of weakness. It's not a flawless phone, but it's without any real deal-breaking problems. It's reliable.

For starters, the phone has a big pot of juice with its 3,340mAh battery. I always got home with a good chunk of battery left, after a day of reading, social media-ing and watching too many YouTube videos on cellular internet. It lasted just over 14 hours in our video-loop battery test, which isn't quite as good as the OnePlus 6's 15.5 hour result, but is still on the higher end of the scale.

And yes, the Oppo R15 Pro offers only midrange power, but I've long questioned the need for a high-end processor. It's well behind the Huawei P20 Pro and Galaxy S9 in benchmark tests, but as someone who used both of those phones in the weeks and months prior to the R15 Pro, I can't say there was a noticeable drop in performance. That includes gaming, where 3D games like Asphalt 8 faired just fine.