Nokia 8 Sirocco review: The right phone for the wrong price

The Nokia 8 Sirocco is the best Nokia Android phone yet, but not exciting enough to justify the cost.

The Nokia phone comeback has been paved with budget and midrange devices, plus a few nostalgic blasts from the past, but it's the Nokia 8 Sirocco that represents the brand's best nose-in-the-air efforts. However, like last year's regular Nokia 8, the Sirocco here feels less like a comeback and more like catch up, undistinguished by any true standout features and a price that feels higher than it should be given the tight competition.

The Nokia 8 Sirocco is fast, feels sturdy, has a long battery life and runs the sleek Android One operating system.

It lacks any standout features to justify its premium pricing. The Nokia 8 Sirocco's camera isn't reliable enough, and its design, while improved over the regular Nokia 8, feels stout and a little outdated.

While the Nokia 8 Sirocco does suffer from minor faults, its main issue is being outclassed by similarly-priced competitors.

You should think of the Sirocco as the Nokia 8.5. It's more than a slight update from last October's Nokia 8, but it not enough of a true overhaul to create a compelling reason to buy it over rival phones like the Google Pixel 2 or, if it's sold in your region, the Huawei P20 Pro.

The Sirocco is swankier than its predecessor; it sports Galaxy Note-esque curved edges, a sharp screen and has an excellent build quality. Its processor is a year old, but that doesn't result in any tangible slowdown. The camera's photos can be hit or miss depending on your shooting conditions, but there are no other major gripes I have with the phone.

HMD Global, the maker of Nokia phones won't officially sell the Nokia 8 Sirocco in the US, though it'll cost £649 in the UK and AU$1,199 Down Under. That UK pricing converts to roughly $880. And price is really where the problem lies.

At $599, £499 or AU$799, this would be a worthwhile buy. But its current price puts it in the same neighbourhood as the Samsung Galaxies and Huawei P20 Pros of the world, a neighbourhood the Sirocco doesn't quite fit into.

The Arnold Schwarzenegger of phones

If the Nokia 8 Sirocco were a type of athlete, it'd be a bodybuilder. Meticulously designed, it's easy to see where the attention to detail went, but it may be a little too bulky for most.

Having removed the home button of yesteryear, the Sirocco has more screen and less bezel than its predecessor. Its stainless steel body is also thick and heavy, but in a good way. It has a weight to it that makes it feel expensive. But there are design issues. With its blocky width, it reminds me of Huawei's Mate 10, a phone I loved. But the Mate 10 had a 5.9-inch display, while the Sirocco's shorter 5.5-inch screen, combined with its width, makes it look and feel stout.

Although 5.5 inches was once considered a large size for a screen, the Nokia 8 Sirocco's design now feels outdated. The iPhone X and Samsung Galaxy 9 pack 5.8-inch displays into similar frames, leaving this Nokia phone behind in terms of pure screen space. The Sirocco doesn't have the notch screen design of so many phones these days, but it also lacks face-unlock tech that notched Androids and Google phones often have. There's also no headphone jack, a now common design trend. Instead, you'll need a dongle adaptor for the USB-C port.

Less popular all round will be how the phone actually feels. The bezel is reinforced around the sides, such that it feels slightly sharp when you grip the stainless steel body. It does make the device feel more sturdy, but its not worth the discomfort. I did get used to it after a few days, but was reminded of it every time I felt the gentle touch of another phone.

There's no lack of trying on Nokia's part here. But not all of its design swings here hit the mark.

In an era where the $529 OnePlus 6 has the same processor as the latest Samsung Galaxy, a phone's camera is often where it sets itself apart. Here's where the Sirocco fails most.

On the back of the Sirocco you'll find two 12-megapixel cameras with Zeiss' branding of approval, while a 5-megapixel shooter sits on the front. I was pleasantly surprised by the front camera. If you've got lighting on your side, you can get some well balanced and detailed photos. I did sometimes struggle with overexposure, but issues like that almost always come along with selfie cameras.

The rear cameras don't have an excuse, though.

Let's start with the portrait shots. All premium phones have a bokeh mode, where the background is blurred to foreground the subject. The Sirocco does too, except it comes in the form of a slider. As you slide a button from left to right, the bokeh effect intensifies. This would be fine as an additional feature, but as the sole way to take these portrait shots, it requires far more work from you than do other phones.

More troublingly, the Nokia 8 Sirocco's cameras are finicky. It takes time to get the slider in just the right spot, and this becomes exponentially more tricky if your subject is moving even slightly. Finally, other phones will tell you if you're standing too close or too far from your subject to actually snag -- this one doesn't, making that perfect portrait even more elusive.

I did manage to take some impressive-looking photos with the Sirocco, but it was more of a struggle than doing so with similarly-priced phones like the Huawei P20 Pro or Google Pixel 2 XL.

The Bothie mode, where you take a shot that utilises both the front and rear cameras so as to capture a thing as well as your reaction to said thing, is still here, and still not particularly useful.

The Nokia 8 Sirocco's image quality is average to good. I had some trouble with overexposure, of a nearby source of light flooding the picture with brightness, and there's no optical image stabilsation (OIS) despite it being present in the Nokia 8. But the Sirocco is still capable of capturing some excellent shots. They're also serviceable, though not extraordinary, in low-light conditions.

Basically, if you're shooting in daylight and have time to maneuver about, you've got a good chance of getting a winner. When it comes to portraits, there are far more reliable phones out there.

In many ways, the Nokia 8 Sirocco's camera encapsulates my sentiments about the device itself. Far from bad, but not exceptional enough to justify the price.

Watch this: The Nokia 8 Sirocco is solid, but not exciting enough for its price
01:48 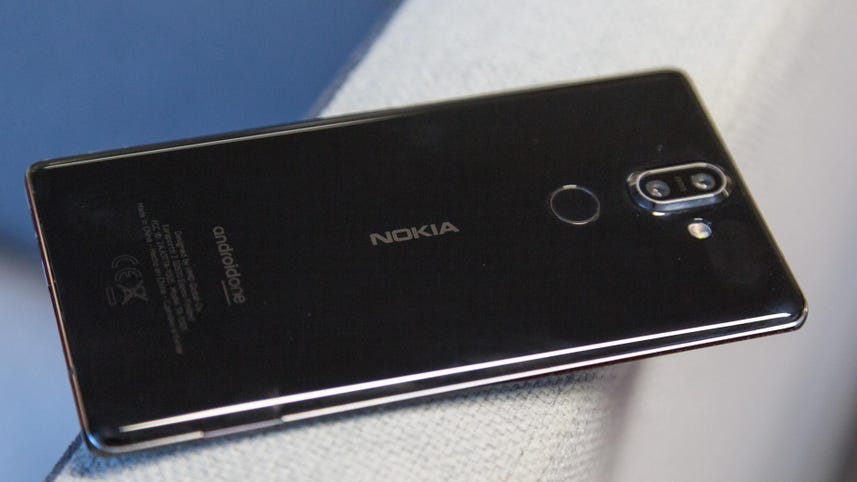 The Nokia 8 Sirocco is solid, but not exciting enough for its price
1:48
Watch Now

Inside the Nokia 8 Sirocco is Qualcomm's Snapdragon 835 processor. This has raised some eyebrows, as that's the exact same chipset that was in flagships from from 2017, including the Samsung Galaxy S8 and, yes, the Nokia 8.

But there's little reason for concern. The Snapdragon 835 is a powerful chip, and can still easily handle all of your smartphone needs. The Sirocco performs fine on the gaming front as well, as I played intensive 3D games like Tekken with no trouble at all.

While the Nokia 8 Sirocco doesn't perform quite as well as the Snapdragon 845-powered Samsung Galaxy S9, its benchmarking results were still in the top spectrum of phones out there. This is particularly true of its graphical capabilities. In other words, don't worry too much about the "older" processor here.

A closer look at the Nokia 8 Sirocco

There's little compromise on battery life, either. The 3,260mAh battery has enough juice to last you a full day. With emails, browsing various social media apps and a video here and there, I'd end my work day with around 60 percent left in the tank. It lasted around 14 hours and 30 minutes in our looping video play battery testing, which is a fairly strong result.

The Sirocco comes with 6GB of RAM, which is plenty for a phone, and 128GB of onboard storage. There's sadly no option for expandable memory, if you're into that sort of thing. There's also no headphone jack, but it is IP67 certified, which means the Sirocco is waterproof to a depth of 1 metre for up to 30 minutes (we tested this ourselves).

You can chalk up the Nokia 8 Sirocco's solid performance, in part, to its software. HMD Global, the maker of Nokia phones, went with Android One, a stock version of Android that's unhindered by the bloatware that affects almost every other Android phone out there. This is definitely a plus: Anyone who's used a lot of phones knows the closer the operating system is to pure Android, the better.

Android One is an operating system that's often used on budget and midrange phones around the world; the Nokia 8 Sirocco is the first premium phone to use it. It's in essence the same operating system you'll get on Google's own Pixel phones, with very slight differences depending on the brand. In this instance, the only difference is the phone comes with a camera app from Nokia.

In addition to a clean Android experience, you're also guaranteed to be first in line for software updates and security tweaks for two years. The Sirocco get ticks of approval when it comes to hardware and software, but so do many phones that are several hundred bucks cheaper. What it lacks is anything worth getting you excited enough to justify its cost.