Our first looks at the second season of Discovery give rise to more questions than answers.

At Comic-Con 2018, we got some much anticipated news about the second season of Star Trek: Discovery coming in January on CBS All Access. (Disclosure: CBS is CNET's parent company.)

Michael Burnham (Sonequa Martin-Green, pictured) and her crew will struggle in season 2 with their loss of time. Read on for more tidbits we've  picked up.

This gallery was originally published July 20 and is updated as we find more images to share.

New Starfleet officer Linus is of the redesigned Saurian species.

In July, Mount said we'll meet the original "Number One," played by Rebecca Romijn and originally played by Majel Barrett-Roddenberry. Romijn is set to moderator the show's New York Comic Con panel this weekend where we expect even more tidbits about the show.

We expect more info during the NYCC panel, in addition to a new trailer and perhaps even an official premiere date.

Beam me up, Reno

A new fantastic point of view

Burnham stares ... lovingly? fearfully? at the "red beings" we're led to think are at the heart of this season's mystery.

Looks like once the away team is on this new world/ship we're going to do some contained exploring. 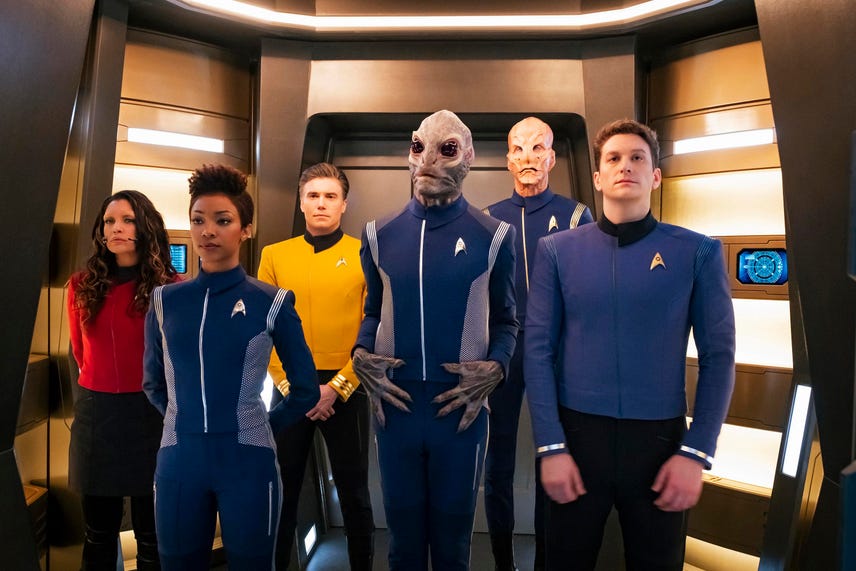 Be sure to check out the teaser for the second season of Discovery coming January 2019 on CBS All Access.

Our first look at Spock

Rebecca Romijn as Number One.

68 Photos
24 things you should never, ever google

24 things you should never, ever google