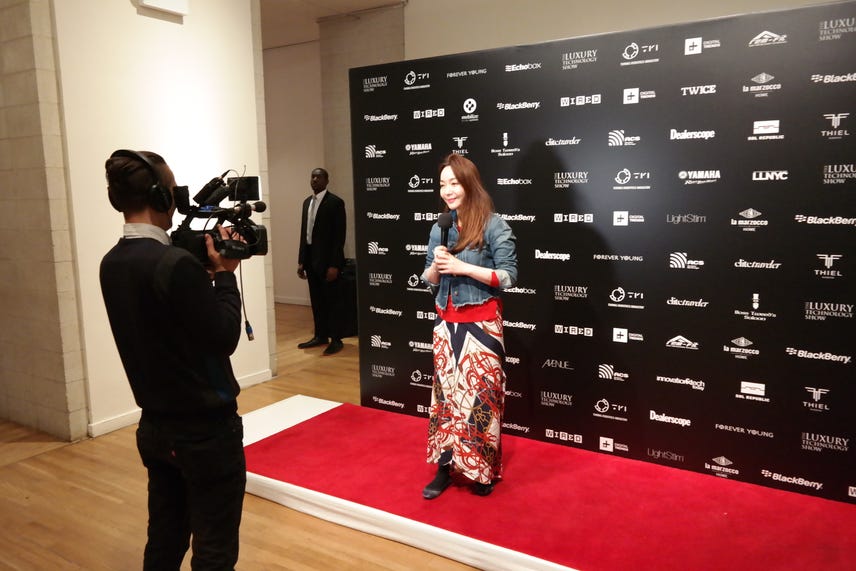 New York's Luxury Technology Show is a collection of frivolous devices that are extra-expensive, just because they can be.

That's CNET's very own Bridget Carey relieving her pain on the LightSim LED Bed. It costs $65,000. International pricing information isn't available, but that's about £52,000 or AU$85,000.

Pangea's marketing pitch for its copper-infused bed is "A luxurious copper mattress at an affordable price." It was comfortable -- and relatively reasonable at $1,100 (about £880 or AU$1,400) for the king size mattress.

The Pangea bed with a little lighting to set the mood.

Neoefect's Rapael Smart Glove may look a little like the NES Power Glove, but it's really a medical device that's an "active finger and hand rehabilitation solution." We wrote a story about the Rapael at CES 2017.

The Rapael has been approved by both the US and South Korean Food and Drug Administration. It is offered in two versions: one for clinics and one for home use. The home version is available to rent monthly for $99, which converts to about £80 or AU$135.

The Ono is a compact $99 3D printer that lets you print stuff from your phone. The price converts to about £80 or AU$130.

Since it's an open-back headphone, you really need to test it in a quiet room -- which I couldn't do -- so I can't tell you how good it sounded.

Lomography defines itself as "a globally active organization dedicated to analog, experimental and creative photography." Yes, you heard right, analog, not digital, which means real film. It sells a host of advanced "toy" cameras, with the highest end model going for around $250. That's about £200 or AU$325.

A new higher-end model with a glass lens is arriving soon.

Known for its high-end wired speakers, Thiel has now entered the wireless fray with its Aurora line of Wi-Fi and Bluetooth speakers, which start at $600. International pricing isn't available, but that's about £480 or AU$780.

Drink in that sound

Wood you buy one?

LumiDiet, which allegedly helps shrink your waist line, has apparently been a big hit in Korea. It's not available in the US yet, though you can get it on Amazon for a $1,000.

Apparently, it uses uses LFR (Light Fat Reduction) technology with 188 LEDs and vibration function to trim that fat. One of the reps told me it would be coming to US and cost around $500. That's about £400 or AU$650.

LumiDiet testimonial photos. Of course, it's hard to confirm whether the device actually works without using it.

I'm not sure you can wear it around all the time, but it does give you a high-tech look. Shame it isn't also a step tracker.

Every luxury show has boutique tequila distributed by lanky servers who get photobombed by the bartender.

The original Turing Phone is made with liquid-metal and billed as being stronger than titanium and steel -- and extra secure against hackers. The first Turing runs the Sailfish OS and cost $610 (about £490 or AU$790) for the 16GB version. The next version, coming later this year, will run Android.

Don't worry, you won't have to wear a spiked leather glove to use the phone, but it is a good look if you can pull it off.

Perhaps you've heard of Sirin Labs. It's the company that makes insanely expensive Android phones that cost around $15,000. That's a lot of green. International pricing isn't available, but it converts to about £12,000 or AU$19,600.

Everything can be smart these days, even pillows. Meet the Zeeq, the $300 pillow that tells you how loud you snore. Its price converts to about £240 or AU$390.

You couldn't test drive the Tesla, but you could sit in it.

This gin isn't battery powered but it does make you feel better about overspending on electronics.

Danish company Vifa was on hand with its Nordic wireless speaker line. These look like handbags and start from 399 euros. That's around $450, £346 or AU$566.

Vinci headphones have a full Android touch interface built into the right earcup -- it's like having a small Android tablet on your head. The Kickstarter has raised almost $1 million, but the product hasn't shipped yet.

The Vinci has music streaming services built in.

MrSpeakers makes some sweet sounding planar magnetic headphones. He's got a new closed-back model, the Aeon, which only costs $700. International pricing isn't available, but that's about £560 or AU$915.

Crestron, which caters to a high-end clientele, is a staple at these luxury shows.

What's a luxury show without at least one set of totally wireless earphones. Sol Republic was there with its Amps Air. They cost $150, £150 or about AU$240 converted.

By popular demand, here's one more shot of CNET's Bridget Carey relieving her pain on the LightSim LED Bed.

No luxury show is complete without a few random VR stations.

Samsung or Apple wasn't at the show, but BlackBerry was.

Mikevision didn't have a table at the show but one of its reps who was roaming the show floor saw my CNET name tag and approached me with this Sandfox smartwatch. The company, which wants to bring stuff you see in sci-fi flicks to life, says its the first watch controlled by natural speech recognition, as well as the first "independent smartwatch not needing a connected phone." It'll cost around $600 when it ships. International pricing isn't available, but that's about £480 or AU$780.

The dialing interface for the Sandfox.

Yamaha had one of its high-end WaveRunners on hand that had some nice extras.

Limited-edition Marilyn Monroe guitar from d'Angelico Guitars, which is only a few blocks away from CNET's New York office.

Grillbots are exactly what they sound like: automatic robotic grill cleaners. I call it Roomba for your grill. They're a bit silly, but hey, at least they're on sale!

Your intrepid reporter saying so long from the 2017 New York Luxury Technology Show.