Atlas runs. SpotMini opens door. Boston Dynamics' has a knack for making robots that both delight and make us fear the future machine apocalypse. 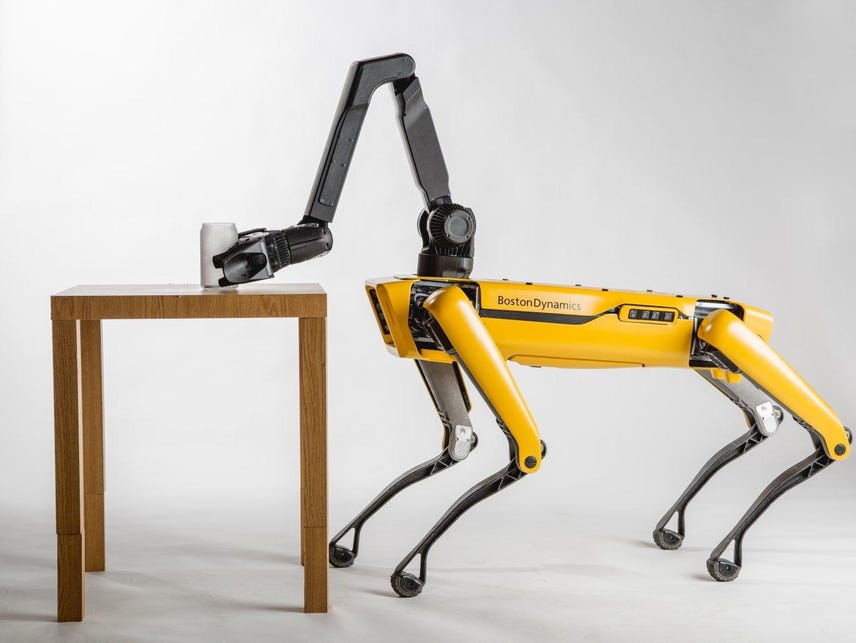 Boston Dynamics builds robots that can walk, climb, run, jump, carry heavy loads and even open doors and do backflips. These creations are impressive, sometimes amusing and occasionally a little bit creepy.

As we meet each robot, we will assign it a humorous Robopocalypse Rating (on a scale of 1 to 10) based on its future threat level to humanity.

There's something both endearing and disconcerting about SpotMini, a dog-like robot that has proven its prowess at opening doors. It's a smaller version of its big brother-bot Spot. It can pick up objects with an optional head-mounted arm that makes it look like some sort of weird giraffe.

"SpotMini is the quietest robot we have built," says Boston Dynamics, so you won't hear it coming for you in the dark.

Robopocalypse Rating 5 since it's kind of cute and can only go 90 minutes on a charge.

Here's SpotMini without its extendable arm. This version of the bot is more pug-like, with a squished-in face. It's also less threatening, since it can't reach out and open the door you're hiding behind.

In case you want to get to know your future overlords a little better, Boston Dynamics says the SpotMinis will go on sale in 2019.

Atlas was voted "Robot most likely to replace humankind" in his senior yearbook. Boston Dynamics calls this two-legged, two-armed creation "the world's most dynamic humanoid."

Atlas incorporates 3D-printed parts that help save weight and make the machine more compact. It's very good at keeping its balance and can navigate rough terrain and perform backflips better than most NFL prospects. And, oh yes, a new video shows it can run, too.

Robopocalypse Rating 9 since it probably thinks it's better than us.

If you see Atlas walking towards you, don't turn your back or run. It may be able to sense fear. It's getting more agile all the time and may one day be able to catch even Usain Bolt. Your best bet is to try reasoning with it, or hope it runs out of battery.

Despite its awkward proportions, Handle is actually a very helpful robot that uses a combination of wheels and legs to master different terrains. Boston Dynamics says Handle "has the best of both worlds."

One of Handle's greatest charms is its ability to pick up heavy loads weighing up to 100 pounds (45 kilograms). Hopefully, you weigh more than that.

Robopocalypse Rating 4 since it's fast on pavement, but more interested in carrying your moving boxes than running you over.

See! Here's Handle holding a box, which looks really innocuous. Just remember to politely decline if it offers you a hug. You won't hurt its feelings. It doesn't have any.

Spot is one of Boston Dynamics' most recognizable robots besides Atlas and SpotMini. It has a dog-like shape and what the company describes as "extraordinary rough terrain mobility and super-human stability."

Robopocalypse Rating 7 since it's big enough to push you over. Would have ranked higher, but it likes dogs.

Here's Spot out for jaunt with a human companion, which gives you a good idea of the robot's scale. They seem to be getting along well, which is promising. The human even seems to be smiling a little. The future is looking less bleak.

What animal does this remind you of? A bull? A warthog? This robust robot is called LS3, which stands for "Legged Squad Support Systems." It's made to haul heavy loads over rugged terrain and is powered by an engine rather than batteries.

LS3 is the pack animal of the Boston Dynamics lineup and it was created with military needs in mind.

Robopocalypse Rating 7 since it has military training, but is too loud to creep up on you.

LS3 gets a push

You're going to need a lot of help if you think you can push LS3 over. This tough bot is built to compensate for extraordinary forces.

This is WildCat, which Boston Dynamics reminds us is "the world's fastest quadraped robot." It can reach speeds of nearly 20 mph (32 kph) and runs in a horse-like fashion. WildCat's engine burns methanol and makes quite a racket.

Just keep in mind that WildCat was based on a tethered prototype robot called Cheetah that ran in controlled conditions on a treadmill and hit a speed of nearly 30 mph (48 kph).

Robopocalypse Rating 8 because if they figure out how to hunt in packs, we're through.

Cheetah on the prowl

Here's Cheetah, the robot that can outrun our greatest track athletes. Thank goodness it's contained.

BigDog has a nice name. It conjures up images of Clifford or Scooby-Doo. It's the size of a small mule. This gas-powered bot was one of the earliest to venture out of Boston Dynamics' labs and test its prowess in the real world. It can carry heavy loads and navigate tricky landscapes.

Robopocalypse Rating 4 since it's an earlier model, kind of like the original Sony Aibo.

This photo makes it look like BigDogs are social robots, which gives us something in common with them.

Small, but mighty. SandFlea is a bouncy bot that can cruise along like a radio-controlled vehicle, but then jump into the air like a tiny mechanical Superman. We're not talking small leaps here, either. It can get up on the roof of a house.

Robopocalypse Rating 2 since it's out of production.

In case you didn't believe in SandFlea's jumping ability, here's a photo of it looking like a UFO as it flies through the air.

RHex here has a disarming face, like it has two eyes and a little nose in the center. This six-legged robot features a clever design that helps it climb over all sorts of obstacles. It can handle bad weather, water, dirt, swamps and mud. Boston Dynamics says RHex "devours rough terrain."

Robopocalypse Rating 10 since there's nowhere you can hide from RHex.

Here's RHex climbing over an obstacle with its clever curvy legs. If RHex and SandFlea ever get together and combine themselves into one jumping, climbing robot, then we might as well resign ourselves to our fate as robot servants for all time.

93 Photos
Movies Coming in 2022 From Marvel, Netflix, DC and More