Show Us Yours: Chris Majestic considers his home theater low to midrange, but we found it mighty impressive, especially since he put it all together himself.

This is Chris Majestic, a technology and home theater enthusiast from Baltimore, Maryland who has his own YouTube channel, Majestechs. He considers his home theater in the "low to mid range," but he's being a little modest.

He's got a 7.2.4 Dolby Atmos setup with 8 seats, a 135-inch screen and an Optoma UHD60 4K projector. He put together the system over the years and although it's not finished, he says he's happy with its progress so far.

Note that Chris performs reviews of tech gear on his channel. Some of the products he reviews, and some of the gear featured in his showcase, has been supplied by manufacturers.

He's got a set of three Seatcraft Venetian home-theater seats in the front row. Chris says the seats are very comfortable and come with LED lighting, cup holders, tray tables and storage. They're among the most affordable leather home-theater seats out there. He notes that since the blue LEDs underneath the seats can be distracting, they're usually powered off.

View from the front row. The front row is about 10 feet away from the screen. "Some people think this is too close," Chris says, "but every person who's ever sat there has told me it's the perfect distance for my screen. I think it has a real movie theater feel."

You can see the entire screen from the second row, even while reclining. The movie poster on the left is the Black Panther. The poster on the right is a collage of famous rap artists from the 80s and 90s.

Shot from the back of the theater-and-game room near the snack bar. Most of the room can be seen in this shot.

Pool table and snack bar area in the back of the room. The flag on the wall is the Ghanian flag (Chris' wife is from Ghana). The TV is a 55-inch 4K TCL Roku TV. This TV was placed here since it can be difficult to see the theater screen from the back of the room. The TV is connected to Zone2 of the Denon Home Theater Receiver and can mirror the home theater screen or show an independent source. The Klipsch RP-150M bookshelf speakers are used as rear-surround channels.

View of the front of the room from the rear. The pool table gets very little use but Chris says he'll never part with it. The posters on the wall from right to left include: Notorious B.I.G.'s "Ready To Die" album cover and Muhammad Ali's underwater photo.

The screen is a 135-inch Borderless Elite Screen in Cinegray. The LEDs around the screen are remotely dimmable and color changeable by voice using the Amazon Echo or Google Home. They are also linked to a Harmony Hub so they can be turned on or dimmed when an activity starts or stops.

The 135-inch Elite Screens Edge-Free Cinegray screen works well with Chris' Optoma UHD60. Since the Optoma doesn't have the best black levels, the gray screen helps a little with blacks while still providing a nice and bright image with colors that pop, he says. The screen has a slanted back that makes it easy to install and there's an LED strip behind it.

Optoma UHD60 4K DLP projector. It's connected to a Denon X6200W using a 33-foot RUIPRO fiber-optic HDMI cable for 4K HDR from a Nvidia Shield TV Pro. Chris says the the UHD60 is a great projector for the money.

"Although the HDR performance isn't quite there yet, the clarity is amazing if you're on a budget," he adds. "I'm just patiently waiting for a native 4K chip projector with a retail price less than $2,000."

See CNET's full review of the UHD60 for more.

Another look at the Optoma projector.

View of the back of the room from the front corner. The riser for the second row of seating is modular and can be unplugged and moved if necessary. Just like the LED lights around the screen, the ones around the riser are remotely dimmable. You can change their color by voice and they're linked to the Harmony Hub.

Close-up of the center channel.

The overhead Dolby Atmos height channel speakers (Polk RCi80) can be seen in this photo. They are wired to the Audiosource two-channel amplifier and processed by the Denon X6200W Receiver.

Turtle Beach 800x headphones, Xbox controllers and Logitech Harmony Hub Top are on top of cabinet. There's a Fios HD set-top box on 2nd shelf and a Xbox One S on the bottom shelf.

"I think the Xbox One S is an underrated Blu-ray player," Chris says. "Sure, it's no Oppo, but considering I don't watch many Blu-rays and the fact that it has 4K and Atmos makes it a great option."

Klipsch R-115SW subwoofers. "These subs are so powerful that I had to get a dedicated circuit installed just to watch a movie without tripping a breaker," Chris says. "They are incredibly powerful and sound great. If I had to be honest, two of them is definitely overkill, which definitely fits my personality."

The second row of seating is different from the front. They're Palliser Pacifico powered Leather recliners. Chris says they're, "simple but very comfortable and reliable."

A Denon X6200W Receiver (bottom shelf) is used for the 7.2.4 Dolby Atmos setup. Both the Optoma UHD60 and 55-inch TCL Roku TV are connected to the video outputs of the receiver. The Nvidia Shield Pro (first shelf) is used for streaming 4K content from Plex, Netflix, Vudu and YouTube. Amazon Echo Dot and Google Home Mini (top of cabinet) are used for voice control of all components including lighting, power, volume and channel surfing.

"The Denon X6200W is a great receiver," Chris says. "It has most of the features that I was looking for and even though it's only a 9 channel amp, it can process up to 11.2 so I was able to add an inexpensive 2 channel amplifier for 7.2.4 Dolby Atmos."

Angled view of the screen, speakers and media cabinet.

Chris says: "Although the Dolby Atmos Speakers aren't as believable as actual in-ceiling speakers they do a pretty good job. Overall these are nice and detailed speakers. Some people feel like they are a little too bright or harsh but they sound amazing to my ears."

Another angle of the home theater area from behind the 2nd row. Movie posters from some of Chris' favorite movies can be seen from this angle. They include: Fight Club, Inception, Coming To America and Black Panther.

View from the screen looking back.

Here's Chris' full list of equipment with links to Amazon if you want to check the equipment out online. 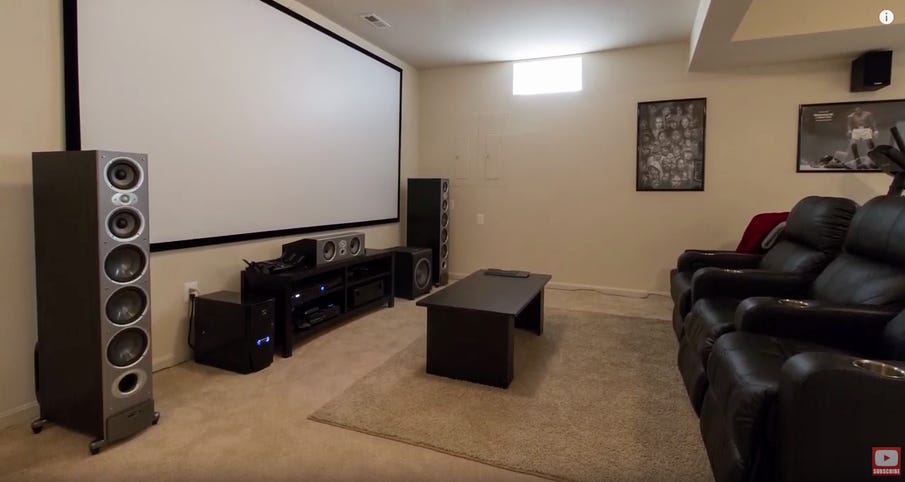 That's it folks. As a little bonus, here's a video from Chris' YouTube channel that walks you through his theater, from concept to construction to what it looks like today.

40 Photos
Movies Coming in 2022 From Marvel, Netflix, DC and More