With its revamped style, smooth powertrain and impressive roster of features, the Sentra is a competent daily driver for folks on a budget.

Nissan's been on a bit of a small-car tear lately, having impressed me with the Kicks crossover and Versa sedan. The next commuter-mobile to get a glow-up is the Sentra. Once destined for rental car stardom, with improvements in the looks, powertrain and technology departments, the Sentra is now a truly solid contender.

The 2020 model year marks the beginning of the Sentra's eighth generation, and it brings with it a simplified model lineup. With the new car, only S, SV and SR trims are offered -- no Turbo, no Nismo.

The Sentra gets a whole new design, as well. It's about two inches lower and wider than its predecessor, and gets a skosh longer, as well. The grille, surrounded by available LED headlamps, gets bigger, echoing the "v-motion" design of its larger siblings, the Maxima and Altima. Like the subcompact Kicks crossover, the Sentra has the option of a "floating" black roof over orange, gray or white paint, in addition to some full-body color schemes.

Watch this: Checking the Nissan Connect tech in the 2020 Sentra sedan
03:59 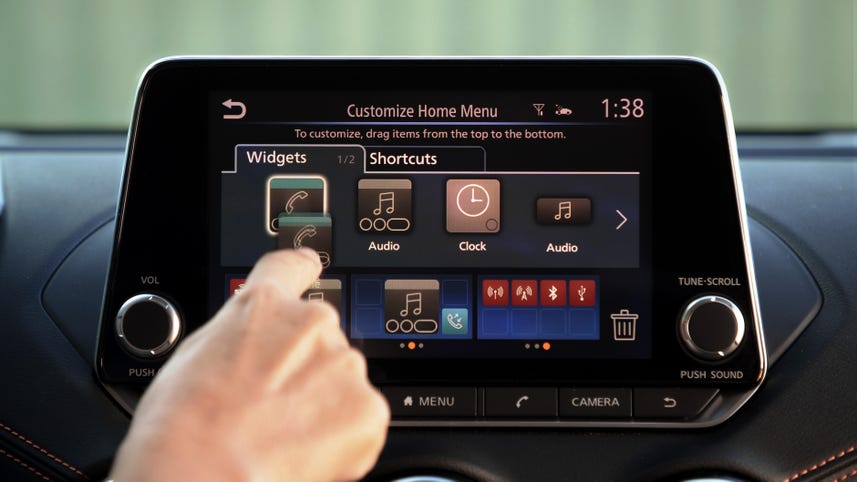 What's even more impressive, however, is the new interior. It's actually stylish, with available quilted leather seats, contrasting orange stitching and a flat-bottom steering wheel. I wouldn't say the interior is luxurious -- there are too many hard plastics and not nearly enough features -- but it's comfortable enough for a commuter car. Nissan's "Zero-Gravity" seats are standard and they're definitely the most comfortable chairs for this price. My SR trim gets heated front seats, a heated steering wheel and a sunroof as part of its premium package. Storage is plentiful, especially in the center console, which is deep enough to hold Roadshow's (OK, my) favorite snacks: Cheez-Its and Diet Dr. Pepper.

I'm not disappointed when the rubber hits the road, either. The Sentra isn't necessarily a fun car to drive, but it's competent. A new 2.0-liter four-cylinder engine replaces last year's 1.8-liter I4 and it ekes out 149 horsepower and 146 pound-feet of torque. A new multilink independent rear suspension stands in lieu of the old torsion-beam setup, so the ride is much smoother. When it comes to back roads, the Sentra exhibits a surprising lack of body roll, and while the steering isn't chatty, it's nicely weighted and has a good on-center feel.

The power gets down to the pavement through Nissan's now-ubiquitous continuously variable transmission; the old six-speed manual option has been nixed. The good news is that the CVT in the Sentra does a reasonably good job at mimicking a standard stepped automatic. There is an unmarked button on the gear shift that puts the Sentra into Sport mode, but it doesn't seem to do much except remap the transmission to "shift" at a higher rpm.

The Nissan Safety Shield 360 suite of driver-assistance features is standard on all Sentra trims, featuring automatic emergency braking with pedestrian detection, blind-spot warning, rear cross-traffic alert, lane-departure warning, high beam assist and rear automatic braking. If you want adaptive cruise control you'll have to bump up to the SV or SR trim while the SR gives drivers the option of a 360-degree camera. The adaptive cruise works great, bringing me to a full stop in heavy traffic, but the automatic emergency braking panicked once, slamming on the brakes when I was fully in control and in no danger of rear-ending the car in front of me. The surround-view camera has room for improvement, offering up a blurry view of what's around the car.

The in-dash Nissan Connect infotainment system on an available 8-inch screen is only fine. It's certainly better than the Entune system in the Toyota Corolla, but it's no improvement over what you find in a Honda Civic. Apple CarPlay and Android Auto are both here, which is good, as embedded navigation isn't available. The screen itself can be unresponsive and drivers are often forced to tap the screen multiple times for actions that should be simple. For example, when I push the audio shortcut button, it doesn't go to the source that I'm already listening to (be it satellite, FM, Bluetooth or whatever) but instead to the source option page itself. The more I'm tapping buttons, the more my eyes are off the road.

What's really appealing about the 2020 Sentra is its price. You could get a nicely equipped SR without the premium package (heated seats and steering wheel, LED headlights, sunroof) for under $23,000, including $925 for destination. Even fully loaded, the Sentra doesn't crest $25,000. That's pretty darn good.

Of course, the competition in this class is really fierce. The Mazda3 and Honda Civic are certainly the best driver's cars, the latter being offered in sporty Si trim for about $26,000 all in. The Toyota Corolla is a perennial favorite and it's all new for 2020, as well. Don't discount the Hyundai Elantra, either, which starts at a rock-bottom $17,900, plus destination.

If your latest experience with a Sentra has been in the back seat of a Lyft, I think you'll be surprised by this upgraded 2020 model. The looks are much improved, as are the engine and ride quality. While the infotainment could use some tweaking, the driver-assistance features are all there as standard. It may not put a grin on your face every time you drive it, but it certainly is a good value, and that can make some people just as happy.