The redesigned 2019 Jetta is a return to form for VW's compact sedan.

Witness the Return of the Jetta. The new 2019 VW Jetta model feels like a return to form for the sedan after a generation of mild neglect.

Tech and comfort are the 2019 VW Jetta's strongest points. Fuel economy is up to 40 mpg highway. The new chassis rides smoothly and comfortably.

The 1.4T and eight-speed transmission combo isn't the most fun. The trunk hinge seems poorly designed.

The 2019 Volkswagen Jetta feels more like a move upscale, rather just than a move up in scale, and is once again a solid choice for an efficient and smart compact sedan.

Volkswagen's compact sedan is now bigger; not noticeably so, but with just enough extra room for people and cargo. However, the new Jetta feels more like a move upscale, rather than just a move up in scale. The exterior design, cabin materials and tech are now on par with VW's best.

Where the last-generation Jetta felt like an afterthought in Volkswagen's North American lineup -- slumming it on an outdated platform with old tech -- this new model feels like a fully-fledged, well-rounded member of the family.

The biggest performance news here is that the Jetta is finally on the MQB platform that underpins most of Volkswagen's new models, from the Golf to the Tiguan, and even the larger Atlas SUV.

The increased cabin space isn't really noticeable up front, but an extra 1.3 inches of rear legroom is a nice addition. The trunk offers 14.1 cubic feet of space, which isn't as capacious as the outgoing Jetta's 15.7, but combined with rear seats that fold flat, means there's a ton of room, not to mention a nice, wide opening that makes it easy to load bulky items. Just beware the weak hinge springs -- the trunk won't stay open unless it's pushed all the way up. On more than a few occasions, the trunk lid came down and hit me on the head while extracting cargo.

Not every driver wants something "sport-tuned." The Jetta aims for comfort, and it delivers. The Jetta's smooth ride makes longer hauls a relaxing experience. It's agile enough, with the same responsive steering I've enjoyed in other MQB-based vehicles, but overall pretty chill.

Under the hood you'll find VW's 1.4-liter turbocharged I4 engine, an updated version of the 1.4 used in last year's Jetta. Power is, surprisingly, down to 147 horsepower (compared to 150 in the 2018 Jetta) while torque is unchanged at 184 pound-feet. I appreciate torque more than ponies for commuter cars like this, and the Jetta still boasts a healthy number of pound-feet for a car of this size and weight -- especially since the new Jetta is 66 pounds lighter for 2019.

However, the low-displacement 1.4T depends heavily on the eight-speed automatic transmission to translate that torque into real-world performance. There is a six-speed manual available, but the vast majority of Jetta buyers will end up with that automatic and, with programming skewed toward efficiency, you should probably temper your performance expectations. In its Comfort or Eco settings, the Jetta accelerates smoothly and quietly enough -- and should deliver EPA-estimated fuel economy ratings of 30 mpg city, 40 mpg highway and 34 mpg combined -- but passing and merging in these modes can feel a bit sedate.

Sport mode keeps the engine's revs slightly elevated for a more responsive throttle and better acceleration. This setting feels great around town and pretty darn good on a fast country road with smooth, sweeping bends. But, even in the Sport setting, both the suspension and the powertrain feel ill-suited for really "sporty" driving on my favorite mountain roads. A combination of strong understeer when pushed hard through tighter bends and tall, economy-focused gear ratios leaving me wanting for torque when exiting a corner.

The 2019 Jetta's cabin somewhat shakes up the classic (read: dull) VW interior design with modern, angular details and a heavy focus on tech. Look closely and you can see where Volkswagen attempted to cut cost -- the rubbery dashboard material and some panel plastics, for example -- but really, you get what you pay for. The Jetta feels perfectly fine considering its sub-$20,000 starting price, especially when you consider all the technology onboard.

I like the subtle, gentle assistance of the lane-keeping assist system. The stop-and-go adaptive cruise control, meanwhile, is a bit too jerky for my liking in heavy traffic, but works well at higher speeds on the highway.

Watch this: Check out Volkswagen's Digital Cockpit tech in the 2019 Jetta
03:32 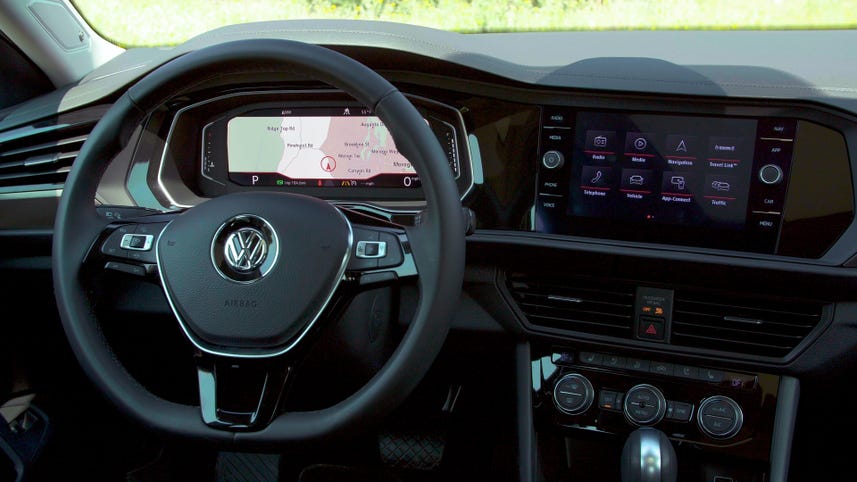 The highlight of the Jetta's cabin is the suite of dashboard tech. VW's App-Connect infotainment system comes standard, which means that even the least-expensive base model is compatible with Android Auto, Apple CarPlay and MirrorLink, which allows drivers to bring their own smartphone maps and audio streaming apps to the dashboard.

Onboard navigation is pretty good, especially considering its integration with the 10-inch Digital Cockpit LCD instrument cluster. Much like Audi's Virtual Cockpit, this second screen in front of the driver allows users to view and control many of the available infotainment features -- from navigation to hands-free calling to media selection -- without taking a hand off the wheel or an eye very far off the road.

Digital Cockpit isn't as powerful as Audi's system -- you can't display maps on both the dashboard and the instrument cluster at the same time, for example, and the screen transitions between modes are a hair slower -- but the functionality is still very good. Much better than most digital instrument clusters you'd find at this price point, anyway.

Meanwhile, drivers also have access to Volkswagen's Car-Net suite of connected telematics features, including subscription-based remote vehicle monitoring functions like door locking or unlocking via smartphone app and more. You can even get a smartphone notification if you've left your windows or sunroof open and the forecast calls for rain.

Tech, as it turns out, is the new Jetta's strongest point. That's a good thing.

The 2019 VW Jetta S starts at $19,395 (including an $850 destination charge), which gets you out the door with Volkswagen's App-Connect tech and a fairly basic suite of amenities. For buyers on a budget, this is a pretty good deal.

However, I'd recommend looking at the loaded SEL Premium model that I tested. At $27,795, you get all of the available safety tech, nicer cabin materials, the larger infotainment system and that awesome Digital Cockpit. It may be the most expensive model, but still feels like a bargain considering just how much stuff you get.

A solid choice, once again

The Jetta faces strong competition against a wide variety of cars. On one hand, it's an excellent alternative to compact sedans like the Honda Civic, Hyundai Elantra or Kia Forte. But in its most-loaded spec, could be considered a less-expensive alternative to larger, four-cylinder-powered cars like the Honda Accord, Hyundai Sonata or Toyota Camry.

Either way, the 2019 Jetta is definitely worth your attention. Its comfortable, efficient dynamics and modern suite of tech make it a really solid choice.